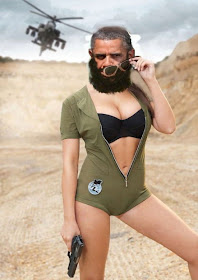 You have lived weeks in the future with this blog, now live months in telling you what took place, as now even CO Jones of Western Journalism has heard the rumors coming directly from inside the White House.

This operation was focused on many things and the chief of them deals with the disarming of American Soldiers in Afnamistan when Leon Panetta visited there. As this blog exposed there were numbers of ops who were furious over what the murder of bin Laden's corpse unleashed in the retaliation mass assassination of the Obama SEALS in Team Six.

The regime was operating in fear, and it is why Muchelle was exposed in that bizarre reach out to dead Soldiers families in pretending the regime actually cared for the Soldiers. They were afraid people in this group were going to go postal.
That is what was part of this Chris Stevens hostage set up, as Obama has a number of ghosts he exercises in wanting to replace every President in his living history.
Teddy Kennedy got the John Kennedy mantel. The Obamacare was LBJ. Nixon is the machinations of the regime in covering up his crimes. Carter is this Iranian hostage scenario. Reagan is disarmament. Clinton is black President and Bush41 and 43 is the realignment of the Middle East with Obama's people and not Bush people.

Analgate had many facets to it in planning as it was replacing bin Laden's bounce, but it was more in the Muslim Brotherhood was contracting for greater payments. The associates who set this drama up were the same negotiating team who wet up the drug train for al Qaeda out of Obama's narco communists in South America and al Qaeda running it in Africa and Asia out of Afghanistan.

This operation tails back into Lebanon and Egypt as staging points, and it was in this mix that the same Islamocommunists staged the murder and rape as they knew Obama was going to be blackmail material. This is about Iran and their safeguarding and you can find not far in this old KGB contractors who provided intelligence support, as they are furious yet over Khadaffi and what is taking place in Syria with Assad.
They see their former billionaire partners being picked off and it akin to what the KGB did in neutralizing Clinton policy in selling nukes to Iraq and Iran.

In layers, this was like Obama's birther documents as much as the 300 million he took in to his 2008 campaign which was laundered off of credit cards. The same contractors who assisted Obama have been the same contractors starting all of these revolutions, and the same corp group who Obama contracted with in trusting them.

It really pissed these people off in what Obama did on that God and Jew plank on the DNC convention, as this was Palestine's moment and it started the hot head campaign which did not take a great deal of fanning the flames to "teach Obama a lesson", so he would come through with the nation for Palestinians the next time.

It was compartmentalized and handed to Obama. For effect, he was not told the specifics, but only hostages would be taken and rescued.
Hillary Clinton knows a great deal more in her intelligence end.

I have mentioned that Panetta and Patraeus know a great deal more, in the digitals coming out of the chatter there, spilled the greater portion of this tale.

This is now the story which is leaking out in torrents confirming what this blog has broken as Egypt, Libya and Lebanon blackmail Obama. Iran is not far behind in the machinations.

Hillary Clinton is running scared on this part of it and is why she is eating the blame. The large players know and they know the Clintons took the security away for this Obama hostage taking, and they know Hillary told Obama it was in exchange for a new position.
If Obama won, Hillary was looking at the Supreme Court in what the payment was to be she knew she would never collect on, as it had to do with the reality of this was about Romney getting elected as the hostage crisis was not to end until January 2013.

There are still in the ledger Obama has, a layout of hostages in the Rose Garden as that location was most important to Obama dealing with Jimmy Carter held hostage there in his Rose Garden Strategy.

Mr Obama has been making a great deal of enemies in the old Muslim order. This had Palestinian catalyst, but what took place in Benghazi had players who took down the Team Six helo.

All of this is starting to spill out. Was first here as always.

I received a phone call from an old friend that has been in Washington D.C. for years and is fairly well-connected politically. What she told me was ugly and sinister, yet very compelling. She said she had received information from someone high up in White House circles, and wanted my thoughts. No, there is no leaked email, no concrete proof, and this article is based on “hearsay.” I’m not one that usually engages in or repeats hearsay, but if this is true, it could be the biggest story in 50 years.
According to her, Barack Obama, wanting an “October Surprise,” had secretly arranged with the Muslim Brotherhood for a kidnapping of our ambassador. Then sometime in October before the election Obama was to orchestrate some great military action to rescue Ambassador Stevens, causing all of America to cheer Obama’s strong foreign policy and bravery and making him look like a hero. After all, his supposed killing of Osama Bin Laden bounce had long since faded. Thus, sweeping him to victory in November. Imagine the headlines and talking points. The election would be a lock. The Muslim Brotherhood has every reason to want Obama re-elected in November and have an American President sympathetic to their causes. Not to mention an administration filled with Muslim appeasers. Therefore, they agreed to aid in these theatrics. Unfortunately for Ambassador Stevens and three others, the Brotherhood could not control the hired thugs that were to perform the kidnapping and things escalated and four American lives were lost. Panic set in at the White House and with little time to place blame as far away from Obama as they could, they settled on a ridiculous fairy tale about an irrelevant video posted four months prior on YouTube and ran with it. Barack Obama even ran with it after evidence showed he knew better and ran with it all the way to his speech at the U.N.
So now, they are admitting it was a terrorist attack. They are admitting that the State Department had denied requests for more security from Washington, but nobody told them. Blame anyone but Barack Obama. I’m betting the White House is smirking and perfectly happy to be accused of having a breakdown in communication as opposed to the alternative. This scenario, if true, more than satisfies my common sense gland.