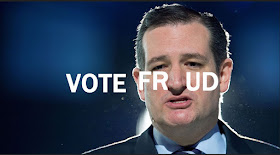 
After the matter anti matter exclusive on the Lame Cherry exposing more Ted Cruz vote fraud in Kansas  and Maine, it is apparent in the monitoring of various sites like Conservative Tree House, that one little Drew was all the Boogers could send out to throw down the CIA 'conspiracy theory' with absolutely no refutation of the evidence.

The fact is, that as a federal prosecutor, you can not just indict a potato as Rush Limbaugh, voucher for Ted Cruz likes to say, because there indeed has to be evidence, and on the evidence which was posted here, Ted Cruz would indeed be indicted on vote fraud.

I will explain this further in, what took place in Kansas and Maine is a matter of mathematical projections which are absolute. It is as Spock stated on Star Trek, "If I drop a hammer on a positive gravity planet, I need not see it fall, because the laws of gravity prove it will fall".

This is what physics is as a science. It is cause and effect. It is being able to protect in numbers, a reality in the physical universe.

For example, Donald Trump is a simple factor of A. A multiplied by the known multiplication of GOP debates, GOP turn out in primaries, and Donald Trump events running 25 to 35,000 people, all provide a scientific formula of A is Trump, B is the multiplication factor or multiplicand and C would be the answer or product in huge numbers of people

So A times B equals C which is huge Trump numbers. Nowhere is C transformed in this equation to Ted Cruz victories, as he is not anywhere in the factors of A or B.

Therefore it is logically and statistically impossible for Ted Cruz to be around 28% in the polls nationwide at best, and closer to 22%, would he be able to produce 35,000 votes in Kansas for himself, when in 2012, an anti Romney surge for Rick Santorum produced only 30,000 votes.
That same reality is in Maine where once again in the A times B equals Trump super numbers, Cruz somehow ended up with more votes in Maine, than in another anti Romney vote which went to Ron Paul.

You do not drop a hammer on positive gravity planet and when it hits the ground, it does not turn into a taco by a Ted Cruz miracle.

The miracle of a federal prosecutor in Ted Cruz crimes, would be evidenced to a jury, that somehow Ted Cruz is putting his name on Donald Trump numbers in the C product.

TL and I broke the story on the e vote program, which Andreu Riera of Spain created a vote counter which was based upon his casino gambling program.....meaning the program was to play the odds, so the house could generate wins at a 15% margin, and therefore always win.
Riera was murdered in Spain, and his program was stolen, and as I proved not one Conservative in the world ever won an election after this program was installed, and only leftists did. The reason is the program runs a 15% Obama or liberal tilt. They might not win all the elections, but the democrats tightened every election up, and some like Heidi Heidkamp in North Dakota actually stole a Senate seat from a Republican, due to this house 15%.

This is what Marco Rubio was running in Iowa in a few e vote locations with Microsoft. There was something like this going on with Ted Cruz in Texas as the margins were in that 15% vote flip. What took place in Kansas though is beyond the Riera protocols which Microsoft built their pattern generator on. The evidence in A x B = C, did produce Donald Trump numbers, but what was in "This does not compute" is how Ted Cruz got his name on those numbers.

I believe the simpletons who run this vote fraud, were not intelligent enough to create a new Riera program as it was maxed out, and they needed something fast. The quick program was instead to write code which simply transferred votes from Donald Trump to Ted Cruz wholesale.
This was not allowed to happen in all states or massive revolt would have taken place, but instead in psychology two states were picked to confuse voters, and you will notice in this little oddity, that in order to cover up the crime, Bernie Sanders was awarded a few nothing states to make this look like Hillary Clinton was having the same problems as Donald Trump.

Now we though enter into the world of crimes. The same crimes in 2012 when Newt Gingrich was handed an eastern state in vote fraud from Romney. Gingrich knew this and said nothing, but the crime which Gingrich did not commit was used to leverage him out of the race and to become a mouth whore for Big Frac.

For the Cruz Booger and that includes that head up his ass Tom Gresham of Gun Talk who was protesting American Donald Trump in Nuremberg Germany at a gun show....in all Gresham's affluence and Big Obama Gun money he feeds off of, there is a reality in this, in Ted Cruz knows blessed sick that he stole Iowa. Ted Cruz knew there was vote fraud in Alaska, Texas and Oklahoma.......and Ted Cruz is damned certain now that there was e vote hijacking which took place for his benefit in Kansas and Maine..

I will whisper something to you, in case you need reminding in Ted Cruz is owned by Robert Mercer, the billionaire debt trader on Wall Street. Do you need reminding what Robert Mercer is?
Robert Mercer is a computer programmer who write programs on internet trading in super computers to rob all of you of your investments.
Once again on the federal prosecutor before a grand jury, how would you vote when presented with the mathematical evidence that A times B equals C in a massive Trump victory, and somehow a Ted Cruz massive vote count took place, and these votes counted in massive numbers on computer voting......and Ted Cruz's billionaire owner Robert Mercer just so happens to be a genius, who employs geniuses who write the most advanced codex in the world..........do you think it would be that hard to connect the dots for you in the jury to conclude that there was motive, opportunity, skills and the net result to hand down an indictment on Ted Cruz for vote fraud?

You bet there would be and that is what the indictment would read.

The reason Ted Cruz is scared, is proven by the absence of his Boogers on the net. They have disappeared. They know Cruz is a crook, a liar, a foreigner and a vote stealer. The Boogers have vanished and all that is left are the few minders posting things in trying to shout people down...........and that is the fear factor in this, because Ted Cruz just had the can tied to his tail in felony crimes.
For those who need further explanation, it is one thing to have a billionaire own you, and it is another thing for the cartel to have helped you engage in crimes for which the entire American public would throw you to the courts for in being jailed for these crimes for the rest of your life. Ted Cruz like all of these blackmailed politicians knows he is owned body and soul now, and he will do exactly as he is ordered to, more than Obamatrade and more than Obamacare. He is the whore on his knees producing that huge sucking sound.

For the Boogers, your Ted is finished. He will never give you a thing any more than Rubio or HW Bush would. Harvard Ted Cruz was caught by the elite in a trap he walked into willingly.

That is the evidence in this and from the Limbaugh boys in Rush and David, to that Khazaran mafia Mark Levin, to Glenn Beck all whoring for their billionaire insider pimps for Ted Cruz, in just how this is going, and was set up as I warned all of you, that Cruz has one purpose and that was to take votes from Donald Trump for a future character to appear at the GOPliters convention without Donald Trump.
I am trying to stop something happening to Donald Trump, but it is certain now that the Cruz Boogers are going to be blamed for it, and so will the foreign asset Ted Cruz.

If you want PROOF of what I am talking about in Kansas, I will point you to the reality of online proof that PRELIMINARY VOTES WERE POSTED FOR MINNESOTA ONE DAY BEFORE THE DIEBOLD VOTING MACHINES STOLE MINNESOTA FOR MARCO RUBIO in another massive vote theft against Donald Trump and Americans.

Cruz in Kansas and Maine, and Iowa and fag Rubio connected at the hip to Iowa, and into Minnesota vote fraud...........vote fraud that got us Al Franken with more votes than Minnesotans and now the Minnesota Sec. of State pleading for new voting machines.


Ted Cruz is scared and you Cruz Boogers had better be too with all your tracks online, because when Attorney General Chris Christie comes to prosecute, you are going down too.