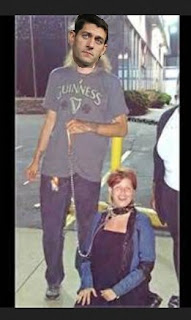 
I was so pleased to find out today in this world of Black Lives Matter, Every Person's Life Matters, that Paul Ryan has decided that all of you are heartless cold blooded beasts in you do not want to protect your children, but Paul Ryan gets to build a wall on his property as only he cares about his white children who number three.
Only Paul Ryan Lives Matter.

Yes Donald Trump is the problem according to Paul Ryan the cuckservatives in the Trump Wall to protect America, but there is not any problem for rich man Paul Ryan doing the same thing in building a wall around his home.......not to protect it from Mexican and Muslim rapist invaders, but Paul Ryan needs a wall to protect himself from the People of Wisconsin.

Who knew all those Cheeseheads are equal to ISIS, MS 13 and al Qaeda, but thankfully to Paul Ryan, we now all can be assured that he and image Obama will be carrying out terror strikes on Milwaukee and Prairie du Chien.

This is always the image Obama, Whore of Clinton and Paul Ryan world. They get he Secret Service, the high walls, the disarming of Americans, but Americans get more rape cock Muslims and Mexicans, exposing all of our children to danger.

For women, that would be wives, sisters, mothers and I suppose lesbians, that Paul Ryan apparently only considers his offspring worth protecting, and his old lady, that would be the wife, never comes up in the thought process. I guess it is throw Mrs. Ryan over the wall to divert the raping foreign hordes.....or I guess terror Cheeseheads, as Paul Ryan makes his escape as women are expendable, and not even an after thought, as with Paul Ryan they are not even thought of at all.

I sincerely hope thee good People of Wisconsin primary this mysognist, American hating, offering all of their children up to rape cock, as Ryan's children are more important, than your children, and besides none of you give a damn about your family, because if you did you would be building a wall too.........not on the Mexican border, but where it really matters, on Paul Ryan's estate.

The sooner Paul Ryan goes to work for Big Koch at 5 million a year, the sooner we can have Chris Christie indict this treasonous fraud and put him safe and secure behind a nice big wall at Leavenworth Kansas.

Oh don't worry about the Ryan dogs, because they do get mentioned by Paul Ryan.......just not his Wife. I am sure though that women do make the Ryan list........probably somewhere after the remote and just before the Sunday paper that the dogs shit on.

“Having a backyard fence for three dogs and three kids is not a half-bad idea,” Ryan said during his Monday interview with Wisconsin’s NBC15.


As the thousands of you are not donating in appreciation of the risks I take and in saving your lives, perhaps find a way to post things like the above to rid America of Paul Ryan in the House and that would include donating to the guy trying to boot his American hater from public office.