Why Donald Trump Got His Ass Booted Out of Office 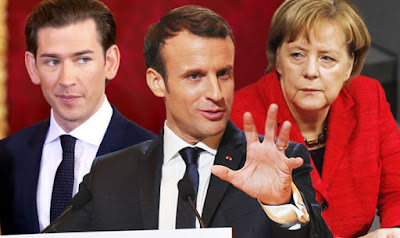 Like most of you in dealing with 5 years of Trump drama, I have had enough. I you listened to this blog, you have been behaving, paying your taxes and not making yourself an FBI target. In trying to recover from biological weapons and the fatigue of too long in producing this blog for God's Glory, I simply did not want to deal with the Great Reset as another alarm to to get worked up about.

I was on Rense's site and if I have wifi, I will see what Dick Allgire as Krypto King has to say about things, as he is a journalist, intelligent and remote views. He assesses thing correctly and he had on Davos recording of Klaus Schwab who is the brains behind George Soros and dictator Xi.

Allgire featured 3 words to listen for, and Schwab the German and Xi the Chinaman both seasoned their speeches with these terms. What they were saying was America should not lead, but that it should be a community of nations all having an equal say. China would like that, as they can Tibet all other smaller nations and Germany would adore a greater Liebenstraum to control the world.

I honestly was not paying attention to what the globalists were up to, but Allgire termed them Neo Feudalists which reflects the Feudal Few which have been featured here for years.

There are a few more terms to put into this to figure out what is going on, and the Durdan Bros have a  term for Great Reset as the Great Reflation.

You know that deflation is prices falling. You know that inflation is prices rising. So reflation is like a blow up doll, in she is flat so you reflate her. In other words, those who were behind building China's biological weapon's lab (Obama Biden) and those who made the plague (China) and those who spread it for their future hedge of forcing the world to it's new order (1%), are after killing the global economy in a term which has appeared in Coronavirus Deglobalized the World Economy, which was accomplished for what we are being reset to, based out of the cover of the United Nations.......in short they killed the economy and the ability to pay bills, so they can control the currency, the economies and therefore all the people, with some system. I will tell you what that is, after ZeroHedge.

By Michael Every of Rabobank

Today kicks off the annual World Economic Forum, which this time round is online and so can’t charge anyone $43 for a hotdog. Expect various iterations along the theme of  “Builders’ Bums Better” from the talking heads as the ‘Great Reset’ slash ‘Great Reflation’ is dangled before markets

The guy running this is German, Klaus Schwab, who is promoting Stakeholder Capitalism. He is also with Xi pushing something called,  Reorienting Corporate Boards for the Long Term. Remember those two terms as what you are going to have inflicted upon you, as John Kerry, the Comrade Klimate, will attend Davos for Pedo Joe Biden, which means Biden shutting down US oil production and for 100 days shutting down the economy in mask mandates, is re establishing all of Barack Obama's Super Depression in the United States.

Reorienting Boards for the Long Term

Companies are being pressed to deliver financially in ways that are more socially and environmentally responsible, and focused on long-term health. This session explored steps corporate leaders can take to build a more stakeholder-focused business environment.

As I was reading Schwab's manifesto, I was puzzled by it, until the Holy Ghost Inspired me to understand what Schwab was hiding as I knew these definitions under other ideology.

Schwab sums up his manifesto in an economy which works for progress, LEFTISM, first and people, "slave labor" and planet (environmentalism)

You have not linked this yet in what it is, but you will when I add the pieces.

Klaus Schwab discusses its history and relevance in this excerpt from the book Stakeholder Capitalism: A Global Economy that Works for Progress, People and Planet.

Schwab has 61 conglomerates, that is the world work force control and production. He has implemented via these conglomerates, NOT NATIONS, a legal enforcement for one environmental set of mandates, one mandate for social (peodphilia and homosexual) and governance or RULING everyone with these mandates, as you can not buy or sell or work if you do not submit.

I will tell you first, this is not communism. That may surprise you as Xi is a communist, Ask yourself though what system, and it is not capitalism as Schwab is clever in not alarming the markets or the populations, has corporations joined together under a governing system, which then rewards those corporations with taxpayer infused money for absolute profits, oriented in a force labor group?

If you still do not have a clue, I will give you the hint, in a certain leader seized power, and he started joining massive conglomerates like Bayer, IG Farben to his vision of a progressive and long term government, with massive spending in war build up, and he paid for this debt and economic expansion with peoples taken into custody, in the Poles, Slavs, French and Jews.

Yes what Klaus Schwab is implementing across the world is National Socialism or Nazism, which was very successful for Germany and Austria.

The World Economic Forum’s International Business Council has proposed a set of universal environmental, social and governance (ESG) metrics to allow companies in all industries and geographies to measure and report performance. This session looked at how companies should go about measuring and disclosing this information, and how investors and governments can come together to allow stakeholder capitalism to take root.

Klaus Schwab believes that 2021 will be a historical year in changing the philosophy of business. Accelerated by COVID-19, businesses will increasingly recognize the need for stakeholder capitalism.

Although the new metrics are just the first step, it will move stakeholder capitalism on from being just a concept - we can now "walk the talk", he said. 61 companies have already signed up.

What Davos is promoting by Klaus Schwab, dictator Xi and John Kerry for Pedo Joe Biden is bigger than nationalism is though, as the Germans were one people in the master race. What this is, is not NAZI, but GOSS, the Global Oriented Socialist State. This is a one world regime overthrowing governments by corporate control of work and finance, money generation, and directly sucking from government treasuries the money and the military power to promote and project this ideology.

We have been experiencing this betrayal of America for years, in conglomerates have only alliance to this interconnected commerce, than Americans, and in the election overthrow, their puppet politicians have zero allegiance to the Constitution and instead vote for what promotes the GOSS.

This is what they were planning in putting Trump into the White House, to make Nationalism a crime in the staged riots, and then to promote the "individuality" (breaking nations down to isolate them and make them submit) while implementing a manifesto where people become corporate commodities, until robots replace them.......they need people for the reason of not humanitarianism, but you get your digital allowance, are forced to spend it to the corporations, and this produces a ruling management of all humans. Think of it as a global concentration camp of forced labor and mandated buying.

The projection of this is, the 1% will have to have more of this virus bullshit to keep the lid on, more of Biden's war on Americans in Domestic Terrorism.....which is a source of free slave labor, and with a collapse to impoverish the competitor slightly rich, (known here as the richtard who do not donate to save their lives.) to implement digital currency control, what will follow not alone for the reason for looting Russia, China and the Mideast to balance the debt books, but population control and the first phase to shock peoples into accepting this global nazism, to save themselves.

None of this has to do with economics. This is a global financial system which will implement production quotas, living standards and consumption to benefit the system. This really is communism in managed poverty and stagnation, but it is hybridized nazism, or the SOCIO CONGLOMERATE as this blog has posted on for the past few years, who are now censoring you and keeping you from flying and taking your credit cards as you do not spend money as the order demands.

This is a huge story, but I doubt most tards will comprehend what has been revealed here. It was though why Donald Trump got his ass booted out of office as he would not have managed this for the 1% alone.

Thee Americans are not leading at Davos. It is Germans, Chicoms, French and Europa. The Americans under Joe Biden are following and Kerry is there to announce the US economy will not profit, in favor of equality of debt in all systems to promote GOSS.

This is once again anther Lame Cherry exclusive in matter anti matter.