Soros: Americans must die for his Investments 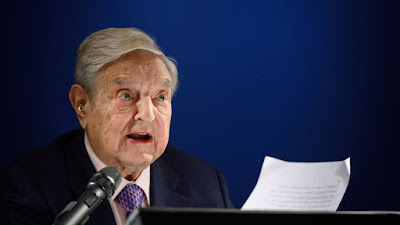 Xi stole my money so Americans must die so I can steal it back!

I should stop being stunned by the things I see taking place, but when I saw the right wing Hoover Institute providing a platform to nation rapist George Soros, I experienced once again how absolutely smoke and mirrors this entire stage theater is.

The projections of the fraud elections of 2022 appear to be heading that the "GOPliters" will be awarded a victory to drag all of you along with them. There will be promised impeachment of Dictator Biden, but all that gets you is Birther Harris. Nothing will happen, and it will probably force Biden to step down. If Birther Harris has any sense she should take the Black Robe exit and suck lezbo twat on John Roberts dick and Hamrod Clinton then can rematch with Donald John Trump to divert attention so they can start the war with China which society predator Soros is now advocating and the "right" is championing.

Far-left billionaire George Soros has demanded the replacement of Xi Jinping as leader of the Chinese Communist Party.In a speech delivered at the conservative Hoover Institution, Soros compared the upcoming 2022 Beijing Winter Olympics to the 1936 Olympics in Nazi Germany.Soros blasted Communist China as the “world’s most powerful authoritarian state” and “the greatest threat that open societies face today.”

Let us just review this for the dimwit.

President Ronald Reagan saved America from Rockefeller oil currency.  George HW Bush took over for the new world order. When Reagan was President, retired people were in Florida LIVING on their savings accounts in banks. Money was at reasonable interest and borrowers were making payments, banks were making money and people who saved could live on the savings.
Then HW rapine was installed. Interest rates went down. Money drove into the stock market, the market crashed robbing people. Banks lost money. That free money then flowed into China to make them into this cancer.

The father of Muslim war, Zbiginew Brzezinski, wanted China broke up before he died. Now George Soros wants regime change and the communist are not just going to throw out their dictator. That means war. That means the goading of Russia into war, will be joined by China and George Soros who was part of Bill Clinton shipping jobs to China, making a fortune in slave labor, destroying American in fraud elections, now is at Hoover championing an attack on the communists of Peking.

Why? Soros could not get his Shylock grasp on 5 G out of China, so Soros not dictating control, began going after China. Xi must have told Soros to go fuck himself and now Soros wants right wing America to die for his nation rapine and Hoover gave this thug a platform.

The handwriting is on the wall with this. The Lame Cherry is not going to support another war, which is robed in patriotism getting the last Americans slaughtered which began with these Goddamned wars with Hearst's Spanish American War, then World War I and II, Korea, Vietnam and the Bush Iraq wars forever that Dick Cheney advocated, and now we are at a Pentagon War with China and Russia, which is going four front with Iran against Saudi Arabia and North Korea into South Korea.

A decade ago George Soros like Birther Hussein Obama could not suck Chinese dick hard and long enough. They HATED America and praised these Reds in Peking. They funded this monster. They built this monster with cheap American money and they handed over American technology so that this war would be fought, and now they are waving the American Flag they wipe their asses ANTIFA and BLM asses with. It was Soros' ANTIFA that burned down America for Obama as Buffett's BLM lit the flame for Obama. They funded this insurrection and now after two years of hunting down Jan6 Patriots by their police state, they want the Jan6ers to go get nuked for their nation wealth distribution.

This is a warning of the future. Get away from this. Do not get sucked into this.

Soros: China has better functioning government than US

Nov 16, 2010 ... Soros even went so far as to say that at times China wields more power than the U.S. because of the political gridlock in Washington. "Today ...

Oct 13, 2021 ... China's economic and political footprint has expanded so quickly that ... and Soros's own criticism of the country's democratic decline.139.