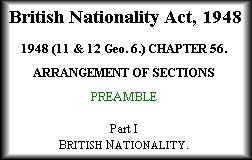 In the continued exclusive nature of this blog in revealing the legal nationality of Barack Hussein Obama, the following is offered to explain why he is legally disqualified from being President of the United States.

No one has in logic presented a more complete picture of the actions of Stanley Ann Dunham Obama in 1961 than this blog. Logic dictates a caring mother to be would not endanger her child, but have that child in Canada. Logic dictates if the mother is an obsessed female with a compulsive sexual fetish based in 3rd world dark skinned "pristine" peoples that she would subvert United States safeguards and enter into Canada, inform the British authorities she is the wife of a British subject of Kenya, therefore a British subject herself, and she will be flown home to Kenya to give birth to a British subject she is carrying.

The mandates of the Act of 1948 are clear, and, once an underage, then married wife of a British subject entered Canada to gain entranced to another colonial state in Kenya, flying through London of Britain, Stanley Ann Obama was a British wife, carrying a British child within her with full benefits and legal rights and responsibilities forever upon her and Barack jr.

The following Articles and subsections of the Act are specific and supersede American law due to the fact of the Act speaks of colonies. America was a colony of the British and although she gained independence, she is still if her Citizens marry a British subject mandated by British Law has no longer an American citizen alone, but a citizen and subject by consent of that marriage contract.

No one has bothered to ascertain that in legal British Law, Barack Sr. and Stanley Ann Obama, are both British subjects by legal definition. Barack Obama was born to two British subjects in August of 1961, in literal law no matter where he was born in Hawaii nor affirmed deliberately in Canada nor Kenya.

Section 13 of the 1948 Act are quite thorough and posted here with comment to reveal that this Act reaches to even non citizens, as once you drank British tea, you were British.

1. The law in force before the commencement of this Act relating to British nationality shall continue to apply to a person while he remains a British subject without citizenship by virtue of section thirteen of this Act as if this Act had not been passed:

(a) if that person is a male, nothing in this paragraph shall confer British nationality on any woman whom he marries during the period that he is a British subject without citizenship, or on any child born to him during that period;

(b) he shall not, by becoming naturalised in a foreign state, be deemed to have ceased to be a British subject by virtue of section thirteen of the British Nationality and Status of Aliens Act, 1914;

Section 13 shows in part A that a non subject can not transfer citizenship, but Barack Sr. was a citizen, so therefore his entire power within the Empire was transferred upon Barack Jr. and his wife.
Part B, is the all inclusive forever and ever British mandate in even if a subject becomes a citizen of another nation, they are still British. Hence, Birdie Obama, no matter what he states on his website, he was born under 1948 mandate and is a British subject no matter if he was registered Hawaiian, Indonesian or the king of cheese of the moon. British Law defines him forever as a British subject who is regulated by the Laws of Great Britain.
Part C explains Stanley Ann upon being married to a British subject, no matter if she married an Indonesian after divorcing the British Obama, is forever a British subject.

Do not miss in this the terms subject, they fully mean subject as in subject to the Queen, Parliament and all British Mandate forever and never a Citizen again.

In Part 2 of Section 16 there is revealed in the Act the one thing Barack Obama should be required to produce before Congress and the United States Supreme Court and that is what should be the issue of all these lawsuits.

Stanley Ann Obama as a minor, upon marrying Barack Hussein Obama Sr. of Kenya, a British subject, was British. She confirmed this by entering Canada and by going to Kenya on the testimony of British subject which is legal recorded confirmation by Birdie's African Grandmother.
According to Part 2, Section 16, Part A, Stanley Ann Obama was required to declare she was an alien. Until any written or recorded information in her own hand or voice states plainly, "I renounce citizenship in the British Commonwealth", Stanley Ann Obama IS a British subject under legal definition as a dual citizen and subject, exactly as her son, Birdie, and he is disqualified from being President, exactly as Stanley Ann would be under dual citizenship if she attempted to be elected to the Presidency.

None of this can be more legally clear. I have informed the people driving these cases they are backwards in thought and process. I will not reveal the correct lawsuit to file concerning Barack Obama, but I will state here that a lawsuit filed on another Obama, Stanley Ann Obama, demanding records of her renunciation of British subject and citizenship be produced, along with her entire passport manifest would be thee opening link to prove Barack Obama jr. is the offspring of two British subjects, and, according to perpetual British law affirmed by the Obama's, he is to this day a British subject as he is of dual citizenship which disqualifies him and has on his site stated his British citizenship expired. There is according to the Law he was born under in the British Nationality Act of 1948, never an expiration on British citizenship.

British Nationality Act of 1965
Posted by Lame Cherry at 7:11 PM