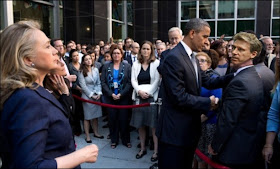 There is a reality in Chris Stevens which no one but this blog is going to address and that is what part did the Obama gay agenda have in his murder in sexual connections and political payback inside this regime?

It was absolutely no secret that Chris Stevens was gay. Thee entire diplomatic corp of the world knew he was a sodomite and those who  would speak about it, were perplexed as to why Obama stationed an openly gay male inside Muslim nations where the very acts were a death sentence.

Chris Stevens has a meteoric rise in the diplomatic corp starting with the Bush people. His premier station from the start was Israel and in the heat of situations, it was him that ended up in Libya.

When this blog stated it was Obama hired mercenaries who oversaw the mass murder of the Khadaffi group, that is exactly what took place last year. This was not an act of natural selection but select assassination carried out by the Obama regime in a mass murder. This was not the natural law of nature, but the nature of the outlaw of Mr. Obama.

That is what Chris Stevens walked into with three other Americans. They were told that this was a negotiation for weapons to keep the Obama regime from being embarrassed and implicated in handing sophisticated weapons into  terrorists hands, which were starting to be negotiated with assassinate competitors around the globe.
It is why this blog first reported that CIA Director David Patraeus lied to Congress about the smart mortar which murdered two people at the US Embassy ending the rampage there at 4 AM, because this is what this entire cast in trying to steal Libyan oil and hand Libya over to the Muslim Brohood had been engaged in, the literal arming of terrorists in Libya.

It connects into Turkeygate, which was exposed here first in Obama has been running money and arms covertly through Islamic Turkey into Egypt and now having given Stinger missiles to terrorists in Syria.

The Obama regime has been nothing but a conduit of drug trade, weapons, money and land to terrorists in quid pro quo for four years.

Chris Stevens was supposed to be taken hostage by the "negotiators", who Mr. Obama was going to blame on the Khadaffi loyalists who have been negotiated with by the Libyan government.
The SEALS were never to survive in being the rift between Christian America in the release of the Obama covert produced tape about Islam to intimidate Christians from voting for Romney. This was the rift Obama sought to create and exploit for the election theft in 2012.

Stevens with the video cameras which were provided along with the chanting Muslim teenagers protesting this movie in ENGLISH, were to be the feeds to cable news setting the stage for all of this.
You missed that did you not children in these terrorists had these cameras to record all of this for the world to see, all from the Obama campaign.

B. Hussein honestly thought the operation was successful at first, but then he was afforded through his Muslim back channel, that if Mr. Obama attempted to intervene, his entire hostage taking campaign along with the weapons he had supplied terrorists would be put on display.
That is why the terrorists blew the Embassy apart with that precision guided mortar, as it was given to them by Obama.

It was the smoking mortar, and all B. Hussein could do was continue on his campaign talking points as that is all he had to cover up with.

Anderson Cooper by his reaction at CNN points to he knew Chris Stevens was gay and probably was once a sexual associate. Cooper in his teabagger lines smearing the Tea Party with Barack Hussein Obama using that exact word, means the talking point was bandied about among the Obama fag corp as their personal joke.

Anderson Cooper outing Obama on CNN over the murder of Chris Stevens, means these bath house boys were bitch towel slapping each other.

The question in this with lesbian Hillary Clinton with Huma Wiener, wife of sexual pervert Anthony Wiener, was the Chicago gay bath house which secured Rahm Emanuel his position in Washington, DC, transferred to 1600 Penn Avenue, in the advent of the Charlie Gibson of ABC news open shirt soap dropper interview with Barack Hussein Obama, the rolling over in bed with NBC anchor Brian Williams, and that just as John Kennedy had dope and sex parties at the White House, is that what Barack Hussein Obama was engaging in with body man Reggie Love while flossing his teeth, in the mutual sexual partner of Anderson Cooper of CNN and Barack Hussein Obama, was Chris Stevens, and it was the catalyst for his meteoric rise to power.

Was one of the reasons Barack Hussein Obama was covering up what took place with Chris Stevens in Benghazi, was the same cover up with Donald Young and Lawrence Sinclair in Chicago, in Barack Obama was hiding a more intimate detail in Chris Stevens performed a Monica Lewinski on him in the Oval Office?

Why is it in the reason Chris Stevens was in Libya on that staged night, that not one connection has been made in his visiting the White House, DOD, CIA headquarters in briefings on getting those weapons back Mr. Obama supplied his Libyan terrrorists?
For those who do not know of such ventures, no Ambassador is going to not be briefed and coordinated directly with out of 1600 Penn Avenue, when it is a White House operation overthowing Khadaffi and it involves illegal arms transfers to terrorists, and the mission is how to cover up that crime.

Chris Stevens met with more than Hillary Clinton on this, as he would need to know exact weaponry to be inquired about, and he would need a direct affirmation from the Oval Office, because if he was ever outed or caught working deals to acquire weapons from terrorists on his own, he would be indicted as this arms trade just like Iran Contra would blow back directly to those who started it at the White House.

Leon Panetta, Hillary Clinton, Joe Biden, David Patraeus or Chris Stevens can not hand out weapons to terrorists. That comes from one person and that person is Barack Hussein Obama, as he has been doing for years.

That is the reality in this, and the question asked exclusively now in this Lame Cherry blog in matter and anti matter is...........

That is the question which must not be asked alone, but answers demanded of it.

How much of ANALGATE started bent over in the White House in the mixing of the fluids of state and the feces of press?