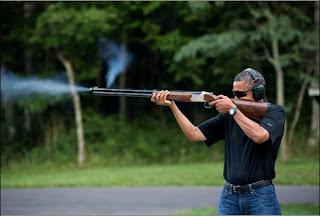 My children, as another Lame Cherry exclusive in matter anti matter, concerning the photo of Barack Hussein Obama AKA Skeeter Obama AKA Barry Chin which you will not receive any other place, anywhere, as all of your experts from Limbaugh, Hannity, Levin, Ingraham, Savage, Dean blah blah blah Ed Schultz are not going to inform you of the reality of the fraud of Barack Obama.

Even if gunner Schultz does know how to massacre cranes.

First off, we have beloved leader, B. Hussein hosing down only Obama knows what, as one points a shotgun, in the air and not straight ahead when shooting skeet.

Fake picture of Obama just attempting to appear he has ever had a weapon in his hand, besides the one which riddled Donald Young's gay body before it became a corpse in Chicago prior to Christmas 2007.

Obama is shooting an over and under. There are tell tale signatures in this that Obama has no idea what he is doing and does not fire guns. If he had simply taken me up on my offer to go hunting and have Muchelle pluck our white fronts and roast them up, as she rubbed, Dick Cheney's and my feet, all of this could have been avoided in B. Hussein looking like a more complete fool than he usually positions hisself as.

The recoil pad on the stock of this shotgun is in the wrong place. Obama should have it down seated on his shoulder. Neophytes have this problem when guns do not fit them. It makes them kiss your shoulder harder and leaves red spots as it is the pointy part of the stock hitting your shoulder.

Next Obama's cheek is in the wrong spot.......no not the Mom jean's ass cheeks, but his face cheek. Obama has it scrunched up as he is terrified of the recoil and bang of this gun. His nose should be "kissing" his thumb for a better site alinement and Obama is stiffly holding this firearm and "not into it", because he is a virgin.

His right hand is in the wrong place in extending beyond the forearm. There are cardinal rules in this, to keeping your oily salty damn hands off the bluing of the barrel, as hunters and shooters like their guns pretty.
The same holds true for not wrapping your stubby fingers up onto the barrel to distract YOUR SHOOTING as you must sight down this barrel at the front bead in order to hit the target you are aiming at.

Obama in the way he is Mom jean's handling this shotgun, could not adjust comfortablly to swing on the target nor elevate.

I will provide a hint too as the photo depicts and overcast day, and Obama with those Fearless Fly safety glasses he is wearing would be encumbered by black clay pigeons being lost in a dreary sky, but as he is not shooting at anything but thin air for a photo op, it does not matter. Unless of course, one is interested in the Truth as an expert in firearms and methods would be.

Why is it that you will hear none of this from the NRA, Nugent, Limbaugh, Schultz etc....

Yeah ponder that as it is important in why this only comes from one source being here, EVERY TIME.

Next, Obama is shooting a fag shotgun. Notice that plume of smokeless powder coming out of the end, and bursting out of the side?

Obama is firing an elongated choke tube, which has inserts of various "chokes" meant to constrict the shot pattern.......meaning tight patterns for longer shots, and modified or open patterns for close shots or for shooters who could not hit a bull or Boehner in the ass with a scoop shovel.

The sissy part of Obama is the powder gas escaping out the side ports. This is a muzzle break. Doing this reduces recoil for woosies who can not handle recoil, usually in the rifled magnums.

Obama is firing a 12 gauge, skeet or trap gun, for clay targets. This is thee lightest load in ammunition. Unless one was an Olympic shooter firing off a thousand rounds in practice, one would not even bother with anything being ported, as these light loads are in the 1 ounce category, loaded fast with a light load of powder, so one does not even notice their going off.

Completely different than lead 12 gauge 3 inch with 2 ounces of BB's. Those and my pet 10 gauge get your attention. A friend of my beloved Uncle's had a double barrel 10 gauge Ithaca, which fires a 3 1/2 inch shell, or the equivalent 8 gauge of yesteryear. Damn thing would fire both barrels off at once, which was like cutting loose with a double barrel elephant gun.
He was a big man, and it still knocked him on his ass when he was goose hunting.
He though did not have a muzzle break.

Some folks like myself find recoil comforting in the gun letting you know it is there. Nice hearing a metal barrel sing too in a heavy load.

Oh yes, Obama is a puss who shoots a woosie shotgun loaded with light loads. The photo reveals that Obama is shooting such a light load that it did not even push him out of his stance. It honestly looks like Val-erie Jarrett had the Secret Service open up some AA trap loads, dump out the 8 shot, and then crimp it back in as nothing appears to be coming out of that barrel.


Get the point yet, in there is no WAD in this photo in the wad is something that the shot is placed into to hold it into a better pattern.
In a still action photo as the above, the wad should be visible just at the head of this plume of powder smoke.......which too is smoking a bit too much for nitrocellulose powder and is suspect in Obama had someone load some next generation black powder replacement like Shockey's citrus based powder......as this is what my muzzle loader looks like when I burn powder in it.

Now you see, all of this information is a bit more information than the Obama propaganda machine wants out, and Mockingbird Wayne LaPierre of the NRA or any of these right or left wing sorts are not going to be revealing these realities that the popular girl is exposing all of this in.........

this is Obama's missing wad

Yes perhaps B. Hussein should have not threatened Matt Drudge with making bad quality photoshops of Obama, as Mr. Chin after gaining so much from this blog has a discerning taste in appreciating the quality work here, compared to the low quality Drudge work.

This blog does appreciate the hat tip from B. Hussein in his attempt to get Matt Drudge to employ me for a 6 figure salary as was offered here months ago, but B. Hussein should realize that sometimes a photoshop photo would have been the distraction he needed, instead of the thousand words posted here, exposing more of his fraud from ANALGATE to now WADGATE.

Who did destroy Camelot after Uncle Ted put the crown on his head.