What else would you expect from the Obama's in a tacky secular Muslim card for Christmas? 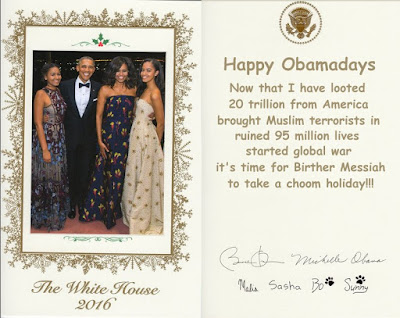 Apparently this card was produced when that commie PM from Canada was in town in the spring. As you can tell the Obama's could not give a damn about Christ's Birthday. I will assume like Hillary Clinton, that the Obama's are too busy looting the White House to waste time on White House etiquette for Christmas.

Below is the 1986 Reagan White House Christmas Card. This is the 1973 Nixon White House Christmas Card.

Obviously one has to be an American to appreciate Presidency and Christmas at 1600 Pennsylvania Avenue.