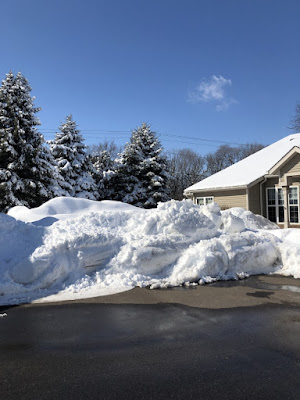 
So the Viking sent me some photos of Minnesota HAARP and I am jealous, as what the heck is it with Minnesota in even their snow is pretty and is clean.

Seriously, when we went to town here yesterday, the snow looked like a Mexican's ass, in it was dirty, didn't know what was in it, and there it was on the curb.
I mean even dying in Minnesota must be pleasant thing, as you got snow scooped of dirty parking lots, and the snow is cleaner than the North Pole. Everything looks like Hansel and Gretal at the Witch's House with icing instead of snow on the eves.

I got this photo today of the super storm......and poof HAARP is gone. The biggest damn storm in 40 years and in one night it just disappears.

You remember the photos of our  crapper Brier Patch snow, and then there is  the Baby Girl's artwork of Minnesota. The snow is pretty. To give you an idea of my show this morning. I said to TL, "Oh it isn't snowing", and when  I went out, I had ice daggers piercing my face just that quick. HAARP apparently froze daggers in the sky which was cold. We have a windstorm here for entertainment, but it feels warm outside, so that was pleasant, as you just sort of hide behind things to not be crucified by ice and enjoy the feeling it is warm.

I just can not believe the moisture all disappeared after I posted last night. The US looks  like a drought land, but it is a point of how HAARP disappears the moisture, as it is definitely gone.

I don't have any hot photos of Sioux Falls chics though. No time to look, and they have not sent me any photos of themselves in leg oriented skirts, as I would naturally publish them and make them stars.

The Viking goes bionic with surgery in a few days, so will be praying for that. He will get a 6 week rest which is welcome and he can restore things. The way it looks, it will be 60's for his recoup in Minnesota, and that will be nice as I assume the robins, swallows and cardinals will be about, and nothing makes you feel nicer  than cardinals and robins. I am still waiting for any geese to appear here again, as that is the sure sign that early spring is here.

I see why Zeb Pike when he was at St. Tony's Falls which is the modern Twin Cities, why elk were there in herds of 300 and he was chasing them around and they would not go into the trees. I got a thrift store frame yesterday and glass for my elk print we got last year. It was a huge frame...........then I measured the print for it, and the print is bigger than the frame. That means I have to build when the finances are secure a frame for this elk print. I really like it, as it reminds me of the old Outdoor Life artwork on their magazines back in the 1960's when it was a hunting magazine. That is the mother of all elk prints and we have to do it as I do not have 200 bucks to frame and mat it.


The Viking says the Gov of Minnesota wants to do away with Daylight Savings Time. He says it is confusing or disturbing. I say that must mean the Somali terrorists there are having troubles comprehending SPRING AHEAD AND FALL BACK. I can see the problem in coordinating a rape of some Muslim who won't wear the veil and they say, "Be here at 7" and one guy shows up, starts the rape, and the cops show up, arrest him, and an hour later the other Somali's show up and the cops are all around the place, so there is no gang rape tonight, just more poking it into the Walmart burgers at 3 dollar pound.


Well enough of this pretty snow, or else I might start enjoying it. Snow should hurt like our snow does, in  when you look at it, it blinds you, when the wind blows it, it cuts you, and when it is on the ground and you fall it feels like concrete and bruises you.