The Mueller Has Left The Building 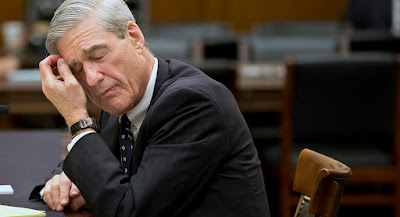 This crooked, power abusive and protector of America, looked not just tired, but scared. I suspect the warning from the Barr Department of Justice to not engage in a Comey lynching of Donald Trump, resonated in the old man, who saw visions of being Paul Manafort's bunk mate as the DOJ prosecuted Mueller.

What Mueller presented was a person who seems to have been a pawn of the rabid team which destroyed so many lives, because Mueller either acted or had no idea what his report even had in it.

The Robert Mueller hearings continue to grind on, and perhaps especially on Mueller himself. At times, Mueller acts as nothing more than a one-word validation for Democrats reading verbatim from his report. At other times, he appears lost and unfamiliar with it — especially in this tough cross-examination from Republican Jim Jordan. Jordan highlights the curious case of Joseph Mifsud in the Russia-collusion saga, whose name comes up 87 times in Mueller’s report, included repeated references to his lying to investigators.


Republicans engaged in the correct line of questioning in why a few people were framed, but the real criminals working for the deep state were not indicted. Democrats seemed to want to beat some life into Robert Mueller, to get him to sign over his personal possessions, as Robert Mueller of today was not the Robert Mueller who closed down this investigation.
I would have asked the question in when Robert Mueller knew there was not any Russian collusions (which was day one)  and then demanded to know why innocent people were framed in FBI questioning for not remembering anything.........and why James Comey was not indicted as the slimiest abuser of classified information since Hillary Clinton.
The Robert Mueller of today was an embarrassment to the Department of Justice and the American legal  system.   Robert Mueller honestly looked  like the grandparent who sits in their recliner all day, with their mouth open, staring off into space while peeing on themselves as they thought they went to the toilet.

This Robert Mueller was an unmitigated disaster for democrats.

The one highlight that I did see was then Congress took a break so Robert Mueller could go change his Depends. There was high drama in that one as Brett Baier at FOX had the weirdest body  language of leaning his shoulders into the female anchor as his penis was phobic of expressing pelvis contact.
Mueller did not change suit, so it appears that when one pisses their pants in fear of going to pound your ass prison or being senile in not having bladder function, Depends protects your boxers and your expensive suits. 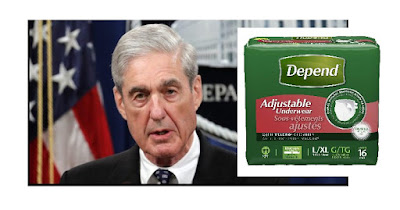 Robert Mueller has ruined numerous lives in his career of bastardizing the FBI in his own image to the innocent people in Russiagate. The nation has been wronged by him, but there is nothing left in Robert Mueller worth a pound of flesh in the courts. Justice will have to come from a higher court before Christ for him to answer for his abuses of power. In that, compassion moves one to hope that Robert Mueller just fades away, and we can forget his embarrassing performance, his last appearance before the American People when he acted senile, incapable, worn out and on the verge of collapse. Robert Mueller has left the building and democrats should show some compassion and just let this old man fade from all of our memories. In that, James Comey could do his mentor the best favor of all in shutting up, and ceasing his  braying attacks upon President Donald Trump, for Comey plays the part of the undignified brat soiling the memory  of Robert Mueller, even if it was fiction, he at least looked stoic in a suit with the prestige of the FBI behind him.

Robert Mueller needs to be left to his Depends, morning oatmeal and some appropriate geezer television to numb his mind, like fixing up houses or restoring autos, so that he arrives where he is going in not remembering himself any more, because what appeared today before Congress is a person who is best forgotten and can deal with something in his pay grade after all the damage he has done, in contemplating his supply of Depends diapers. 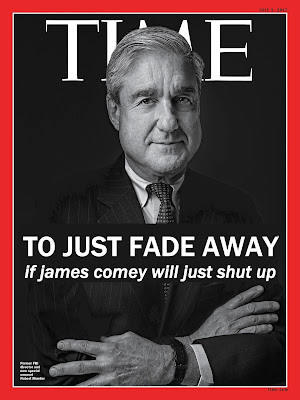