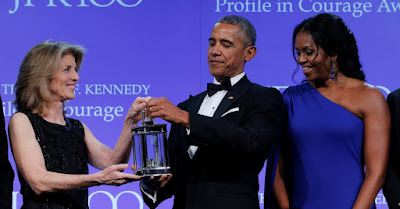 There has been a pressing question in the framing of Donald Trump for the Mueller Witch Hunt, which no one has been able to answer, and that is why did the image of Barack Hussein Obama unleash his Bush appointed thugs (James Clapper served George W. Bush) into leaking information to the press, while another Bush appointee, James Comey, was to brief Donald Trump that an MI6 file which was the Pissgate Dossier, stated that Donald Trump hired 14 year old Russian whores to piss in the bed that Barack and Michelle Obama slept in.

Everyone knew these charges were not just unproven, but they were absolutely false.


We are three years into the biggest political scandal in American history and former President Barack Obama has yet to be asked about his role in orchestrating the international subterfuge that Donald Trump’s campaign colluded with the Kremlin to rig the 2016 presidential election.
Not one journalist has posed a single question to Obama about what officials in his White House knew—or when they knew it—despite multiple ongoing investigations by the Justice Department and on Capitol Hill. The more than decade-long media swoon for the 44th president continues unabated.

But Attorney General William Barr might do the work that the news media refuses to do.
In an interview with Fox News host Bill Hemmer on Friday, Barr indicated his office is looking into “some very strange developments” that occurred between the election and Inauguration Day.


There is more to this than Mike Rogers being a ring leader in this frame up of Donald Trump, than just humiliating Donald Trump, and it goes to more than even what Obama's press secretary was attempting to steer this as, a linking of Donald Trump speaking out about Obama being a Birther.
Yes Obama is thin skinned enough to seek revenge on Trump in a Pissgate leak, because Obama was the most deluded grandeur psycho who ever was in the White House, as he swayed between being a messiah, then Ronald Reagan, and tried to have Ambassador Christopher Stevens kidnapped by Obama's own terrorists in Benghazi, so Obama could be a hero, send in the SEALS to rescue Stevens and kill Obama's terrorists.
No that did not work out as the terrorists figured out what was taking place and anal raped Stevens to death to deny Obama, but it is the reality of what a f*cked up brain inhabited the cranium of Birther Hussein Obama.

Obama’s press secretary, Josh Earnest, might have revealed the reason in a press briefing the day after the CNN story aired and BuzzFeed posted the dossier in full.
“The president-elect and his team are suggesting that the accusations that are being made are totally unfounded, that there’s no basis for them,” Earnest told the White House press corps on January 11, 2017. “This president has been in a situation in which he has been criticized in an utterly false, baseless way. And I’m, of course, referring to the president’s birthplace. There were a wide variety of the president’s critics who were suggesting and propagating conspiracy theories that somehow the president wasn’t born in the United States.”


No what Obama's plan appears to have been up to, is the same G. Gordon Liddy with E. Howard Hunt operation to connect innocent Richard Nixon to the Watergate plumbers. Nixon was never stupid enough to sanction a break in at the DNC, which is what took place with Seth Rich at the DNC in 2016 in copying files for Wikileaks, another blast from the past, so those employed by the same John Brennan CIA deep state, ran an operation where  burglars would be caught and this would carry directly into the White House.

What Obama was engaged in, was sending Comey over to Donald Trump to get Donald Trump into a natural reaction of trying to find out what he was being framed for, and this would be Donald Trump in the role of Richard Nixon in being a part of a cover up.
Donald Trump never took the bait that Obama had laid out, but this is the grand scheme of Obama, and why you kept hearing about OBSTRUCTION OF JUSTICE, because that is what Trump was being set up for.

It is why you keep hearing that stooge democrat Nadler, saying Trump broke the law. Trump broke no such laws, as this is the second phase of the framing of Donald Trump.

What Attorney General Barr needs to do, is haul the image of Barack Hussein Obama in before the FBI for questioning, along with taking his DNA for verification of this is who Obama is, and then start grilling him, as his notes are compared to Susan Rice, Peter Strzok, James Comey, John Brennan, Michelle Obama, Val-erie Jarrett, and in that, the reality of the image of Obama will begin to appear.

Let us have a DNA sample to understand why Barack Hussein Obama began looking different after June 13th, 2013, he started acting different and he lost all of his political clout and nothing went right for Obama after that date.

Let William Barr ask Birther Husein about his White House Plumbers, but first let us ascertain if this is really Barack Hussein Obama, or a stand in who has been featured as him for the past 6 years.

Let us really get to the bottom of what the framing of Donald Trump was entirely about, in why Obama was fixated at all costs of high crimes, to cover up something so damaging in his regime, that he would commit felonies and do everything he could to protect his legacy, in hiding what that secret really was and still is. 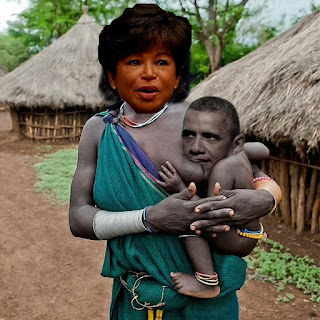