Trump Rehires Someone Who Hates Americans 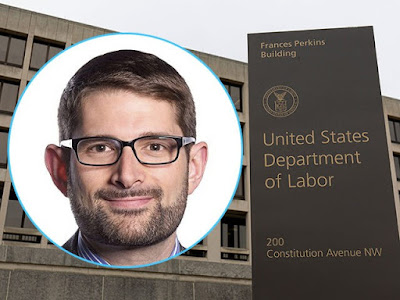 I will be the first to admit that what is deemed "comedy" is something I never laugh at. The Three Stooges beating on each other is not funny to me. Chevy Chase is stupid, mean and dull as are all of these comedians.
That is why when I read from Examiner that a fired and then rehired US Department of Labor posted a hilarious joke, which a Ben Penn at Bloomberg took out of context and smeared one Lief Olson of Texas, this is not funny any more than some 1950's knock knock jokes. 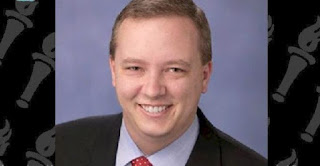 Here is the first thing that Olson wrote in 2016:

Establishment RINO corporate tool Paul Ryan was finally brought to heel in tonight’s primary election by an uprising of the conservative masses in Real America eager for an authentic voice in Washington instead of the same tired globalist open-borders pap they’ve been pushing on us since the Elites abandoned the People.

The guy just suffered a massive, historic, emasculating 70-point victory. Let’s see him and his Georgetown cocktail-party puppetmasters try to walk that one off.


While Ben Penn was focusing on anti semitic things Lief Olson was posting for fun:

“No he’s not. Neo-cons are all Upper East Side Zionists who don’t golf on Sunday, if you know what I mean.”
“That’s what I meant. He’s a Jew. Everyone knows that,” the social media user said.
Olson responded once more, “It must be true because I’ve never seen the Lamestream Media report it, and you know they protect their own.” 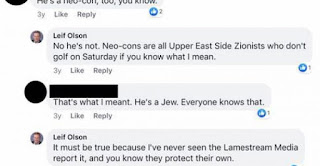 I read this as another hatred of White America, which has been condoned for far too long. There are numbers of voters who have a real political problem with open borders, which is negating Emancipation and making a slave class in Americans, which is bringing a financial genocide on White Americans, who are having their jobs taken, and this poorer class is consuming the used cars, Goodwill and starter homes from Americans.

While Ben Penn does not focus on it, nor Leif Olson does not think it is funny, the Black's in America are being moved out of a number of jobs by all of these foreigners.
Those are legitimate political interests in the streets of Chicago where Blacks and Mexicans are being shot, as the Obama regime began allowing in MS 13 out of Latin America to manage the drug trade. America is in a murderous decades long dope war, where every street corner is worth several million dollars, and it is being laundered into Wall Street, which just happens to be Goldman Sachs laundering this money and it just happens to be Gary Cohen who wrote the tax bill, keeping Obama super taxes in place impoverishing Americans to this day.

Leif Olson can mock those voters whose lives are being ruined and Ben Penn  can focus on  the anti semitic smears, but the reality is, I don't give a damn if it is Jews who are on the financial end, as I would be making a note if it was Nigerians, Russians or Chinese. In fact, this blog broke the story that British MI6 was behind the Trump Pissgate coup.
None of this helps in dealing with issues harming all of America, with over 100 million out of jobs yet, as Americans are being sold our natural gas and oil, as every last facet of an American's life is managed to the last cent exploited from them.

Mocking Paul Nehlen who actually addressed the concerns of 30% of the voters in Wisconsin, a cheese state that is overrun with foreign slave labor, is reprehensible of Leif Olson. These are real people with real hardships and Leif Olson is  mocking their concerns and discounting their lives as not worth having a political voice.
If one RINO that Lou Dobbs was just lecturing Mitt Romney's kindred who heads the RNC was actually speaking to the issues which Americans  face, then a Paul Nehlen would never be paid attention to. Since that child molester who ran the House for the Republicans lied to Americans 30 years ago, Americans have been marginalized by  the Leif Olson insiders, who run for office in Texas, but by miracle come to life in Washington DC as federal attorneys, and when they get fired, they get rehired as people on the right and left both come to his aid to get that job back.
I don't see any kind of that action for a farmer being bankrupted by corporate agriculture or the roofer in the metro replaced by Mexican slave labor.

Leif Olson is not an anti semite, no more than he has any taste in humor or talent. Leif Olson though is an employee of Americans, taking American's money at the Department of Labor which is supposed to be speaking for working and non working American Citizens, and he just got rehired for treating 30% of the voters like shit. Shit that is deemed racist. Shit that is flushable, because when they lose their jobs, they don't end up in Washington DC with big retirement packages as no one gives a damn about them.

For that reason, Leif Olson should not have been fired, but HE SHOULD NEVER HAVE BEEN HIRED, as he is not an advocate for all Americans. That is the issue which is not being addressed in more of this anti Jewry diversion.

70% of Americans believe, through experience that the system is only for the Leif Olson types, and sure as the sun rose, they were proven right again. I have never once after losing something, found my way to a five figure or six figure job. I have done what is right. I have lived Christian virtue. I have spoken out against the repression of anyone who has been made politically expendable by those in power  and I receive no rewards.
I question how troubling Mark Zuckerberg is in his psychology and the dangers of Facebook and I get banned. Google censors my work and suppresses traffic. The paid elite have stolen my work and produced no contributions. The people who I give voice to here in satire, humor,  investigative journalism and not allowing them to be silenced by thought police by using words that we are told we can not, are experiencing real repression and hardship. They have little money and things are getting worse for them.
Jeb Bush told them they were lazy and to get a second job. Ben Shapiro, a Jew, oh no I should not have noted he was  Jewish as we are not supposed to ever mention things like that in a free society, blamed Americans with hardships as it as their own fault.

I know that Bush, Shapiro, and Ben Penn do not speak for me or the people who read here, and Leif Olson certainly can not be trusted to represent my or my reader's interest as he laughed at 30% of the votes and mocked them in defeat. The people without jobs on election night were being mocked by the guy who got a high paying job who is supposed to be representing them.

That though does not register with a Ben Penn, as he has the same bias which Leif Olson does for a large percentage of Americans. That bias is as certain to create a holocaust in America without fences, as when a group of people are being repressed politically, financially and spiritually for another group, they will eventually die out.

That is what is taking place in America behind all the White Nationalist and White Privilege rhetoric, as real people whether they are on the streets of Chicago in being Black, real Latins with Brown skins enslaved or Yellow skinned peoples exploited in Chicom money laundering into Wall Street Jewish finance, are all being consumed.

It's ok as Ben Penn has a high paying job and is not paid to write about as he is ok with it, just like Leif Olson thinks it is a joke.

https://100percentfedup.com/mostly-black-americans-apply-for-jobs-at-koch-foods-after-ice-raids-remove-hundreds-of-illegal-aliens/
Black Americans showed up to a job fair in Mississippi, hoping to fill some of the positions following the raids. President Trump and many leaders in the Republican Party have been saying it for years—The people who are hurt most by the Democrat Party's insistence on bringing massive numbers of illegal aliens into the United States, are black Americans.


Oh and as the Ben Penn media was creating propaganda in the above, that there were not enough people for the jobs at the chicken butchering plant after ICE raids, here is the reality of Forest Mississippi. It is an elderly community. This Chicago company deliberately placed this facility into a rural town with 6000 people where it was half white and black. Koch then imported Mexicans for the jobs and hid them there for mass profits.
There simply was not the demographic for almost a 1000 workers for this plant.


But lets just fight about Jews and laugh about American voters being disenfranchised.