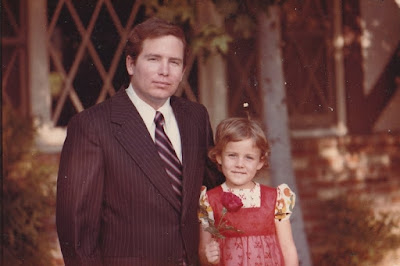 I found the story of Stephanie Hofeller on NPR, and instead of being a liberal celebrating a daughter savaging her dead father's corpse, I see the horror of an adult woman, joining with liberals to get their last revenge in on a dead body, by destroying her Republican father.

The daughter had been estranged from her father for four years, was in Kentucky, when her family had not even informed her that her dad was dead. Upon learning that a year ago, she swept into North Carolina where her aging mother was, and as a liberal apparently seized (what she said her mother told her she could take) a number of computer drives, which again the Republicans had paid for.

It had been more than four years since Stephanie had spoken to her father after a family dispute involving the custody of her children landed in court. But on the last day of September in 2018, she "had a hunch that maybe something was wrong," according to her testimony for a lawsuit deposition.

Sitting in her car parked outside a convenience store in Kentucky, she used her phone to search online for her father's name and found an obituary for Thomas Hofeller, confirming that he had died at the age of 75 more than a month earlier in August.
Stephanie then reconnected with her mother, Kathleen, and visited her parents' apartment in North Carolina, where she found four external hard drives and a clear plastic bag containing 18 USB thumb drives in her father's room.


As no one was that interested in this cache, or more to the point, it was not doing the damage the daughter intended, she set up a website to produce all of these Republican owned documents on how strategists discover which questions favor one political party over another.

Of course this is wickedness when it is Republicans, but is not worth investigating when democrats are engaged in the same legal activities. It all comes down to the fact of how injured this daughter is, that in the worst kind of psychosis she is lashing out at a dead parent, and democrats are assisting like Cindy Sheehan in her loss, and when it is all over, this Stephanie is going to be discarded by democrats, viewed as horrid by Republicans for what she engaged in, and she is going to have the added burden of having to deal with how heinous she was to the memory of her father. She literally is catharsis is attempting to destroy the GOP in North Carolina and making her father's reputation which is her reputation a family feud.

They have been cited as evidence of gerrymandering that got political maps thrown out in North Carolina, and they have raised questions about Hofeller's role in the Trump administration's failed push for a census citizenship question.
Now more of the files are available online through a website called The Hofeller Files, where Hofeller's daughter, Stephanie Hofeller, published a link to her copy of the files on Sunday after first announcing her plans in a tweet last month.
"These are matters that concern the people and their franchise and their access to resources. This is, therefore, the property of the people," Hofeller told NPR. "I won't be satisfied that we the people have found everything until we the people have had a look at it in its entirety."


This woman was going after her father's partner "as he got all the good stuff". She has deluded herself that she will be satisfied at looking at everything, but nothing is going to fill that hole she is drilling down deeper to a bottomless pit. She has set a standard which is unachievable and will gnash herself in self inflicted wounds, and when it is all over, she will be even more empty than she is now.

I would hope this woman would take up the Gospel of St. John, and read it, and keep reading it daily, as she talks to Jesus, but she will do nothing but blame others for what she has done. If she would stay with it long enough, perhaps by associating with the Love of God, she would find the step to heal as this scorched earth she is engaged in, is not the answer.

My parents were horrid to me as I have shared here to help others to heal. Tearing holes in myself was never the answer as there were enough holes torn there already. For me, my healing is not having to deal with them any more and moving on with building a life in the Lord.  I would that Stephanie Hofeller would go back to her being a little girl and just ask herself, "Would that little girl be the kind of person who is known for being a ghoul in taking revenge on her father's corpse to make him pay, when all it is doing is inflicting more damage on that adult woman?"
I would hope that would resonate in her in revealing how wrong things have gone from what she hoped.

She can not rebuild a relationship with her dad. That is done. She can not harm her dad, as that is done. All she can do is make a choice of either in God building a life or tearing what is left of her life apart........and to fully comprehend that in time, she is going to regret this, be ashamed of what she acted out in, and is going to have to face all of this in she is the one who is going to have to find the way to not forgive her father, but herself.

I can understand this woman, but what I can not understand is NPR and these liberals being so horrid that not one of them is trying to tell this woman that what she is doing is not a good idea for her.

God help that woman as liberals certainly are not.