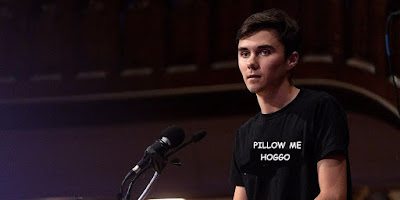 “After many discussions with William and my friends, family and mentors, I made the good faith decision to allow William to bring our vision to life without me,” he continued. “That vision remains an ethical company that produces products that people need while creating good union paying jobs and supporting social causes at the same time.”

David Hogg woke up that it takes works to run a company, instead of just spouting off online. Translation, Michael Bloomberg and other billionaire leftists refused to stick their money into this stupid idea, as the Lame Cherry pointed out, there are SEVERAL COMPANIES already using cut throat pricing in the pillow market and there is not any margin for profit in this, in their using foreign slave labor.

As this blog pointed out, the budget for a pillow company like Hogg and LeGate were primed for, would be around 750,000 dollars at a minimum just to bare bones start up. LeGate does not have that kind of money as he is not rich, just a few million rich, and that money would be invested and he would have to liquidate and mortgage his home.

So the translation in this is, Hogg has stuck LeGate with this failure, and unless LeGate can sucker some billionaire to invest, or a Hedge Fund investment, you have seen the last of this William LeGate partnered with a little closet boy, who never intended to spend the 18 hours a day, the massive travel to appear in public to sell to the public in person, and as LeGate is a nobody, no one will show up if he tries to sell pillows.

This is what happens with woke meets reality.

The Lame Cherry appeals to Ron Pearlman, Alyssa Milano, Jimmy Carey, John Cryer, John Cusack, John Fogerty, Bette Midler, Cher, Bruce Campbell and the other wokesters to put their money where their mouth is, to help William LeGate to save what is left of his reputation to fund this pillow venture to bury Mike Lindell. Robert DeNiro has more money than sense. There is that Biden brain, Debra Messing, hell Hunter Biden was paid millions in bribes, they can fund this pillow venture. How about Jimmy Kimmel, they are all millionaires and can afford it.

Ok that is my appeal to help the woke movement as David Hogg is too weak to put in a day's work.