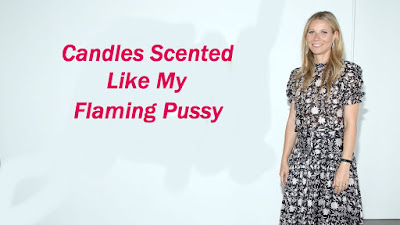 I admit for the Lame Cherry knowing all, that I can not understand two woke women of the left in Gwenyth Paltrow and Greta Thunberg.

Paltrow has a company for profit, which advocates not drinking coffee but injecting into your butt. She also sells a candle that smells like her vagina.

The products sold by Goop, established by Paltrow in 2008 and valued at $250m (£191m), include a candle titled "This Smells Like My Vagina".

OK my thought in this is, how does Paltrow know what her vagina smells like? Is she this limber? Does she deep finger her vagina, pull it out and sniff it? Does she have men, women and dogs sniff her vagina, and then critique candles in 'This one smells like your cunt Gwen:" to sort this all out and are the dogs trained to wag their tail or bark or it is like Pavlov's dog in when they pass things that smell like Paltrow's vagina a light goes on and they get a treat?

That is the mystery, but apparently two people have purchased vaginal scented candles, and both of them about burned their world down, as for some reason a candle which comes with warning instructions of being the towering inferno, actually goes off like Vesuvius in leaving burn marks.

I wonder what is the enticement to have a candle that smells like Gwenyth Patrrow's vagina. Does one masterbate to this in feeling closer to Paltrow in a Real Vaginal Experience or just what is the allure asa one would think that women would have been wearing pussy juice behind their ears instead of perfume to make men and lesbians helpless to their vixenology.

I'm not woke enough to understand this, but maybe Southern Poverty Law Center or the ADL could explain this.

I also am not understanding Greta Thunberg either as the Chinese have been smelling her fat and ridiculing her scent. It has something to do with Fukishima and Greta liking Japanese radioactive pollution, but  does not like Chinese pollution in the water. 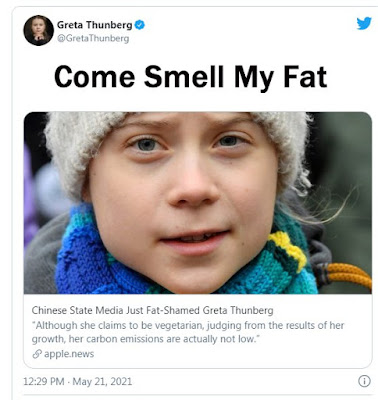 Greta was upset the Chinese were ridiculing her fat content.She was so upset that she even admitted she is in a wacko work world. Gwen though does not appear to be upset that her pussy scent is burning down houses. She is not even offering refunds. I do not know what kind of refund Greta would offer to Chinese put off by her fat smell.

What the Lame Cherry, as I try to become woke as a new sister to the movement, is for Gwen and Greta to join in wokeism to bring peace to the world. Gwen has candles and candles are made of tallow. Greta has fat but no candles. The Chinese have fat they do not like the smell of and GOOP clients have candles that burn like hell literally. If I get wokeism right as a new sister, I suggest that Greta go to China and get all her fat sucked out. Gwen sends her company to make Greta's fat into candles which of course have Paltrow's pussy scent included. The Chinese then will have candles that they like smelling, Great will not longer be fat. Gwen will have candles which will not burn houses down as we all know how lazy Greta is, and her fat will be lazy like her, in fact the white color will probably produce more light than the wick on fire.

This seems to be the best solution in making everyone happy. The profits of course could be donated to some fitting woke charity, like rescuing David Hogg and that strange little former business partner and make pillows which wokesters can have the kind of dreams they dream.

I will keep studying on this as I do want to pass my woke finals. I know we will not be graded and diplomas are handed out to all, but I do not think I will ever understand cunt candles and the Chinese racism in not liking Fatty Thunberg's fat scent.