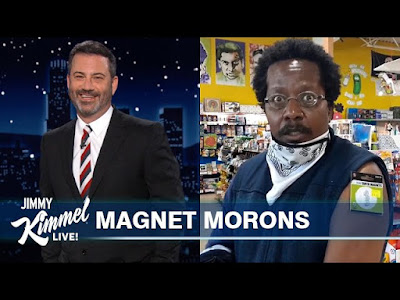 Whoever was behind the operation to smear the nurse who was testifying over Covid and could not make magnets stick to her arm when they had previously, made a colossal mistake as the CIA's Yahoo and Independent crowed about this failure, but as this Lame Cherry analyzed the evidence, the conclusion was that the magnetism is not in the body, the magnetism is not independent, but dependent, and the magnetism can be shut off or neutralized.

That is a huge revelation in this phased array process of Elon Musk, because it means without an EMP field, this magnetism is not active in those who have been vaxed or exposed to the Vax Lepers. If you remember Star Trek in "Spock if you can't tell me what it is, tell me what it isn't", this is vital information which was disclosed in a worthless stunt. This is the Rosetta Stone of information in a field of Rosetta Stones, and it was handed to the public and this blog exposed it exclusively in matter anti matter.

The reason this matters is the Mexican video below in their hosts making fun of objects sticking, and to these hosts shock..........objects stuck to people in silverware and cell phones.

Jeff Rense had on this explanatory link which exposes the process in this. What is taking place are SPIONS, or super magentized iron oxide particles can become magnetic when exposed to a magnetic field.

This is EXACTLY what the Lame Cherry projected was happening. The DNA structure in humans is being altered by the injection of these replicating nano particles, but when they come into contact with magnetic fields, they activate. That means 3G, 4G, 5G, 6G are tower fields. I would suspect that your fridge is a magnetic field which activates these particles when it is running, and the reason a cell phone sticks to a person's arm is because the cell phone is nothing but a super hot magnetic generating field of microwaves. The phones are not magnetic, the nano particles are not magnetic, but the radio waves are creating fields which activate the nano bits and this is what creates the magnetism.

Superparamagnetic iron oxide nanoparticles (SPIONs) are a type of MNP that show magnetic properties in the presence of an external magnetic field.

This video from Mexico below is damning. It stuns the hosts, and it proves the non vaxed and the Vax Lepers have different EMP generating fields in their bodies.

TL suggested a projection which is plausible in those who have had the biological weapon and recovered from it, as we were doused by our keepers in our home and other areas in contracting all the variants for our safety and displeasure, have a structure in us which makes us immune to not the COVID, and other strains, but this shedder prion will infect like an allergy, but it will not degrade to bloody wombs or squish brains. The inoculant is a blocker it seems and that is why all the vaxed are not going magnetic. This is not to say that there are not effects from other parts of this vax if a person is injected as we have witnessed those who had this virus, get injected and their personalities have changed. That synthetic prion is in these people's brains and it is having an effect.

Returning to the Ohio nurse who was smeared by the croc state, the proof of this is, is that even in cell tower Ohio, the DIA can shut down an area, whether they can do it the size of a person or it has to be a grid, is not known, but they can block and area. Whether someone around this woman had a neutralizing device or it can be accomplished from space or miles away is still unknown. What is known it did happen, and so therefore it is a reality, just as these magnetic generations in electric fields are genuine.

As stated this transhuman evolution of humans is multi part. There are the nano particles which link into Elon Musk's phased array. There is the prion which is the building block and there is the Morgellons which fiberforms the human into this synthetic immortal specie.

There is not a known way to stop the prion, even if it is said that the 1% would not have unleashed this virus if there was not a shut off switch. The difference is the vax prion is injected, it is not the virus and is a completely different means to an end.

The Mogellons is a completely different venue also as it replaces the human body and it is not known how to shut it off either.

The nano particles though have been revealed to be neutralized. That part of the evolution would be shut off in people could not be uplinked in mass as zombie cells of this 1% Brain.

This Lame Cherry will keep on this, and provide you the future news as the projections posted here have now been proven correct again by God's Grace. It appears that this vax must be willing by the person and it must be injected, or the 1% would have just fed it in your taco to you. Future vaxes do not seem to be so prion oriented in those vaxes do not need cooling or have time limits, so the critters which are in there are either these nano particles with a Moregellons, or some new step in this process of evolving the synthetic human.

The advice is to stay away from all of this. Your ally is time. The more chit which happens as events pile up and things melt down, the more busy the police state will be to hunt you. And as an Inspired thought, do not fear Wormwood and her chicks, because what is necessary in this 1% Brain which the vaxed are to become, is Elon Musk's phased array satellites. A big ass meteor and smaller rocks blasting through that satellite field is going to blow holes in it and sent it careening off into other satellites. That will shut down the Satan Brain  part of this and it could be God intended part of Wormwood to liberate people from this electromagnetic spell.

Got to jump into tomorrow as poor orphan girls not donated to by rich people, still have to work in the hope that their will be a heart found in the rich for information which will never appear anywhere else.

This is another Lame Cherry exclusive in matter anti matter, Thank God.