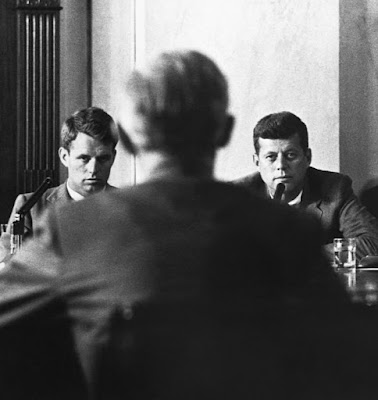 I want you to know one goddamn thing. If you don't cooperate with us, I'll have you in jail in the next two weeks and you take my word for it. I'll have you in jail. And when I do that, what I'm going to do is take your four children away form you an put them in an orphanage an ahve you declared an unfit father.

The failing of American law enforcement on the federal level was amassed in the power of J. Edgar Hoover, not in Hoover who had a priority to protect the system which was thee American Way, but it was based in the misuse of the legislative to criminalize criminals like Al Capone, when the FBI could not find any crimes to charge these careful men with. When the Department of Justice began that degradation of the golden thread of innocent until proven guilty became tarnished.

If you want to understand the hunting down of Americans by the FBI and DOJ in connection with January 6th, all of this resonates back to the organized criminal of Joseph Kennedy in ascending his sons to power, and their focus on eliminating the competition.

What the Kennedy's did in making thought a crime and making a working wage which required the rich to share the fruits of the masses making profits for them, was centered on James Hoffa of the Teamsters.

Jimmy Hoffa engaged in criminal activities, which for the most part were legal in 1776 AD in the year of our Lord. Did Hoffa have people murdered" Yes he did in the grand scheme of projecting the power of the Teamsters so the people who had looked down upon as societal trash in truckers and warehouse employees being exploited, were made to pay these people a middle class wage.

Bobby Kennedy in the Senate with his brother Jack tried to get Hoffa. They failed and Hoffa infuriated them as he would not kiss the ring. Bobby Kennedy as Attorney General failed time and again to convict Jimmy Hoffa, which led the framing of Hoffa associates, one being Joseph Valenti or Joe Franco a thug organizer for Jimmy Hoffa, who was too clever to be caught in crimes, and was instead overcharged like MAGA on January 6th, in a liquor tax of 32.50. Yes thirty bucks is what was a felony by the Kennedy DOJ.

The charges led to a meeting in Chicago where the real Bobby Kennedy was recorded. Forget the propaganda of Bobby Kennedy and read the following discourse as it rings to the injustice of the DOJ and FBI in the modern era. Kennedy did not care about the truth. He told Joe Franco to lie as all he wanted was to get Jimmy Hoffa or others to frame Hoffa.

When Joe Franco refused, Bobbly Kennedy threatened this man's children to stick them into an orphanage. The same confinement torture and threats are in use an this all was going on William Barr's DOJ against Americans.

I've got a deal to offer you - Bobby Kennedy

What kind of deal, let's see where you're coming from?" Joe Franco

What the hell does that mean? Joe Franco

All charges on your cases will be dropped. You will not have any federal charges brought against you for the next five years. No federal agency will touch you on any case whatsoever. Bobby Kennedy

What if I break into a bank and get caught? Joe Franco.

I would see that all federal charges would be set aside. Bobby Kennedy

Just so you understand this, Bobby Kennedy promised that if Joe Franco did anything, and that included raping children, Bobby Kennedy would protect a pedophile, as long as Kennedy got Hoffa framed.

The same issues were involved in Ruby Ridge in framing Randy Weaver, the same issues at Waco in framing David Koresch in forcing a shoot out and the same reality of Oklahoma City in the FBI BATFE providing Terry Nichols with bomb making materials. This goes to Obama and Eric Holder framing Hutatree members to intimidate people on the Right and that is what January 6th was moulded after.

In the memoirs of Joseph Franco, his co author wrote the following in quoting Chief Justice Earl Warren, in disputing the Kennedy conviction of James Hoffa. Read closely what the Chief Justice was disputing as you see the wholesale use of this by the DOJ and FBI today in people are being paid to frame people and people are being paid to destroy innocent people for political reasons.

What you now accept is something which did not occur in America before Bobby Kennedy. Judges once threw cases out of court, if the FBI was paying an informant to go digging for information. If you recall the case of Donald Trump now under investigation by SDNY in Cy Vance leading this DOJ grand jury, Mr. Trump has committed no crimes, but the DOJ in SDNY is data mining in an investigation looking for a crime. There is a right of privacy in America or there was. The legal state could not just go into your home or your records looking for a crime, unless you actually had done something so a Judge would sign off on a warrant, which was proof enough that you actually had been involved in some type of criminal activity.
Criminal activity was an actual crime. Not you had police tape in your pocket at a rally or you opened up your business in this plague propaganda which "proved that you would not obey orders". Those are the things Judges are allowing into court, and there was a time in America that this kind of illegal activity by law enforcement would have had prosecutors held in contempt.

On March 7th, 1967 James R. Hoffa surrendered to federal authorities. The Supreme Court had turned down his final appeal, by  a five to four vote. Chief Justice Earl Warren, writing the dissenting opinion declared that the methods the Justice Department had used to  convict Hoffa were, "an affront to the quality and fairness of federal law enforcement.

The chief witness against Hoffa in the jury tampering case Edward Grady Partin was employed by the government. Warren said, "not for the purpose of testifying to something that had already happened, but rather, for the purpose of infiltration, to see if crimes would in the future be committed. The government in it's zeal  even assisted him in gaining a position for which he could be witness to the confidential relationship of attorney and client.... Her the government reaches into the jail house to employ a man who was himself facing indictments far more serious than the one confronting the man against whom he offered to inform".

Amot these indictments facing Patrin was one for perjury. Nevertheless the court majority upheld the conviction, an Hoffa was transported to the federal penitentiary  at Lewsiburg, Pennsylvania, to begin serving eight years. If he behaved himself, even if he were to serve granted parole, he would be a free man sometime around the middle of 1972.

You need to be reminded of what America was. That the police state did not have this kind of framing authority to destroy people. You actually had to commit a crime to be indicted, and not have Congress passing myriads of laws which it is proven that every American is in violation of some law each day without even knowing it.

This reminder ends with Joseph Franco in the 1960's threatening Bobby Kennedy when Kennedy threatened Mr. Franco's children.  Children were threatened by the United States regime in power and it is now a constant.

Joe Franco never heard from Bobby Kennedy two weeks, four weeks or ever. His first case of a Liquor Stamp for 32.50 was thrown out of the court by an American Judge who ordered federal prosecutors neverr to set foot in his court again in rigging charges on someone.

The last charge an accounting mistake by Joe Franco's accountant, in which the DOJ was playing tapes to the Judge from another wire tap operation in which Franco was not committing a crime, just venting steam, got him convicted for 1 year in federal prison, for something he never did or was able to answer for as the Judge refused the evidence which would clear Franco.

This is what not just Americans but peoples in every nation by the 1%.. With the Supreme Court after sanctioning election theft, sodomy, forced Obamacare fines, it now woke to the past. It is past time that the Catholic Barrett Court returns to the past of Earl Warren and return Rights to Americans and ending this criminal framing of them.