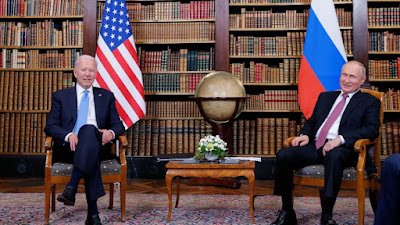 The pedophile suggested I visit Alaska, I thanked Joe, but told him,
I will be taking Alaska as it is Russian.

We now know the assessment of President Vladimir Putin, the Russian military and intelligence services handed down after meeting Resident Joe Biden, the stealer of 2020 AD in the year of our Lord elections, and that is Russia has zero fear of the United States, the English and NATO.

The signal was clear in dealing with the situation in Russia's backyard of the Ukraine, and that definitely means the Baltic states and bordering nations in Georgia and Romania, that America and NATO will lose when Russia moves to annex former territories.

The key in this up to Donald Trump was that Russia could not win a conventional war against the United States and NATO. Russia just signaled that they will win this war and like Hitler in it's re acquiring territories in Europe, World War will not break out as the United States will not have the resolve to fight over these lands.

That message which Vladimir Putin issued has been heard in Peking over Taiwan.

Putin boldly claimed his navy could have attacked the ship in the Black Sea because the West knows "full well that they can't win in that war".

During his annual “Direct Line” call in show, in which citizens can submit queries for the president, he spoke of how the “period of unipolar world is over”.

“No matter what sanctions are imposed on Russia, no matter what the scaremongering, Russia is developing and in some respects our country has surpassed the European countries and even the US,” he said.

While Putin said the nation would not be taking steps that would be harmful to themselves, he said if boundaries were crossed, they would find “asymmetrical ways” to respond.

“I hope the United States will change this attitude not only towards us, but also towards their other allies,” he said.

Putin went on to say that the world was “changing dramatically” - something he said the United States understood.

Inquiry pointed to several events in a hot summer, May did not manifest and the time line reset as has June. The time lines are compacting. The time line of August will be revealed and that was the month that Russia and China moved militarily.

Russia just stated that all the American sanctions have only made that nation stronger. They are now independent. Russia also stated it will strike the British to humiliate them and there is nothing America will do to defend the English.

Like Hitler, Putin is astute in foreign psychology. The message Putin sent is resonating in the Ukraine, Baltic States, Romania and all of the East of Europe, that America is not going to save them. Vladimir Putin has broken NATO East. The reason he has broken NATO east is the German Italian Austrian center is soft. They are sucking Russian energy and are not going to back NATO over the Russian sphere expanding into eastern Europe.

NATO is finished, and by the 1% the United States is hunting down it;s last viable population after January 6th by the FBI. Vladimir Putin has assessed the United States and knows America is divided by the 1%. The weapons America has have been turned onto her own People.

Russia has correctly deduced that there is not  any political support from Americans for  a Biden war against Russia and China, and remember the Pentagon installed Biden in election theft, and the DIA has been running these ludicrous Qanon operations against Americans to frame them as it becomes the police authority replacing the FBI which it has been shattering.

Russia has assessed the France and Britain are no longer a threat to Russian domestic policy. The United States is therefore alone and as the 1% are evolving that once free people, America is no longer a conventional war threat.

President Vladimir Putin has alerted the world that Russia is coming. Russian policy is to annex old boarders and if NATO resists, Russia will push her borders to Prague and her allies of Germany, Austria and Italy, and if resistance is met there, Russia will push to Normandy and obliterate the English from ever being an American beach head again as a pawn of London.

Analysis: Putin got exactly what he wanted from Biden in Geneva ...