The Not as Fat View 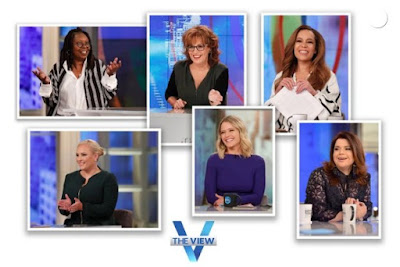 In a terrible weight imbalance, it has weighed in that Meghan McCain, offspring of John the hero McCain who suicided himself, after it became a reality that his cancer treatment cured him, and of course, he would not politically survive his betrayal of America in a revote for Obamacare rationed death, has become rotundly unhappy at ABC's The View and is leaving.

This is quite distressing as the fat content of the View has dropped 300 pounds on the Meghan fatless diet. Now there is only fat Whoopie, fat Joy, fat Ana and some saggy titted prego paunched Meghan Kelly wanna be and some Quadroon who wants to be a Kamala Harris look alike.

I could understand Oprah, as she was on in the afternoon, as failed women were ready to sit down and watch a fat ugly black woman to feel better in not being a fat ugly black woman exploiting people. That makes sense instead of eating a box of chips or having a battery addiction to your vibrator and developing cunt callous. The View though is just nothing for women, except Asians as the show is racist against Asians in they never hire Asians, but all the same, no race can turn anywhere on that show and feel better, as hell they transgenders look at Whoopie and see how repulsive they are, and you know there have to be lezbos in that bunch, and then those mixed breeds have no outlet. The View is all the ugliness, except of course for fat ugly Asians who look at the View and see how fat and ugly the others are which makes Asians feel superior.

So maybe this is Peking doing all this as Slant Eyes of the World Unite and are ready to take over the world, maybe ride some white, brown and black cock or face sit some lezbo rainbow twat, sort of like the View as the Coronavirus Wuhan. plague of female America.

Whatever is the reality of Chicom ownership of America by the Biden and Obama, Meghan McCain is unhappy and frankly this is a crime, as Meghan McCain being made unhappy is a crime, and now the women of the View are guilty of hate crimes punishable by 20 years in jail. A Wisconsin Judge stated this in a recent finding.

The Lame Cherry is concerned about Megs in she tubbed out after Daddy Hero died, and she is unhappy, so is there going to be a shortage of Twinkies and Ho Ho's when Meghan goes on a binge in being thrown out by the CIA ABC hierarchy and she plumps out to like the 900 pound gorilla in the room.
Meghan will be too tonnage to fly. No cars or trucks can carry that load. I doubt the 2 by 6's in her floors will hold her as he mansion is not a barn. Think of the bed collapsing in Megs might be hurt. What about her husband. She might roll over on him during Incredible Hulk sex and kill the poor bastard.

The fatties of the View would then be guilty of murder by fat sex or injury to fat body Meghan when her bed collapses and let us not forget that the hundreds of Mexicans Meghan probably has working for her, are sleeping under her bedroom, and when those joists bust, it will be Florida Condo part two and like 300 Mexicans will be smushed under the weight of Meghan. Those View fats are going to be looking at Charlie Manson  time in the grey bar lezbo hotel.

I'm concerned about Meghan McCain sincerly though, as I have read her stupid ideas when she thought she could do what I do so well. I listened to her on the radio when she thought she could be Rush Limbaugh and all she did was cackle like Kamala. Then she fell into The View, and displaced her weight around there. That seemed to be her niche, and you know what the problem was on the View with the women there, in Meghan was getting all the soiled panties from lezbos and all of the sticky photos with cum on them were for Meghan, not the other fatties. There is only so much a fatty like Joy can take in that kind of humiliation or that transgender like Whoopie, before the other lesser fatties start currying favor with the head fatties in going on the attack of Meghan.

It was only a matter of Biden time before the CIA ABC's new Negress in White Privileged racism went after the Caucasian fatty in Meghan McCain. Yes Kim Godwin is a racist in forcing out a fat White woman as Meghan McCain's strength reminded her of all she would never be. Meghan was so white she brought up images of KKK sheets. Meghan brought up memories of Afroid males all getting hard over fat White girls instead of fat ugly Black girls named Kim. All of this is unsaid and Meghan is being blamed for it all and is just miserable in being the fatty everyone watching the View wants and no one wants these genders which are the View.

Yes Meghan McCain's ouster does not bode well of Pedo Joe Biden, who Meghan voted for. The coup is taking place at ABC against John the hero McCain Whiteness and the same is happening in the White House for Kamala Harris to remove White Joe Biden.

It is all obvious as Kim Godwin is erasing White with a black marker.  Soon Meghan and Joe will both be in adjoining mansions with a White beach front with ethnics only allowed to mow the lawn and clean the toilets.

In the meantime, ABC needs to hire this Gwen Berry thing. She is a guy who will fit right in, and her tonnage is right. 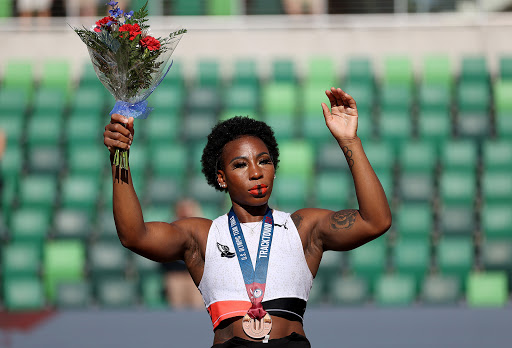