A Tractor with a Baby Bump 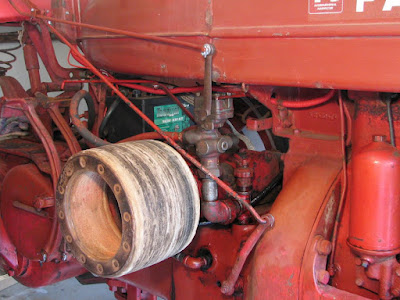 If I had time I would just buy things complete, but this adventure and teaching lesson would be no good to you if I was rich, as everything would be pretty rich people pictures on the internet.

This is the progressing version of the Gremlin Rich Guy Super MTA which we purchased and needed the Tractor Whisperer to raise it from the dead. It keeps trying to cripple up in stuck floats and the fixed right brake is stuck again, which means another project for me.

All of our Farmalls had belt pulley drives on them. We used them to roll up electric fence in the spring after grazing our fields. I do remember at 4 helping to cut wood on a buzz saw, but the era was passing for the belt pulley and was moving to PTO drives.

This Super MTA  though did not have a pulley drive. It does though have some Goddamn nigger rigged hydraulics on it. Where you put in oil, there is an additional extension for the Behlen Power Steering. Hooked into that is an additional gonzo inch plus oil hoses which feed into the oil flow lever, and goes into what I thought was the belly pump reservoir on M's. I have no idea what this shit is, but I do know it was in the way, and I had to strong arm both the hydraulic  hoses off, and the two for the cylinders to get this drive on. It is HEAVY and there is not any room, and what I'm posting is hopefully going to save the few of you some hurt as I did get hurt.

First thing, these drives have 6 bolts, all different sizes. The two longest ones you HAVE TO HAVE IN  THE HOLES before you try to mount this on the tractor, because you are going to have to loosen the 4 bolts or nuts which hold the gas tank on to get them in. This is a klusterfuck times ten, as I did not know if an M pulley drive I got from JYG would fit on a Super MTA. The internet is full of shit heads who know nothing about things like this as you get both comments in it will work and not work.

The reason I got this M pulley was someone said it would work on an H........yeah a pulley is the round thing that the belt runs on, not the drive, so I got the JYG pulley home it is an inch too big for an H. That was a 130 dollar replacement which is coming as shipping is costly on these heavy things. That will be another post.........as the guy assured me this would fit, being too lazy to go measure it as I asked.

So I measured the M pulley and the bolts on the Super M, and they both would match. Who knows on the gear and this is a big project which I frowned about, so I got the thing finally in, and the gasket off. Here is your million dollar knowledge. What is used now is silicon gasket to make metal to metal seals, so you do not have to get expensive gaskets or drop them into the transmission. Mine was blue goo, so TL got that lined up on the tractor as I did a dry assembly and sure enough the thing went on, and I could move the lever on and off, but that does not mean jack or shit in real life, it just means you can start putting the thing together and see if it works.

So I carefully or not so much tightened down the top long bolts, and side bolts to not stop the cast metal as that would be really a pisser. Had a hell of a time with one bolt in the seat end anchor of the gas tank, so went onto the hoses which were a trial, but got them on, finally just bolted the gas tank down and figured 3 bolts is as good as 4 and tried it again with Holy Angles and the bolt started, so the Super has 4 bolts holding the tank.

I figured on trying it. the rod to pull it in gear was too short. I used it anyway,  and see I have to switch the hole that the rod rides in and hope that it works with the hydraulic rod there. Started the tractor, great it run. eased the clutch out, no smashing sounds of gears. Tried the PTO, again no smashing sounds. So put the drive into gear and it took off just like it was made for it.

No oil in the reservoir and it sounded pretty good. Next phase is to add the oil to get things topped off in the hydraulic and the belt pulley drive. I have to switch the hose holder as that got twisted, got to replace two leaking hoses out of that power steering feed, which has the distributor jammed into the oil filter canister, I just can't see this jack shit nigger rigging as it is a complicated mess that has to be fixed, but I got a belt pulley drive mounted. Have to mount the pulley and see if the belt will slip by the loader frame and figure out what to do with that. JYG might have some flat combine roller pulley I can put on there. It was not a good venture of 3 hours doing this. The good news was the hoses are out of the way, and I do not have to replace them. 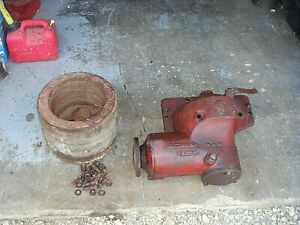 Have ordered a 26 dollar sediment bowl for the gas tank, as even with the Tractor Whisperer cranking on it, it is still dripping. I hate having that gas drip and I hate turning it off, and then the float sticks, and it just gets fixed.

This is about midway in this. The regulator JYG things is stuck so the battery goes dead and I have to leave the cable off, but at least I know the probable drain, as the battery has stayed up.

I just don't know how a millionaire could leave things go to shit like this. My old man was awful on maintaining anything, and his stuff would still start.

I still have to convince the oil fill cover which some jackass broke the internal casing where the threaded rod screws into. I do not know what to do on that one yet, but am thinking of taking it apart, getting the rod out of the cover, and get is somehow held in place. I do not want to tap weld that rod into place, but that maybe a last resort. Am leery of using JB Weld or something, but that is future tense in the Holy Ghost figuring out what or enlightening me.

Yes I thought I got a deal with this Super MTA. Craigslist sells these for 4000 bucks, but getting to that point is getting me educated on things I care not to be educated on.

I guess a piece of equipment is not really yours until you have been inside of it  and changed things on it. It learns to yield to your will when that happens.

As I look back on this, I figure if not for me, this would have been junked or sold to someone who would have pulled it home and probably given up on it after spending too much and it would have rotted away more.

It has on it lichens, which are brown on the hood. When it rained 3 inches, they turned green. This is one hell of a great deal of work for a tractor I just thought I was going to pump the tire up on and drive home. Takes a good deal of effort to get some tractor back to what my old man had and I took for granted.

I have no idea why people pull belt pulley drives off. Then again my old man had me take our's off a 560 as the seal leaked. Yes do not replace seal, instead get a more expensive cover, bolts and seal.

This is your lesson in doing things up again. The long bolts mounted and silicon are worth a million bucks in troubleshooting.

You may have to pull the hydraulic hoses on an M to get it mounted. For the H there is just electric wires. I think I may have to get a longer ground cable. Will get it mounted first and then figure out what I need.

Fricking back to square one, 1941 this tractor was birthed and that is where we are 70 years on the H and 50 on the Super MTA.

Getting ready for the power being shut off and saving the chainsaw.  Every tractor needs a baby bump and the Super is now prego with hers.