Framing of Jan6ers has an FBI Problem 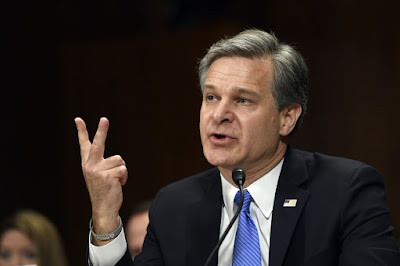 I wanted my legacy to be that I told the Truth twice,
in outdoing Bobby Mueller and Jimmy Comey......by two.

OK, we have a sort of problem in the FBI is telling the Truth.

FBI has found SCANT evidence the Capitol riot was an organized plot to overturn the election and does not believe it was centrally coordinated by Trump supporters or far-right groups, agents say - despite Democrat claims it was a COUP

One must remember since that Charleston frame up, that Richmond Gun Rally frame up, that the FBI has been stating that there is this White Supremacist terror movement in America which is a danger. Hell Homeland just the last week issued some warning on this vaxer stuff all linked to White People, and now the FBI issues a report that there was no organization or conspiracy to overthrow the Government, at least from the People. The FBI has not spoken about what Congress did on that day setting people up, why Trump abandoned Americans, and why the DOJ is holding people in torture after the FBI hunts people down and has arrested over 500 of them.

Speaking of which, most of these 500 people have been smeared, including by Judges who say they are some big threat and can not be released. The fact is the FBI just said they were too stupid to organize a coup or insurrection, so this really blows the entire case structure against people charged dressing alike, having dangerous scepters and carrying mysterious police tape.

It is time to end this on the FBI's own finding, as Joe Biden has given them 5000 Muslim terrorists out of Afghanistan to hunt down again, who are real terrorists and this domestic terrorism can just fade away for the bad mojo it was as it does not exist in this network which the propaganda says.

The reason the Lame Cherry only says MOST, is there is that Black kid who was paid by CNN or something and instigated violence and really was a turd in hovering around dead Ashli Babbitt when she was murdered.

The FBI could also invest time in arresting the murderer of Ashli Babbitt and which cops that have not committed suicide in remorse in getting that other poor woman trampled to death with her Black man friend.

I honestly do not know what we are going to do if the FBI starts telling the Truth. I do not want to even think about it if the DOJ like John Durham actually starts enforcing the law on the elite, like Hillary Clinton and arrests her. It may be too much for the People of America to handle in it will confuse them in there is not two Americas where one gets left in Afghanistan and one where the rich make money off of importing invaders and terrorists.

I'm still trying to digest all this Truth, well one Truth in years of lies, but the fact is there is not one reason for any of the Jan6ers framed should be in jail or awaiting trial. They should have all charges dropped, all their legal bills paid, and be compensated for all they have lost with all of their rights restored fully. Hand them a 10 million dollar bonus too if they got murdered, beat up, lost their job or if they just think this sucks the hind tit and want to be compensated. There is like over 3 trillion in the Biden Pelosi stimulus, so make sure the Americans get something first for a change in compensation.

Think that about covers it all.