The Revolution Does Not Start Today 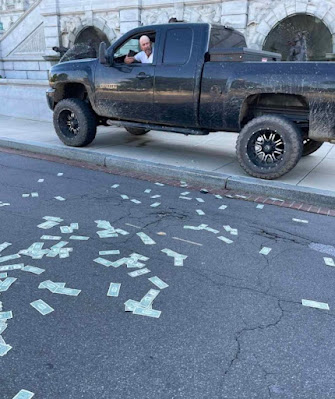 The Lame Cherry is saddened that those who have Destroyed the American Dream have finally cracked another American victim in Floyd Ray Roseberry.

In studying Mr. Roseberry, you can see how tired he is already. He mentions going home Sunday one way or the other. Thursday to Sunday is a long time to stay alert and without sleep become more paranoid. Mr. Roseberry's knees are wore out, he is in pain, can not afford treatment and his wife had skin cancer in which her nose was almost removed, and again no medical coverage.

So we arrive at Floyd Roseberry, who the FBI has been warning of existed since the Richmond 2nd Amendment Rally, the Jan6 Rally and Homeland just warned us that vax terrorists were all over the place, and of course we need those Domestic Terrorism Laws which this poor orphan girl published exclusively today.

Floyd Roseberry is the perfect patsy for the 1% to crackdown on Americans. He is in a big black truck, he is a Southerner, he cusses with profanity and he is the danger which is out there which the FBI, Homeland and DOJ has been warning about. Everyone will forget as they smile in their Congressional halls as this plays out as this is what the hired politicians desired, that Floyd Roseberry is there because he is a cripple in pain and his wife is maimed by cancer. Not due to Obamacare, but because of the polices out of Washington DC which make healthcare so expensive, because the 1% wants control over those trillions like they control everything else.

F*cking revolution starts today, Joe Biden and before you go crackin’ any pops on me you better get your military experts out and ask them what a seven-pound keg of gunpowder would do with two-and-a-half proud of [unintelligible] will do, mother f*cker! You know what else? I’m not going to light it. I’m going to give Joe Biden the option to.”

He went on to claim that “he is one of five,” but didn’t clarify what that meant. “Them little roadblocks settin’ up comin’ on down here, those roadblocks ain’t gonna scare f*ckin nobody. You wastin’ your time. Southern boys are here. You can take me out but you know what’s gonna happen, Joe Biden, there’s gonna be a chain reaction. And that chain reaction is going to be on your hands when you crack a bullet through my windows.”

Floyd Roseberry is not going to start any revolution, no more than John Browne did or anyone else. All he has done is give those who want to crackdown on what is left of the Constitution and obliterate it their platform to cement this absolute tyranny. Mr. Roseberry will be portrayed by  the media which will write his epitaph for the 1% as a loon of the right, as he fits that perfect profile of the Southerner. This action only helps those obliterating America. This only hurts those innocent Jan6ers who are locked up in torture as they will never get out of prison now and every court will be biased to punish them for trespassing with life in prison.

In reading comments on Populist, all the people were calling this an FBI operation. It does not matter what it is, as what matters is what will follow in the crackdown on Americans. Floyd Roseberry is not going to start any revolution in his actions any more than George Floyd did dying of a bad heart methed up with Coronavirus.

Floyd Roseberry is the reason the Lame Cherry has told you to not get yourself into trouble. To obey the laws, pay your  taxes, to stay home and do your talking to Christ and take care of yourself and your families in preparing for what is coming.

This is just another sad moment in American history. All Americans will be made to suffer for this, including liberals enjoying this spectacle of Floyd Roseberry in all it's prejudices, but when one reads the Domestic Terror Bills, one finds out it is about creating a police state within a police state and it is about hunting every person down without any checks or balances.

There are 7040 grains of powder per pound. 1 grain equals 143 foot pounds of energy.  Seven pounds of powder is about 7 million foot pounds of energy.  Plus whatever else he has and as it requires more material for a nuclear reaction and one does not set of anti matter reactions with gunpowder, it makes little difference if it is metallic powder or plastick. as a 2000 pound bomb from a B 52 is a whole lot bigger and it did not end the world, no more than all the bombs the British dropped on Dresden or the Nazis at Stalingrad.

It will shred a vehicle and a  person like a tin can, crater concrete and take out windows, all of which the poor people are going to be charged paying for, but this is not the doomsday the creator thinks.

So there is a great deal more energy in a Righteous man with the Spirit of God in them, than all the war materials in the world. It is why the focus is on corrupting the human source.

So do not mirror this action as it only harms everyone. Read your Bible, pray, sit on your porch and have a beer and lie to yourselves the way your poor relatives did that tomorrow will be a better day. It's life as the alternative is harming everyone trying to build that bridge to a better time line for all.

Just behave as life sucks enough for everyone.