The Life & Times of Dictator Biden 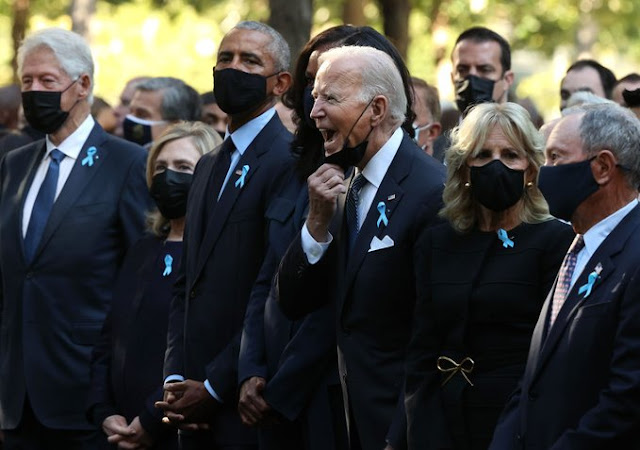 Do ever wonder what an alien if they were not demons, or for that matter demons, think in observing the group above on twenty years after 9 11.

Bill Clinton, Hillary Clinton, Barack Obama, Michelle Obama, Dictator Joe Biden, Jill Biden and Michael Bloomberg. a group which has blasphemed God and has broken the 10 Commandments to the last one.

Not appearing with the new American Dictator, was George W. Bush, who appeared at another scene, where he linked the events of January 6th with September 11th. George W. Bush also linked the Muslim terrorists of  9 11 with the Americans framed by the government on Jan6.

George W. Bush also extolled Americans to trust our elected officials.  I wonder about that as W.s daddy was the family friend of the nut who shot Ronald Reagan, Bill Clinton has a Special Prosecutor steal the election from daddy Bush in Lawrence Walsh. Then there was Bill Clinton selling out America to Asians to steal his second election.
Then there was W, who lied about being an Evangelical in his first election and then it looked like he stole the election from John Kerry.

Barack Hussein Obama, the Birther, who had two elections stolen for him.

Next to the American Dictator is his second wife, who is her own part in another stolen election.

All elected and George W. Bush tells us to trust them, as the great threat George W. Bush sees are Americans who have been framed, not the regime he created which framed them, nor the dictator in the White House who just handed Asia over to Muslim terrorist and Chinese communists, and that Dictator is making genocide war on 100 million ReVaxNiks in America.

It is interesting the way that George W. Bush judges the world. Dictators in the White House are not a threat at all.

There is a difference between a senile old fool armed with nuclear weapons and a madman Dictator surrounded by ex presidents who just swore to eliminate Republican governors who oppose him and starve to death 100 million ReVaxNiks.