Who is Dr. Paul Twomey 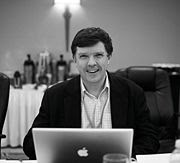 A most interesting thing happened on the way to Lawrence Sinclair's website on early Monday morning at 1:45 AM, when he made a posting from someone that was searched back from Geektools.com to the following ISP address.

Being curious, I went to Yahoo and entered the address and found a Dr. Paul Twomey connected to it as he was chairman of ICANN, a non profit organization which handles all Domain Names and ISP numbers.
ICANN was listed as having almost a $6 million operational budget in 2007 with 60 employees.
Mr. Twomey was not mentioned as it would be rude to connect someone with an employee who is a supporter of the Barack Obama camp contacting Mr. Sinclair.

The reason Mr. Twomey is now being mentioned is a most curious event occurred from 1:45 AM Monday to 11 AM Monday.
A blogger contacted me for information on the posting on Mr. Sinclair's site. As there have been numerous hacking, stalking and harassment emails from the Obama supporters (One was traced back to Microsoft and Microsoft refuses to acknowledge it is employing a stalker.), it was decided to recheck the facts on ICANN.

That immediately sets up the red warning lights as within a few hours of the address appearing and the mere mention, not even by name, of him causes a complete scrubbing of the internet where there were several listings not 10 hours before.
There are only a few alphabet listing government security agencies with that kind of power.

Certain very powerful elites, as I have noticed have been watching Lawrence Sinclair and the bloggers covering this story. These are ghosts who one never sees, but by God's inspiration one sees the veil of misted tracks.

So the question is who is Dr. Twomey?

As Wikipedia has a public profile with the above photo, the entire Wiki profile will be posted here in case that too disappears.

From Wikipedia, the free encyclopedia

Paul Twomey (born 18 July 1961) is the Chief Executive Officer and President of the Internet Corporation for Assigned Names and Numbers (ICANN).

He was appointed Chief Executive Officer of the National Office for the Information Economy (NOIE) in 1997. As a government unit responsible for developing Australian Government IT policy, it was during this time he began his involvement with ICANN. Though this role he became chair of the influential ICANN Government Advisory Committee which served as the organisation's liaison with world governments.

Following his departure from NOIE, Dr. Twomey created a consultancy with Ira Magaziner (Domestic Policy Adviser to former US President Bill Clinton) called Argo P@cific. Despite his move to the private sector, he continued his role on the ICANN GAC until November 2002 through an ongoing posting as external advisor to the Australian Government.

On 27 March 2003 he was elected to his current position at ICANN.

As one can see Dr. Twomey is a very connected individual with the international community influencing all and advising Congress.

To put it mildly, Dr. Paul Twomey is thee gatekeeper to the entire internet.

None of this is meant to in any way besmirch Dr. Twomey in being involved in the stalking of American citizens no more than Bill Gates of Microsoft was involved when it was employees using company facilities to contact people and try to gain information.

What is the question though is why are these major influential corporations and government associated organizations meant for the public good being utilized to attack United States citizens.

What is it that a mere mention "of the manager" of ICANN can in a few hours scrub Dr. Twomey's name from any association from the address at Marina Del Ray?

How can an organization which is supposed to be operating for the public good be censuring information about it's CEO?

How can ICANN which is only supposed to be responsible for Domain Names and ISP's so scrub the internet that not even cached pages will show up in a few hours on either Yahoo or Google?

Mr. Twomey is a very important person to illicit that kind of complete and thorough response, and, it is all exposed now because someone from ICANN and appearing as an Obama supporter was emailing Mr. Lawrence Sinclair emails out of Yahoo accounts.

This is beyond the Obama camp, beyond Delaware and Chicago syndicates, beyond Bill Clinton with Australian world trade influence and beyond stalkers.

This is the ocean where the large fish dwell and while they enjoy watching the little people entertain them on the internet. They do not appreciate silly employees playing politics trolling the entire internet back on their doorsteps.

Sweeping that doorstep clean is a certain sign the ghosts do not want anyone looking at the ICANN house.

agtG
Posted by Lame Cherry at 9:35 AM