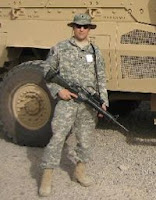 Barack Obama has now been challenged by a United States Solider in a Second Louie, Scott Easterling who is on duty in Iraq.

I have both admiration and concern for Lt. Easterling as he has literally put his entire future on the line over the Obama qualifications issue. The military might not have as long of reach as it once did in 1950, but it still can make life miserable for anyone in and out of the service.
His entire benefits package is now at risk if he receives a court martial and has a dishonorable discharge.

In this, I have the problem with Dr. Orly Taitz, as if she had like Phil Berg and hosts of others simply followed some suggestions, people like Lt. Easterling would not now be in jeopardy.
There are a host of ways to leverage the information concerning Mr. Obama's birth certificate and passport without having to drag the United States officer corp into this.
The last thing the United States needs is a factionalized military and and officer corp which is going to have to make choices in obeying the person in the White House or demand the same information Lt. Easterling is.
A nation can not run a military like this and it is not good for America that these lawyers have phished around in this soup, deliberately filing cases they knew were bogus and just grabbing headlines from this.

The United States military must be a non political unit, even if Bill Clinton made it a political camp. Many of those officers were retired out, but some remain and now the chain of command will have to decide what to do with Lt. Easterling.
Most officers would simply ignore Barack Obama, and follow chain of command orders. That is where Lt. Easterling is going to find the rub in this situation, because the military will issue him direct orders from his superior, and if he does not obey them, he is going to be deemed by the JAG as disobeying not Obama's orders, but a superior.
There are all sorts of ways a political officer corp could run this so Lt. Easterling's case is never heard.

He should have been protected from this. Of course, if he had done this exact same thing with George W. Bush, he would be on Nightline, championed by Cynthia McFadden. The Obama world is quite different.

The smart thing for the military would be to ignore Lt. Easterling and find a quick exit reason for him to end up in Texas. I would presume if they want him out at his age, they could run him until he doesn't pass a physical and that ends the Obama administration's problem.
Lt. Easterling is not going to get any MSM press. They will ignore him.

It should never have come to this and the lawers are equally to blame as Obama, as the entire legal group has not once gone after the issues which mattered legally in public funds and tax money.
If they were equally serious, the matter of fact of the British Nationality Act as I have written on and shared, which would make the courts decide if American law was superceded by International Laws as Bryer and Ginsburg have claimed, would force Obama's citizenship into the subpoena category his passport and birth records.
Would someone in the White House, a British subject, proven as such by British law, have to obey the US Constitution or British Parliament.

American Soldiers should never be put into this position as that is not their job. They are not drilled for this type of venture and are destroyed by it.

May God bless Lt. Easterling as his generals are not going to appreciate this in the least.