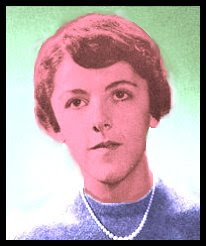 Something needs to be explained in the birth of Barack Hussein Obama jr. in that if the records were simply there for the dropping out of the sky, the records would be public, or, like in the case of the group which data mined Barack Obama's passport files, and that individual started cooperating with authorities, he would be found dead as he was outside his Church with bullet holes in him.

If there was evidence which did exist, it is now sitting in the archive files of the cartels which run this world as the blackmail puppet strings to keep Birdie Obama in line.
Of course, Obama is so Mugabe Marxist that he makes Karl Marx look like George Washington.


People have to understand that this is not "your records on file" which you can not get at or anyone in authority could simply remove, Obama's records have already been dry cleaned in his birth records and sealed with a full bead weld that they will never see the light of day.
That is why this blog noted the arena which Obama was vulnerable in was his passport files and his student loans, because that is where one person died already and where Obama has spent almost a million dollars in legal fees hiding the evidence there.
This is why I pointed out months ago that Obama's vulnerability is Justice Breyer and Ginsburg international law, because legally under British Mandate in the British Nationality Act of 1948 which Birdie Obama was born under states, once a British subject always a British subject.

Birdie Obama qualifies on these counts, because his record of birth father is Barack Hussein Obama sr. of Kenya and in Barack sr. marrying an underage minor (a minor who in most civilized nations would have been termed raped by an adult male as Ms. Dunham was under 18 years old when she had sex.), made Ms. Dunham a British subject under British law.

The only way to end British citizenship is a public renouncement which neither Mrs. Obama nor Barack jr. ever did.
Barack is British, period.

Why this requires being visited again is when this blog spoke of Mrs. Obama having Birdie in Canada, it was viewed as normal behavior.
Normal means no American airline would have allowed a pregnant woman to fly to Africa nor would any physician due to the vaccines a pregnant woman would have to be given as it would endanger the baby.
That would conclude a Canadian birth as it is certain Birdie was born not in Hawaii and later registered there as a live birth. One does not register a child in Hawaii if the child is born in Washington state.

So either Mrs. Obama lied to the airlines, lied to a doctor to get herself vaccinate with poisons to gain entrance to Kenya which endangered the baby she was carrying, or she had the baby in the likely location of British Columbia, as a woman married to a foreign national.

That is the point, either Mrs. Stanley Obama is exposed as a psychotic female endanger her baby or she is exposed as a manipulative female registering the child in Canada, because Birdie was not born in America.

The tale of Washington state is the evidence which no one has really reviewed as it shows information and the most bizarre of circumstances.
We know for a fact that a friend at Mercer Island, Washington, stated Stanley arrived on the Island in August 1961. Arrived means she was travelling from some location. Airlines do indeed have records of flights, so if she was flying from Africa, Pan Am would have that data. Those records are stored in Florida.
My attempt to have someone in the archive search those records was met with as much silence as the Pakistani government reviewing their Barack Soetero records.

If not Kenya, then once again it means Canada. Logical forensic deduction means British Columbia.
We simply know Stanley Ann Obama was on the move in August of 1961 as the fact. Women were in English societies kept almost a week in hospital, so that data would fit that wherever Birdie was birthed, Stanley Ann had changed her mind about wherever she was in finding no home in Africa as Barack sr. had a wife there and later going back to Hawaii where there appears to be friction with her parents.
In any event, Barack jr. was registered twice which appears her parents registered Birdie and so did Stanley Ann. Apparently being a hated American in hated America, was not such a bad deal after all for the Dunham Marxists.

A key understanding in Washington is not long after Birdie was born, the fake address of residence in Hawaii was not the Obama residence. In fact, in 1961, while she was supposed to be married to Barack sr. she was in fact living at an apartment in Seattle at 516 13th Avenue E, Capitol Hill. 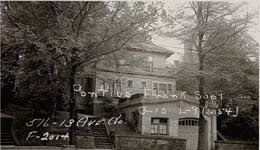 There she was going under the name Mrs. Anna Obama as an alias. She also at this time enrolled at the University of Washington. 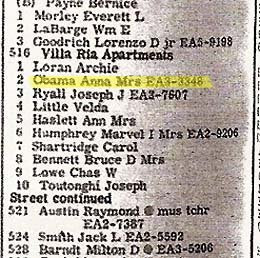 This is key in records which could be subpoenaed in determining just what type of funding, loans related to the government and nationality Mrs. Obama was operating under for the purpose of noting where Birdie learned at Occidental College and Columbia to tap into the Fulbright Scholarship's for foreigners grants.

In the bizarre story, Barack sr. had already flown the coop in Hawaii and by 1962, Mrs. Obama was back and settled into Hawaii.
This couple never resided together the evidence shows and gives more forensic deduction to the thought that young Stanley Ann Dunham was a sexual partner like her grandparents, Stanley and Madelyn Dunham of Frank Marshall Davis. Davis very well could have impregnated the young girl as he is on record in having molested a 13 year old child with his wife in their care.

Only DNA testing would prove just what was occurring in this strange story.

But by 1964, Stanley Ann Obama would divorce Barack sr. and by 1967 have married Lolo Soetoro to have a daughter by 1970.
It would be in Indonesia that she would for the Ford Foundation set up microfinance operations to bankrupt the 3rd world and take it over. Another odd twist is Stanley Ann was in anthropological education and ended up in banking like her mother.

As this blog has pointed out, Stanley Ann apparently tried a last ditch effort to make something of her wayward, drugged out son, Barry in what would be termed an intervention. It seems to be based upon the CIA studies to create Manchurian type candidates and why Obama is so phobic about the terrorists held in captivity at Gitmo, in releasing them.
Obama would describe his mother in a most toxic way in terming her, "the dominant figure of my formative years".

Children often describe parents as strict, kind, strong and loving, but for Obama to use the martial term of dominant notes an entirely different and antagonistic relationship which he resents.
This manifested in Obama leaving his mother to die of cancer after the intervention episode.

It also reveals one last slap at Barack Obama in a mother's rejection and abandonment of him, as she apparently believed the intervention did not succeed, for before she died of cancer which Obama was using as a sympathy vote in the campaign, Stanley Ann Soetero was attempting once again to taste the Jungle Fever of her youth in trying to take custody of a South Korean baby born of an American black father in the mid 1990's.
Amusing irony that around 1995, Barack Obama's own mother had basically written her first protege off in Birdie, and she was attempting to clone a nubian second chance in Madonna like parade of rescuing a child from his own people.
Stanley Ann abandons Birdie a second time seeing what a loser this guy is and by 2008, an American liberal majority elect the guy to the White House.

Ain't that buying the 3 legged mule at a horse auction.

Heinz Ward of the Pittsburgh Steelers is a Korean Black child, and he seemed to do wonderfully well to the delight of millions of Americans in being left to his own development without some liberal unbalanced woman kidnapping him to brainwash him to greatness.

So that is the continuing tale of Stanley and Birdie Obama. If the evidence was there, it is no doubt now laundered, and those who have seen it, have died from lead poisoning. It is an unsafe venture for people to delve into as the cartels are not about to allow this to upset the Obama boat.
By their actions, their concerns are the college and passport records and not the birth records any longer.

This is why I advocated certain London or American lawyers file cases based upon British Law due to Breyer and Ginsburg incorporating foreign law into American Law to test the standard as these cases would have standing in answering the question, which laws does Barack Obama have to follow first, American Constitutional Law or British Commonwealth Law, as he was born British and is British Indonesian currently.

It all becomes history though as each day buries the reality that British subject Obama is installed like a 48 year old molar with roots buried deep down to China with no one with a pliers to pull him out of the Oval Office.

This investigative work is not for normal people as if they do stumble onto anything, they will either be ruined like Eliot Spitzer, incarcerated like Lawrence Sinclair or humiliated like Joseph Farah was. This is the big league with only one league, one referee, one owner and one cheating doctrine in they always win.
It is an interesting story though as more bits fit together and a few more people daily furrow their brows reading the facts and shake their heads in disbelief wondering how this all came to be.

Obama of her dreams

Clone me an Obama

Dobie Gillis Dunham
Posted by Lame Cherry at 9:21 AM