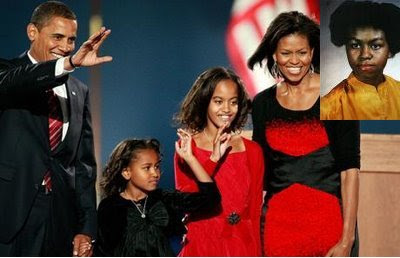 I many times use humor to assist the medicine of teaching to be more pleasurable, so that the message lasts in the memory of those who see it. I would though choose here to be serious for this article as it is serious in what appears to be a deliberate fabrication by the entire news media which I will call ASSgate.

I ask readers not to shut down now and go into stereotype mode in making jokes, because something bizarre is occurring that is an exclusive of this blog alone in exposing this literal propaganda crime that the liberal media has been involved in.

Study the photo above of Michelle Obama at one of the big nights of the Obama rock tour of 2008. Notice how thin this woman is to being bone exposed skinny in cheek bones, collar bones, hip bones and fat content of her breasts depleted.
Next study the youthful photo of Michelle Obama in how her body normally puts on it's layer of fat in she actually has deposits in her face and in this case logical deduction in normal black areas of buttocks and thighs.

The photos on the left are Michelle with her typical large posterior and if one chooses too look closely her large female apparatus, a full face, and her large arms.
Now study the photos on the right in which she almost looks freakishly starving, once again thin in the face.......but this time a bit more rotund in the hips, but by the White House issue of Vogue she is thin and the classic Muchelle pipes in her arms, just like at the State of the Union.

The question is, how is this woman from day to day in photos and live feeds, changing from the big ass Muchelle to a thin Michelle.
I realize the novice will say "airbrush", but have you ever heard in public usage a digital moving picture airbrush, that is being used from the White House, CNN, ABC, BBC, NBC, CBS, FOX, MSNBC etc... ect... etc...
How is Michelle lithe in her yellow fire hydrant dress and yet at the same period walking Bobama looking like a woman who just delivered triplets the day before.

As further proof that something in rotten in Denmark or Obamamark media: 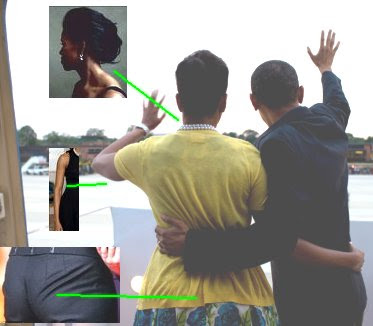 This is a photo of the Obamas which is posting around the internet. Instead of joining the crowd following the comments here on how large zip code Muchelle is, I instead went out and pulled three stock photos of Michelle Obama in showing:

Her neck is streamlined in a fashion photo, but in the untouched photo she looks like Idi Amin in her pearls have her fat layer almost rolling over them.

Her infamous White House black dress photo has arms which are toned, yet the untouched photo shows the aging, fat sag of women like Michelle.

Her posterior in black slacks in Paris with Carla Sarkozy show a large rear, but the rear in the untouched photo of the same period of time is almost twice as large as what was released in Paris.

What appears in this is there is a vast conspiracy in the entire media literally using some Star Wars California John Lucas photo editing equipment on the fly, all coordinated with Microsoft or Apple software.
It is one thing for Vogue to airbrush photos, but it is a completely different set of circumstances for networks and reporters to know this is going on in seeing rotund Muchelle and being part of a fabrication of the news which is ALL supposed to be real.

This is of complete concern, even more than the uproar of TV Guide pasting Oprah's head on Ann Margaret's body, because the news media earlier this year coordinated with David Axelrod a complete campaign to envision Michelle Obama as Jackie Kennedy.
There were vast resources and propaganda deliberately invested by the media in an attempt for political conditioning and gain to attempt to sway the public with fake pictures to condition both the French and Americans that Michelle Obama was this same glamorous, thin, fashionable woman.
In doing this propaganda, the media joined the ranks of North Korea, Iran, Hitler's Germany and Stalin's Russia in lying to the public and breaking their legal code of trust.

This is immense as it appears to have the entire media signed on in fabricating what Michelle Obama actually looks like. It makes one wonder if the people at Denver were being shown a jumbotron fakery like the entire world while the audience rent with emotion never did figure out the fat Muchelle they saw was not the same Michelle on the television screens.

There can not be two Michelle Obama's in one being fat one day and one being thin the next day. This is a media fabrication which is bizarre and it does make one wonder from the literal cover up of Obama's heritage to the media not reporting Mr. Obama has spent into debt a record 2 trillion dollars in a few months, just how much else we are witnessing is digital fakery utilizing new computer software coming out of the Hollywood sci fi industry.

Is this why, Barack Obama has grey hair one appearance, black shoe polish hair the next and now settling to an odd glowing white in his hair? One does not get that from "Just for Men", that looks a great deal now with the fraudulent Michelle Obama photos as criminal deception by the media to manipulate the entire world public.

Seeing is believing in the published photos. Something is rotten here and it is time the media and the Axelrod Obama Machine get the clutch engaged and the Congress, FCC and Justice start reviewing what is going on in Big Brother Obama Photoshopping on the fly.