What I can tell you about Kenyan Obama 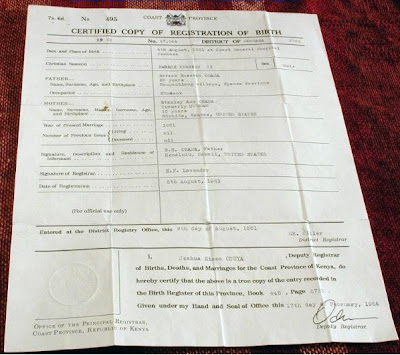 There are a few things which have captured my eye concerning the Barack Hussein Obama birth certificate which no one has divulged which will be exclusive here and point to why I deem this an authentic document and in conclusion I believe I know where this document originated from as I touched on it in my work here recently.

The first tell are the folds of this document. In having examined documents of this period and more recent documents, they in group are all folded into these little office yello sized envelopes, usually with a window inside to reveal contents.
For this to be a forgery, the forger would have to know exactly this process in which birth certificates are in copy handed out to the public. It might sound like a simple thing, but those folds are the one thing which someone would overlook.

Paper color is correct, as is age of coloration, wear on the ribbon ink of the font.

This document matches exactly what it should look like having been generated in 1964 and held in files for this long for "safekeeping".

This brings me to the source of this. I realize World Net Daily states the anonymous person is concerned about their life, but considering the document is now secured by Orly Taitz, has been copied and is appearing in more places than Obama's forgery......the lawyers family is not in any danger.
In lawyer, I'm not speaking of Orly Taitz, but the legal firm or family members who had custody of the divorce papers of Stanley Ann "mentaly cruelty Barack sr." Obama.

These are the papers I featured here not long ago in pointing out that in the strangest of terms, Stanley Ann Dunham committed perjury in stating she was a resident of Hawaii for two years when she was a resident of Washington during this time.
As that residency had nothing to do with filing for divorce, it is now speculated that 2 year residency in lying about it might have to do with custody of a 2 year old Barry.

Stanley Ann's papers were filed in January of 1964. Her other court procedings I believe in the series of documents shows to March of 1964.
Look closely at the date of this document issued out of Kenya, February 17th, 1964. This would fit the timeline in Stanley Ann filing, lawyers discussing legalities of custody and residency as an America (not a natural born American).
Stanley Ann's Lawyer would have requested a copy of this birth certificate so that she would have sole custody of the two year old child. See unlike being an Obama in the White House, one does need a real birth certificate in court to prove a child is really your child.

Granted it is not Madelyn Dunham, so we still do not know how a non pregnant looking Stanley Ann in swim suit dropped an 8 pound kid a few months later, but nothing in this has made any sense from the start.

So in reasonable deduction, this is the Lawyer's copy of the Stanley Ann Dunham Obama divorce proceedings. He kept it in files for his legal protection and the family or law firm kept them as everyone does in boxes of papers which mean nothing to anyone.
This is what I was speaking about in there is more evidence out there than people even know. Someone it is deducted figured this out after something jogged in someone's memory or someone did a bit of investigative work and was allowed access to these old unsealed files which mattered to no one, except Axelrod Inc.

I actually find it amusing that Miss Tavisham Stanley and Madelyn in Pip Obama's Great Expectations in screwing over Barack sr. with mental cruelty charges to get custody of this child, lied in court papers committing perjury on residency........then had the audacity to not lie concerning where this illegal alien was born.
THIS is probably what the the 2 year residency was about in being a shifty way of claiming Obama was an American non alien, so she would get custody even when he was born in Kenya.

These twisters have a real Oliver on their hands, as they did not have the foresight to figure out he would be President of some country who needed natural born, and instead went to the expediency of just getting their hands on this child to punish the old man.

Stupidly in the criminal enterprise of Axelrod Inc., in stealing trillions. non taxpayer Geithner, terrorist Napolitano and a million dollars in trying to hide all of this, for one cent this cast of criminals could have used a match and burned up the evidence.
Don't send a lawyer to do a mop woman's job.

This all looks authentic and from the time line I have researched, this document fits exactly where it should in a nasty divorce proceeding for full custody of an African child.

While I have thought that the circus of Taitz and Farah with their crew has been doing nothing but publicity stunts and having people chase red herrings, this has a hat off from the person who came forward with this.
It also points to why the people who have been scamming fake birth certificates this past month looking like the Obamaniacs assaulting Lawrence Sinclair, were probably low level plants to guard against this very document which has been picked up on tapped phone and email communications from it's surfacing.

All of this brings a conclusion this is Barack Obama's Waterloo.

PS: Is it not interesting that the residency of Stanley Ann Dunham Obama is Wichita, Kansas. That might be another Madelyn Dunham story.

Verify the Registrar and signature and let the good times roll.

Sing it pretty Bruce as you elected this British fraud.........