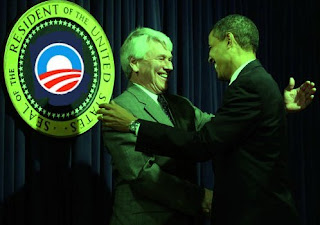 If you have ever been in the plains of Africa among the wait a bit thorn, you really don't have to see a lion to know one is around. There is an electric spore with lion even when you blunder into them as Tony Henley the Professional Hunter used to make sport of the occasion and talk a lion down in a very loud voice like Crocodile Dundee.
Granted often times the lions would bluff charge, retreat, charge and then have to be put down in close quarters, but after the metallic taste of copper was washed out of your mouth, you knew that a predator was upon this earth.

If you want to understand what has been going in the Obama den of iniquity, a good place to start is the cannibalized Greg Craig who was White House Counsel. Mr. Craig is likely the first Obama supporter assassinated by the inner circle who told him to march out on Gitmo and then blamed him for the will of the American people in they didn't want terrorists stuck in their communities when Gitmo closed, because just like New York they are finding it is expensive and now they are targets for terror attacks.
What is interesting about Greg Craig is there appears a great deal of intrigue on the inside in Rahm Emmanuel shafted him from behind. This was signed off on by Val-erie Jarrett, who was knifing Anita Dunn, who had that picture of David Axelrod and her doing pillow talk at a White House Press Conference.

Dunn's husband then to appease him for his wife being pillowed by Axelrod, was given the White House Counsel job for doing such a bang up job in getting Judge Carter to drop the Birther suit after Robert Bauer had Carter hire an employee from his law firm to writer Carter's excuse for dropping the Birther issue.
So intrigue is the smoldering fire of the Obama passion clique.

I am about to advance an exclusive that is exclusive to here, but will build the analogy in analogies or something like that.

We know that Barack Obama has been dealing with Persians, counterfeiters, Khadaffi, Palestinian terrorists in gaining funds from them, and in promising them great gobs of Jewish land.

We know that for Persian support Mr. Obama traded away eastern Europe.

We know that for "nothing" Barack Obama rewarded Syria with all kinds of financial and diplomatic goodies. (Syria has a heavy hand in the Bekaah Valley counterfeiting schemes which channelled huge amounts into Obama's 2008 campaign coffers.)

We know that Mr. Auchi, Saddam Hussein's bagman financed Obama's Senate campaign and purchased for him his mansion in Chicago.

We know that Mr. Obama as a student was royally treated by the Pakistani elite families in their giving a partridge hunt in his honor.

We know now from the deathly silence of Mr. Obama on his Twitter Revolution in Iran, that it was all a quid pro quo for the Persians to round up freedom loving Iranians for execution.

We know that Mr. Obama leaked the information which President Sarkozy of France was about to make public on the Persian nuclear weapons factory as a deal with Russia and the Islamocommunists.

We know that Mr. Obama is in an all out war against Jewish right wing settlers in denying them homes in Jerusalem and the Israeli state.

There seems to be a pattern in this does it not?

Does not Mr. Obama seem to be a merchant of sorts? A conduit of business where money flows to him from terror states and the people who end up suffering are freedom loving people in Iran, the Israeli state and America.

Now in noticing that pattern, let us return to Greg Craig, and his chief responsibility was to end questioning of terrorists and to close Gitmo within one year's time.
Mr. Craig reached a stonewall of non American support and was crucified for it quickly.

Ask yourself though why is it that Mr. Obama does not want terrorists, along with Rahm Emanuel and Val-erie Jarret, being questioned.
Just what is it in Jamie Gorelick walls of separation which under Bill Clinton brought about the 9 11 attacks, that the terrorists then were being coddled by the US leftist government?

Do you not see the pattern here, that the terrorists have information which Mr. Obama for his benefactors is attempting to keep from being discovered.

Does it not also in logical deduction assume that if the European axis which makes great deals of money from the criminal mafia of the Middle East and Muslim oil, with these same Isalmic terrorists, would be expecting to be paid back for all their financial and terror support for Mr. Obama to get into the White House.
Notice there were not any major terror events aimed at Obama policy when he was killing bushels of "bad" terrorists for his good terror friends.

Let us progress with that understanding that Mr. Obama in not completing his paid for promise in closing Gitmo, just might be getting some threats in being exposed from the Ashkenaz of Europe who Mr. Emmanuel is one of and from terrorists who desire their comrades free by January 2010.

Look who is running the terror show in Eric Holder who released FALN terrorists and got a pardon for Saddam money launderer Marc Rich.
Eric Holder for Bearick Bowbama is now running the New York terror trials to attack the CIA, DOD and the Bush family who were protecting America from this same axis attack.

Mr. Holder announces he is seeking the death penalty, but the problem is federal law states that people "tortured" can not be tried in court and must be released.

Does this not all now seem more and more that in quid pro quo, Barack Hussein Obama is following orders to close Gitmo to set numerous Muslim terrorists free back to the people who funded his campaign.
Is not this a giant terrorist freeing operation which Greg Craig failed at, and now has Robert Bauer running to devastate with Eric Holder American security and to release numbers of terrorists as Mr. Obama was hired to do.

That is the exclusive in this to be studied as there is a definite pattern in the Lockerbie terrorist was released with Barack Obama's blessing to Khadaffi in exchange for oil contracts.
The Gitmo terrorists are the same commodities in this international criminal market and it is past time to assess memos, internal workings and just what the "behind the scenes" promises have been from Barack Obama since 2008 to terrorists concerning the Gitmo terrorists.

What exactly was the discourse concerning the Gitmo terrorists as it seems quite expensive as Mr. Obama's first act was releasing Xianxang terrorists at one million dollars a head to settle them island resorts.
If one needs a reminder in this exclusive, Xianxang has exploded for communist China as a revolution pit during this same exchange period.

That all looks like the Gitmo terrorists are an expensive commodity in buying favor and securing antagonisms.

To put it plainly, what Ollie North was railed against with Richard Secord in Iran Contra, Mr. Obama appears on an international mafia scale to be dealing in the human terrorist trade. Iran Contra is a grain of sand compared to the criminal scandal of what is being conducted by the Obama administration universe of crime.

No one has put this together yet or broken the immense story of Obama criminality. This is not impeachable in scope but treasonous in fruition by Barack Obama. He has been selling terrorists and trading terrorists for personal gain and his policies.

The spore all points to this criminal operation by Barack Hussein Obama and his inner clique. Nancy Pelosi in ranting about the CIA lying to her is part of this cover up of what Obama has been conducting.

These indeed are all high crimes against the United States and against Persian Patriots to Jewish Settlers.

Mr. Obama has been caught in trading terrorists in Libya and rewarding Syria for "nothing". He is bartering terrorists around the world. That is what closing Gitmo is about as Middle Eastern and European cartels paid Mr. Obama to free their terrorists.

The blood trail all is a spore which says Obama is the roaring lion seeking who he may devour. It is past time that the press, Justice Department, public and Congress start doing their jobs and end the terror traffic being conducted by Barack Obama.