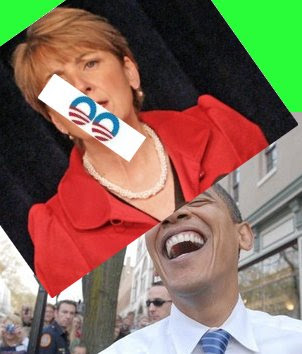 Incredible! The Democrats in Massachusetts have found in Martha Coakley the candidate who puts the things Democrat Al Franken and David Letterman joke about actually into child rape policy.

No wonder Barack Hussein Obama is abandoning the White House to go Pedochusettes to campaign for Coakley, as Obama probably was familiar with his mentor's Frank Marshall Davis' curling iron too.

Here is the splendid Teddy Kennedy replacement policy which Martha Coakley inflicted on the people of Massachusettes.

When the Mother, legal representation and Child Protection all brought this to District Attorney Coakley's attention, she dragged her feet, LEFT THIS PERVERT OUT FOR 2 YEARS WITH NO BAIL and apparently was auditioning for the role of Michael Dukakis setting Willey Horton free.

Martha Coakley is a friend to child rapists everywhere and will be certain to be a top vote getter from them unanimously. Now we see why Barack Hussein Obama is skipping second date night, for a Twitter weekend with Coakley, as David Letterman is probably forging a ballot to make sure Coakley gets his perverted vote.

This all gets worse as Jake Tapper was on Sean Hannity and in Freudian Slip related that Coakley was ahead in the polls, when it is American Patriot Scott Brown who is leading by 5 points.
Tapper would be fixed on the Tea Party convention, complaining that ABC was not invited and only fair and balanced press was. Tapper had no judgments about Martha Coakley and the curling iron child rapists to only state "he read some stories on it".
Tapper did though have plenty to judge on Tea Party people in stating that ABC News "did too cover the summer Tea Party gathering in some unknown ABC woman was there and Jake Tapper had Twittered about it".

Incredible that Jake Tapper now thinks his Tweeting is covering a news story. Twitter needs to gain access payments from ABC if Tapper is using Twitter as his broadcast approval of Martha Coakley and the curling iron child rapist.

That is thee absolute ghetto green vomit puke problem in all of this in Coakley is a menace to society, along with Al Franken stealing an election, along with Barack Obama ACORNING an election, and the entire Jake Tapper media menacing society and all that matters is Tapper Tweeting news!

On top of this Martha Coakley states that Kennedy voters in Catholics, Christians and anyone with morals, like someone who survived an aborticide infanticide does not belong in an emergency room treating anyone nor making their living in the medical professions.
INCREDIBLE, that sounds like Obama telling "disgusting" Jews that they can look at the Israeli state, but they just can not live there.

This is the anti American face of the NeoProgs completely in Martha Coakley and her swooning weekend date mate Barack Hussein Obama in letting child molesters free to prey on society and telling moral people they don't belong in jobs.

That is why this blog has constantly covered this and championed women and children for years to protect them from John Kerry's daughters in stating at the DNC that "this is an issue of choice for children" which meant children being raped by adults and the pedophiles not being prosecuted as Martha Coakley accomplished for years.
This is what this gutter trash promotes and practices. It is dirty birds of a feather flocking little children together. There IS NO DIFFERENCE between the pedophile and the attorney who does not prosecute nor the politician who promotes the protection of these heinous crimes.

Martha Coakley doesn't belong in the US Senate with pervert Al Franken, she belongs in prison for aiding a child rapist.
What Coakley's henchmen did in bashing a reporter to the ground and Coakley terming all Americans supporting American Patriot Scott Brown as "stalkers" is exactly what she has allowed happen to two year old children in Massachusetts.