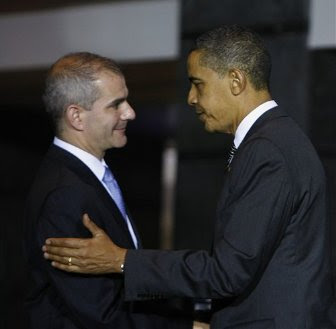 Of course, it all makes perfect sense in Obama Speak, that the Flight 253 terror bombing of the explosive condom was not Barack Obama's fault, not Eric Holder's fault, not Janet Napolitano's fault, not Democrats in Congress cutting airport security fault, but it was all a mysterious intelligence coordinator's fault, who has now been outed in Michael Leiter.

The reason Michael Leiter is the one being targeted by Barack Obama and the puppy press is because this former law clerk of liberal Supreme Court Justice Steven Breyer was appointed due to is Naval Credentials in being a pilot, the 113th President of the Harvard Law Review, served as a Harvard fellow at the International War Crimes Tribunal for Yugoslavia, was assistant US Attorney in Virginia prosecuting a wide range of cases, served as Deputy General Counsel and Assistant Director of the President's Commission on Intelligence Capabilities, served as Deputy Chief of National Intelligence, and then was appointed by Bush 43 as Director of the National Counterterrorism Center in December 2007.

I ask readers to just glance at that resume and then compare it to someone who got into Harvard with a Saudi backed terrorist letter, after smoking dope, went on a partridge safari in Pakistan and was a community organizer in Chicago.

Compare Michael Leiter's credentials and accomplishments to the Obama in the White House, and one realizes quickly the American who Obama and the puppy press are smearing is the man who should have been elected in 2008 to be President!

The New York Times lead this "pass the buck from stopping at Obama" smear on Mr. Leiter in blaming his agency and none other.
This has now been followed up with Mr. Leiter committed the sin of going on vacation during the happy obamadays like everyone else did, and he didn't come off the ski slopes to deal with the Christmas Day bomber.

Compare that to Janet Napolitano WHO IS BOSS AND RESPONSIBLE FOR ALL OF THIS going out and lying to Americans in stating the system worked.
Perhaps readers can recall that it took Obama 4 days to come off the beach from his vacation to even start wondering what that burning sensation was in a Muslim's underwear.

This Michael Leiter smear is why Obama kept a few Bush appointees in office. Obama blows up his Afnamistan and he can point his club finger at Robert Gates, Sec. of Defense of Gen. Patraeus now in Europe.
A Muslim bomb condom bomb shows up and it is Bush appointee Micheal Leiter who is going to be blamed and not snot wiper on her sleeve Janet Napolitano.

.....and get this, even Obama voter Bob Barr came out defending Obama on the Flight 253 terror attack. Looks more and more that Barr was just another Noel Sheppard stooge going about fragmenting the Republican right wing vote by running hisself, so McCain would be defeated and Obama would usurp the Office of the President of these United States.

Barack Hussein Obama and Bob Barr says the terror attacks are not Obama's fault and critics are off base.
It must be raining in why every one's legs are wet.

Micheal Leiter is someone I have no connection with, but like Jim Zorn, when it is the boss's fault and he is smearing and blaming the help, this blog will note it and stand up for anyone being overhauled by the puppy press and the government political smear machine.

I will note that from December 2007 to December 2009, there were no terror attacks, especially when a George W. Bush was running the intelligence services. Things started to immediately degrade when Barack Hussein Obama came into power in 2009.
2009 saw 4 major terror events in the California wildfires set by Mexican proxies hired by Islamocommunists, the military recruiter assassinations, Nidal Hasan and Flight 253, all of which have been covered up, buried or now trying to blame George W. Bush again for something that is due to Obama's culture of terrorist sympathy which pervades Jarrett Inc.

Barack Hussein Obama is completely to blame for Flight 253. It was not Michael Leiter's responsibility to come off a ski slope as he is not the only agent at NCTC. The process continues even while Janet Napolitano is playing doctor terrorizing Americans to wipe snot on there arms.

It was Barack Hussein Obama's responsibility though as White House occupant to come off the beach immediately and to express words of encouragement to Americans that the government which was not keeping them safe was keeping them safe.

As Harry Truman said, "The buck stops here". Barack Obama's version is, "Bush was once here blame him as I can't stop spending the bucks in bribing terrorists".

I dare anyone to compare Michael Leiter's resume alone to the combined resumes of Barack Hussein Obama, Muchelle Obama, Aaron Burr Biden, Jill Biden, Buddy Biden, Eric Holder, Janet Napolitano, every Obama czar, Hillary Clinton, Obama's entire cabinet, and I will bet that Michael Leiter is more qualified alone to do his job or be President, than the entire Axelrod, Obama and Jarrett Inc. clique.

It is the Obama culture which is the problem and not Michael Leiter as the resumes prove. Agents can only do their jobs in protecting America with supporting staff, supporting policy a real American President protecting them so they can protect Americans.

George W. Bush didn't even attempt to blame Rockefeller stooges Obama voter Colin Powell or Dick Armitage for initiating Plamegate nor to blame Valerie Plame and Joe Wilson for covering up the French refining Niger yellowcake for Saddam, but now Obama vacationing his way through his friendly terrorist world gets to smear Michael Leiter for doing less than Obama was doing more of on his vacation.