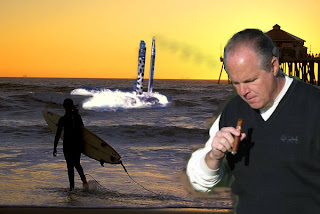 I am asking the question no one will, and asking it in all seriousness, if Rush Limbaugh was deliberately attacked with a frequency weapon while on Hawaiian vacation?

Consider the facts in Rush Limbaugh is frequently under physician observation, because people who are in his position have contracts worth millions of dollars and corporate sponsors and legal representatives of insurance companies require these very expensive celebrities to undergo yearly physicals to prove the investment is worth it.

For the reality, the US military has brought online numbers of new frequency weapons to induce headaches to passiveness in crowd control measures. A low setting producing neurological stunning of the body, high settings kill.
This is all in the public domain now in riot control measures.

Nicholas Tesla developed such weaponry known as Scalar or electromagnetic beams. Nikita Kruschev spoke of these weapons being developed in the Soviet Union as of the 1960 period. The same cell phones which produce brain tumors are the same type frequencies which can be made to affect the human body.

I do not like making a great deal of my life public as I do not care to have anyone believe me or not, as the debate takes up time I do not have to spare to convince people, I could care less about convincing.
I have though since the Obama benefactors started cementing power in mid 2008, had numerous computer attacks, surveillance on my personal phone conversations in conjunction with certain military bases being use to grab the signals from the air, which is quite illegal, and in the autumn of 2008 by accident in passive sensors, I noted a wiping out of digital broadcast signals for two months in my location. In layman's terms, something was interfering with the television broadcast signals I monitor, and for two months I was personally not feeling very well.

As of one Sunday, this interference stopped and the broadcast signals from 5 stations returned to normal, and, I was quite feeling well again within a day.

This all started within weeks of the census bureau mapping my location with a GPS tag.

(As a side note, have you noticed the stories growing of people with GPS systems being sent off on wild goose chases and being lost? Someone is jacking the GPS system in an apparent attempt to throw off the tracking and weaponry which seems to be tracking certain non Obama Americans.)

Rush Limbaugh, had a specific hotel room location. As he was not apparently having sex with someone to induce a heart stress period, the physicians all now state there is no evidence of any heart attacks or problems, it leaves the door open to the question if Barack Obama decided to assassinate Rush Limbaugh while in Hawaii?

It is a simple GPS matter of mapping the hotel room, an image sensor to track Mr. Limbaugh through the walls can be utilized from the street, ocean, air or space. A confined then static weapon would then be aimed at his chest, which can penetrate even a bunker, and the neurological stress would short circuit his healthy heart, so no effects would be present except a DOA.

Mr. Limbaugh stated he felt this heart attack coming on. Heart attacks do not come on in symptoms, you either have one or you do not. This points to something generated over a period of time to build to a neuro short circuit climax.
As no virus was found, this was not a virus symptom and the hospital certainly would have found if this was something Mr. Limbaugh, smoked, ate or drank.

So the question which does indeed need to asked as Mr. Limbaugh was rushed by ambulance to the hospital in serious condition, how he suddenly got better once out of the hotel room?

The Russian FSB has been poisoning people from London to the Ukraine with Polonium and other poisons. All of this goes one against enemies of the state. Rush Limbaugh is on Obama's enemies list, and as of late it has been quite lethal for the CIA and Soldiers to be on Mr. Obama's lists.

I make no claims in this, but I know what I know in experience and science, and I know what this has a probability of looking like, and this right now has a 60% chance this was a electo frequency attack on Rush Limbaugh, as all the other possibilities have been discredited.

There are numerous Americans who have felt the scorn of Obama from Rod Blagojevich in legal remedy, John Edwards in being smeared, Elliot Spitzer to being outed, Lawrence Sinclair to being set up, and numerous bloggers who have had their emails tapped and other situations they do not quite comprehend as just flukes.
The technology is there to do what Rush Limbaugh experienced. It is time that Republicans in Congress started asking the DOD just what is available in Star Wars and if Mr. Limbaugh's symptoms could be mimicked to create exactly what he suffered from.

Strange is it not when it is the globalist backed ilk making wild claims about things Americans are doing the internet is alive with accusations, but when it is someone like Rush Limbaugh suffering from what looks like a neuro electric attack, all of these protectors of the world, seem never to notice or write one story or have one program on who just tried to assassinate Rush Hudson Limbaugh.