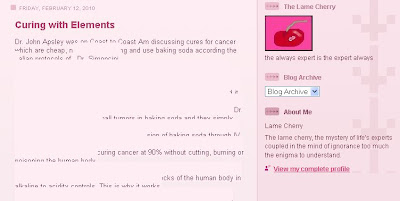 For those who missed it, in the article below, "Escheleon" the massive artificial intelligence network which includes NSA, CIA, FBI and more alphabet agencies that covertly will ever be made public, made a glitch visit to the Lame Cherry blog today as proven by the above evidence.

I know I am under the information gathering protocols in the way I check internet connection, the way hard settings change on my computer, my phone calls sound like woodpeckers are on the at times and certain other tells I will not make public which reveal artificial intelligence is monitoring my comings and goings, without Obama listening to my cell phone calls.

The above photo though shows how the spiders glean information from off the web in rapidly scanning every line and storing it. This is not Google snapshots of a web page, but as you can see it is a line by line scan that literally was so intense in protocol codex it wiped font from the page.

That is a major intelligence system doing that, using massive computer sifting and it means something I have been doing is really setting off the flags again. The something which started this was mentioning Ali Mohamed yesterday, because Lord God did the dates come out after I merely noted a few things about him and visited a few websites. It was like having a two thousand pound gorilla sitting on my hard drive.

All of that is interesting as Ali Mohamed is supposed to be in custody, not anything important and off the radar as his wife notes.

Obviously though it has made this girly page quite popular beyond even a lesbian lust, as when I posted the below article, the artificials zapped it three times all in the same manner.
I finally fooled them as to how I will not reveal, but I saved this screen grab just to show how popular I am or I is, depending on Obama teleprompters.

What is funny is I post on the Obama's and the globalists or security networks could not now care less about the halo head or the wife. That is a most interesting and telling thing.

What does amaze me in the amount of information I am Inspired to share, how some of what I consider the most mundane gets the crawlies lurking about. It just goes to show that some of the most up front and seemingly unimportant information, has some of the biggest stories attached to it.

Oh well it is always nice to have so many suitors now that it is close to Valentines Day.

Just click on that photo though and study it a bit as it is most interesting in what the codex transpires. This is a great deal like the email Jeff Rense forwarded to me from his server which had been zapped, except for one key line which was then highlighted in color.

They waste resources and time on Americans who are exercising their Constitutional rights, while not following around terrorists.
Makes perfect sense I suppose in an Obama world.