Obama on my Mind 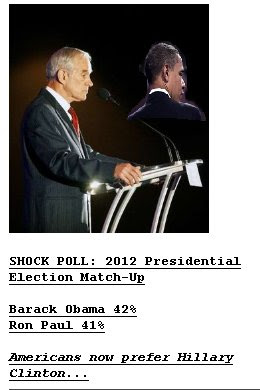 America is coming apart at the seams.

There is no doubt about this, as a week ago just minding my own business a clerk went into a speech about the government taxing poor people and today I had a clerk follow me around telling me that he could not stand Obama, repeatedly.

There are real signs in this that this is not just the Silent Majority, but a coup of sorts is building in Washington, DC and across the Limbaugh fruited plain.

Arizona is arresting illegals by the bushels in direct in your face to Obama.

In Washington, the Post's star reporter in Dana Milbank has had a two week field day on the Obama's in calling Michelle "milk toast" and in the Obama nuclear summit, literally using the word OCCUPANT for Barack Hussein Obama as former leader of the free world.

Those types of situations coming from the liberal elite reveal a Rockefeller fracture in the Obama regime and things are now progressing that even a fringe person like Ron Paul without his Paulites rigging polls is about dead even with Obama in a Presidential run.
Once again, Hillary Clinton's name is surfacing as the coup against Barack Obama is coming full steam ahead.

Thee absolute best news in this, or series of best news events is the Pentagon is going to court martial Lt. Col. Terry Lakin. I was reading the NBC story on it and the Obama idiots over there in commentary were cheering this in calling this Patriot Terry Lakin a coward.
These idiots could not read the handwriting on the wall as if Obama was in control of the Pentagon this would have been ignored as it was swept under the rug for all of 2009 when numerous military personnel were questioning Obama in court.

This requires discernment, because a shift has occurred in the Pentagon. Roberts Gates in the press is being touted thee best Sec. of Defense in history. This means the Rockefellers are backing Gates. When one adds the court martial against Terry Lakin, where he literally will be able to demand PROOF of Obama's passport, birth certificate and college loans to ascertain if Mr. Obama is legitimate or not for the light bird's defense, this is pointing to the Pentagon is literally not only at odds with Barack Hussein Obama, but is affording an opportunity in performing a very American coup on Obama legally.

This is why the Obamites on NBC cheering this are the absolute fools they are. They can not comprehend this IS thee last thing Obama wants, as he spent 2 million dollars hiding this, and now the military branch of the United States, which has absolute authority to remove an occupant of the White House is about to hold a trial on the very subject of Obama eligibility.

That reveals the utter moronic stupidity Obama commenters are in whole as they are supporting something Obama is hiding and the indications are the Pentagon has just laid the groundwork to remove Barack Hussein Obama without impeachment, but by simple arrest.

That is what this all means in scope and context. When the US Army holds this court martial, Lt. Col. Lakin must be afforded all evidence to defend himself. This means all of Obama's documentation must be produced.
If Obama denies this, then he is in violation of the military codes and he will be impeached or removed immediately from office. Court orders obtaining Obama's papers being hidden if showing Obama took college loans under an assumed name, foreign grants, and his passport does not match his Pakistani claims of going there, all prove Lt. Col. Lakin is correct.
The judgment then is the Constitutional crisis of world history in everything Obama has done is illegal. He is a criminal.
Joe Biden can not assume the Presidency as he was on fraud ticket.

Hillary Clinton can not assume the Presidency as she was appointed by usurper Obama.

As this falls to Congress, Pelosi and Reid nor any member can assume the Presdiency as they were part of a fraud in installing Obama and criminals too.

In reality, this falls literally to who the liberals have been touting in Robert Gates and possibly Scott Brown of Massachusettes as thee only people not touched by this fraud, except Sarah Palin as she had not part in voting for Obama to be in the White House.

Literally America might be run by a civilian head of the Pentagon from the Bush administration until elections could be held, as Obama and the Obamites have literally tainted every political figure in the federal government.

The clerk who was chanting at me today that he could not stand Obama, also made mention that the national guard troops he was speaking with were just as adament in their loathing Mr. Obama.
I have noted time again the absolute scowling faces of "photo op" Soldiers, regardless of race, not looking the least bit pleased to being around an Obama who as of late was sorry that America was a Super Power.

So for the NBC ignorant mob, they will rue the day they cheered this, as there is more going on here in the Pentagon taking this up and not sweeping it away as has been done for over a year.

Dana Milbank is a sign, and the Pentagon brass are a sign that something has changed. This is not about leverage on Obama, but indicates something running much deeper.
Obama has slapped the Veterans, the Soldiers, Catholics, Jews, Tea Partiers, the Dali Lama etc.... and it is now a force which the Rockefellers are involved as Kissinger and Associates were involved in this concerning Obama and nuclear munitions.

I pray as the kings heart is in the Lord's hand to do as God pleases, that God moves the judges in the court martial of Lt. Col. Lakin to do God's will. This is a moment that the world will change forever in the defense of Terry Lakin.
God bless him and God's will be done in Jesus Name. Amen