A Polish Assassination in Theory

There is information concerning the deaths of the Polish leadership in Russia which are setting off red alerts for this blog, from the Russian leadership all over this, Russian military pointing to "pilot error" and the chiming of the press to blame this all on the Polish pilots when the TU-154 is a modern aircraft with all the alarm bells and whistles to alert a pilot that all is not well, so one does not use your jet as a tree trimmer.

In theory, this can be just as easily termed an assassination of the Polish leadership by the evidence which is reported.

As reported exclusively here, the TU-154 has a host of back up systems and autopilots to deal with pilot error. One must understand that altimeters, speed and GPS all have warning chirps and lights in the event an airliner is not where it is supposed to be.
For the Polish jet to be trimming trees, means it was off course, which it can not be due to GPS. It would have to be lower than 100 feet which should send off warning signals, so it could not be lower than it should have been, yet it was, and no pilot is going to ignore those signals.

Yet we are told from Russian air controllers, that the Polish pilots "ignored" Russian directions.

Now why would experienced Polish pilots do this? They apparently were believing their instruments over what the Russian flight controllers were directing them.

That would mean the instrumentation was off. Off in GPS is one thing, but when your instrumentation is having two separate malfunctions in the height the aircraft is flying, then that is not coincidence, but a deliberate act as two systems on a Presidential plane just service months ago, are not both going to go out, when there are 3 autopilots operating on a TU-154 in an over redundant system.

Is it possible to rip GPS satellites? If one recalls the information on this blog, in last Christmas, there were several reports of people being lost using GPS, that indicates it is quite possible to rig satellites or influence their data in shifting the grid.
That is a fact, and if it happens in Washington, America, then it can happen in Smolensk, Russia with an airliner if people with assets desire such an outcome. A lost car is a lost plane, in that all satellites are jigged to not be precise, so enemies of the United States can not fly missiles through our windows.
Would it be possible with enough radar amplification to jam and refeed an GPS signal if desired. Logic dictates the answer as an affirmative, especially if Russian engineers were servicing this aircraft months ago. 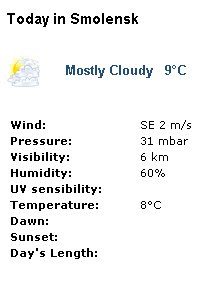 The condition of "fog" should have no bearing on this, but yet in researching screen grabs for Smolensk, there should not have been fog in the least in that area. Conditions were not 100% humidity, but as the information proves only 60%.
Fog requires in normal circumstances 100% humidity to form. In the extended forecast in Russian no mass fog banks are noted. There was not snow on the ground for thermal inversions, no stagnant air masses, and the most damning evidence of all, the barometric readings were 31 inches which is a high reading.

I will put this quote on for people to ponder about fog being created:

Another common type of formation is associated with sea fog (also known as haar or fret). This is due to the peculiar effect of salt. Clouds of all types require minute hygroscopic particles upon which water vapor can condense. Over the ocean surface, the most common particles are salt from salt spray produced by breaking waves. Except in areas of storminess, the most common areas of breaking waves are located near coastlines, hence the greatest densities of airborne salt particles are there. Condensation on salt particles has been observed to occur at humidities as low as 70%, thus fog can occur even in relatively dry air in suitable locations such as the California coast.

So just as cloud seeding is known to eliminate fog, it is apparent that if one misted an area with low humidity with salts, that a dense fog could be induced.

While fog would not interfere with a Polish aircrew utilizing instrument flying, fog would make them blind to visual identification if the Russian controllers were telling them one thing, and their instruments were reporting another, that they were higher in altitude and at another GPS location.

In essence, it is possible to produced fog. It is possible to make GPS devices think they are at another location, adding the above evidence, when the TU-154 is a crash and pilot proof airliner that only comes down when shot down or runs out of fuel in it's history, it is not logical that the claim of pilot error is feasible on such a Russian aircraft of note.
Polish pilots are not going to ignore warning chirps on altimeters and GPS in being familiar with this aircraft. If the devices were giving bogus readings and not alerting the pilots, the pilots would ignore the Russian controllers and literally fly the plain into the trees thinking all was safe.

The Russians were far too immediate in pointing the fingers at the Poles. Furthermore it was reported this interesting quote:

The crash occurred three days after Putin and Tusk attended a joint memorial for the Katyn victims. The event was seen as a huge symbolic advance in Russia's often thorny relations with Poland.

Tusk is the Polish opposition to the current dead President Kaczynski, along with the entire Polish leadership in military, political and security circles.
How convenient like the current Putin puppet in the Ukraine that all were making nice just before their respective governments turned over from pro American political leadership.

There was no fog and is forecast no fog in Smolensk for the following week after this event of immediate dense fog, but yet the conditions with an east wind showed clear skies, without the heat to burn off fog during the day.

All of this appears to convenient in getting rid of a Polish government which Mr. Obama cast to the wind and the Russians were pointing nuclear missiles at.

Could this be done by the Russian government? Yes.

Does this belong in the realm of the FBI, Polish security, French intelligence and British MI5? Most definitely.

Let this be investigated and not trusted to Russian mechanics servicing Polish Presidential planes and then Putin pointing fingers at Poles as he makes Obama buddies with the Polish opposition days before this happens.


Russia blames the Poles
Posted by Lame Cherry at 11:17 AM