The FBI Pick Up Killer Assassins 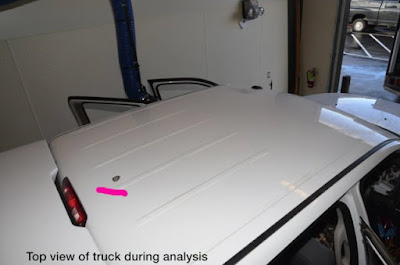 As I surf the internet, one glaring factor comes out to me time and again, and that is none of you have a modicum of comprehension of factoring situations out or a basic understanding of forensic science.

What this article is about, is what is frustrating to me, as I see Deschutes County present damning evidence against the FBI in Oregon, concerning the murder of LaVoy Finicum, and no one has a clue to what is being presented.
I will assume that Deschutes County was displeased that Special Agent Gregory Bretzing was running horrendous psychological operations, and the appointed Governor of Oregon was calling for a blood bath, and it happened in their beautiful county where John Wayne once filmed. No one likes being manipulated and having murders committed on their soil, and then being lied to about it.
That is exactly what the "piss on you" attitude was of the FBI in lying to the "hicks from Oregon" in thinking they were going to get away with their shooting AT the Finicum vehicle, in order to trigger a flight and firefight, so the Oregon State Police would murder everyone, and the FBI's hands would be clean.

That is the essence of the operation in Oregon. This was not law enforcement. This was a mirror image of the Little Big Horn in which powerful people used the Indian Ring police state to retaliate on General George Custer, and suckered the Indians into doing the assassination.

What the focus is on this, is the first shot fired by the FBI assassin squad. I am not going to call them a Hostage Rescue Team, because that demeans those officers. What the FBI snipers were involved with at Oregon was pure murder, and I know this by all of the ballistic evidence, as the bullets tell the tale.

What I desire to focus upon is the one shot in the roof of LaVoy Finicum's pickup, as this was a deliberate shot not at Mr. Finicum.

By watching the Shawna Cox iphone recording, one can deduce the FBI was shooting a 300 Winchester Magnum cartridge with a full metal or armour piercing load, as it shot through the metal and blew out the driver side rear window with explosive force.

In back engineering of this shot we know it came from above. We know the angle and we know the position of the sniper assassin. That is what is of interest.

This assassin for the FBI Oregon office, was either on an elevate platform or was airborn. By the angle he was quite high, and deliberately stationed so when the Finicum pick up stopped in front of the roadblock as was intended, that his field of fire would allow a kill shot at all occupants in the vehicle at a 15 to 20 degree angle.
You will notice in the Deschutes County release of information, there was not any release of the FBI assassin data deliberately.

Now some background so you will comprehend what I am going to explain.

These snipers fire hundreds if not a thousand rounds of ammunition through their rifles. In most cases an armourer cares for these rifles to make certain they are clean and functional.
These snipers fire in daylight, darkness, rain, snow, cold, heat, humidity, arid, in every position, moving and stationary. They fire at extreme angles in elevation and at normal angles.
When they set up on a location, they know exactly the distance and how that bullet will perform, from all match grade select ammunition. 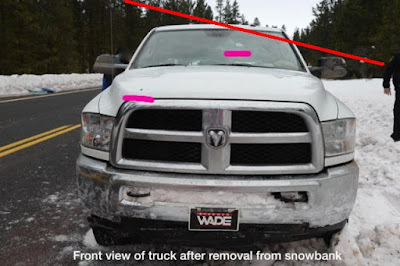 I will expand on the elevated shooting, so you will understand the shot entering the Finicum pickup.

When you are elevated, it is like "raising your sights", so that your bullet if you aim at what you are shooting at, will actually shoot over your target. Water has a like refracting ability, but different.
So a sniper shooting at LaVoy Finicum's brain from an elevated position, would either have to dial in a scope so it dropped the shot lower to hit his skull, or by practice the sniper would have to depending on elevation or distance, have to shoot at Mr. Finicum's shoulder to strike him in the head.

Now return to that hole in the LaVoy Finicum vehicle. It is almost dead center in the rear seat region. If this was a nimrod it could be thought that perhaps the shooter was aiming in the passenger rear window and elevation raised it. Meaning the target was Shawna Cox.
This though was an experienced sniper, who also would have known that braining Shawna Cox would most certainly make a secondary kill shot on the little girl in that pick up too, as full metal jacket bullets do not stop in bodies from 300 Winchester Magnum.

As these were FBI professionals, I will expect them to know exactly who and what they were shooting at. That means there were no fliers in bad cartridges or a mistake in elevation, as sometimes snipers are known to set up on a location in a roadblock and actually sight in for a certain kill range to leave nothing to chance.
So that means this FBI sniper deliberately pumped in a magnum load to the roof of this pickup, in the passenger area, which nearly missed the little girl in the middle and came very close to taking the head off of Ryan Payne.

Logic dictates  that this was a murderous spray shot, whose first intention was to trigger a fight or flight reaction from the three people in the Finicum pickup, or cause Mr. Finicum to draw a weapon. The net result is then that we know 5 FBI elite snipers were there, and every person would have been dead in 5 seconds.

There was a second shot fired which did not hit the pickup, nor Mr. Finicum and unlike the 9 mm handgun shots which were heard clearly as well as the canister shots on Shawn Cox's phone, this 300 Winchester Magnum could have had a silencer which could be heard, and which the bullet when it passed objects or struck objects would "crack" in sound as was heard in the pickup with the window blowing out.
The point in this is, silencer or not, LaVoy Finicum knew he had shots falling in his direction, and as we still do not know where the second FBI sniper shot went, it is a reality it was designed to get someone to shoot. Meaning, the FBI sniper either shot in the vicinity of the Oregon State Police to get them to open up again, or the sniper shot close to LaVoy Finicum with his hands raised in order to get him to go for a weapon, if he indeed had one, and that Ruger was not planted later.

What the damning thing is in this FBI sniper shooting, is in extreme prejudice the Oregon State Police can justify their first shots at the vehicle in deadly force, as the vehicle had left a traffic stop. But in stating that, the Finicum pickup was STOPPED and stuck in the snow. Mr. Finicum was out of the pick up with his hands raised, and that is when the FBI sniper shot into the passenger area of a vehicle in an event of reckless homicide, meant to only produce a fire fight, which the Finicum group had shown not any aggression for.

That is why this FBI sniper is particularly heinous in what was done, as the intent can be discerned in this deliberate act. It was absolutely known that there were two women in that vehicle as passengers and that is what the FBI sniper fired at in order to gain a protection trigger from the males.

Ryan Payne is heard asking about ONE GUN as in "Where is the gun?", which is logically the 6 shot revolver in 38 caliber under the seat, but no one produces that gun.
Shawna Cox is heard stating that she has to keep the camera on LaVoy Finicum, as they knew he was a probable target.
LaVoy Finicum kept telling the police to put the laser between his eyes as the blood bath was going to be on law enforcement's hands, because LaVoy Finicum and no one in that vehicle was going to give the police state any excuse to murder them.

If you listen to the recording, you can hear Shawna Cox, LaVoy Finicum and Ryan Payne as calm. These people were not emotional or out of control. The little girl rightly lost it after the window shattered in shock effect as intended, and the murder of LaVoy Finicum, but after settling down, she did very well too.
The point being the FBI tried to trigger these people, and they did not fight or flight. LaVoy Finicum instead emerged to draw fire from the women, and it was LaVoy Finicum who crashed his pick up to keep from running over an FBI agent.

That bullet hole in the roof of the Finicum pickup is thee most unprofessional, unAmerican and unhuman of shots. It was deliberate. It was deliberately placed and it was put there to cause a fire fight which would have put Oregon State Police into jeopardy and the Finicum group all in the morgue.

The assassin squad of the FBI was perfectly safe in their body armour, and at least 100 yards away in an elevated position. One does not deploy long range sniper magnum rounds at close range.