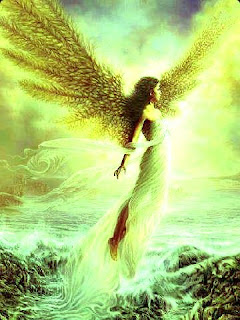 I wanted to share this from Tuesday evening in what appeared over the east coast of the United States as HAARP looks like it generated a sickly green death angel.

I have been watching this manifestation the past few days and it reminded me of the geysers which HAARP was generating last year. Notice that the Canadian border has a blocking force on it, and this huge amount of energy out of Texas looks like a fire hydrant at the top in a water plume.

This must have something to do with the cartel members in their spheres of control, in whoever is in charge of Canada, none of these storms are allowed to cross the border. It is not that Quebec does not get horrid weather, but these storm fronts always follow the Canuck line.


On Tuesday morning the body and the wings like a water plume were visible, but by Tuesday night the head appeared on this death angel. I feel bad for the people who have been under this shit for weeks, as it just keeps generating horrendous weather over the same slots. Of course if the Dakotas were not constantly being hosed down by super cold upper atmospheric weather in the blizzards there in Dakota Dreadnaughts, the Mississippi East of America would not be getting this pounding every day.
To put it simply, if Fargo was 50 degrees like Denver is, these hydrants would not appear, because it requires that cold dry air to trigger them. What you are witnessing is a constant squall line that smashes into Michigan to New York. The reason Minnesota is in this one with Iowa, is the Dakotas had a Dreadnaught yesterday which I was told was a real pisser in chaff snow that blew like the White Sands of New Mexico.

There is not any weather in the United States as there is not an economy. It is all false generated. I have witnessed snow dumps appearing out of nowhere, In the above, you can see snow appear over western Kansas which is impossible, and yet in HAARP localized these  things manifest to bring problems to the local populations.

You can see on the west coast this damning up of moisture and it is not the Cascades doing this. Moisture pockets just form and then move inland. I have noted moisture just evaporating in these things. Last week a river was shot out of California into the Dakotas as last year which buried that region again, and I have seen these blobs of moisture just hang there for days and nothing happens.
This group in California is supposed to in in the Dakotas on Saturday for a slight snow dump. What is 3 inches more when they are under 3 feet in some locations.

I keep hoping enough exposure will make the Weather Mods nervous and they will have to stop these weather terror bombs from going off, but it is supposed to be another plunge over the central USA in the coming week. I do not know if they have run out of cold as the weather will "only" be 8 to 15 below zero, but that is not the 40 below that northern Minnesota and North Dakota had a few weeks ago.
Again, the temperatures in this region should be in the high 20's with days in the high 30's at this point. Except for 4 days in early January, this region has not seen temperatures above freezing in almost 3 months. It started with that fake Greenland cold, then moved to upper atmosphere dumps of cold, then the "polar vortex", then Arctic cold and lastly these Saskatchewan upper atmosphere cold dumps of air to keep generating this HAARP pattern.

Anyway I have had a hard ass two days on a year of impossible shit going on here. I tried to sleep and a marketer woke me up calling. I should post on that shit too as that is not by accident.