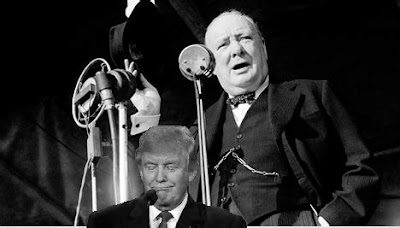 The Americans will always be fodder for British Banking
just like the Jews were expendable for the finance of the Elders.
Greed is their soul.

In 1938, Winston Churchill could have inherited the appeasement of Prime Minister Neville Chamberlain in handing Slavic nations over to Adolf Hitler, in producing a policy of mutual defense of Western Christianity against the Soviet communist hordes of Moscow, but instead of siding with his Saxon kindred  again, instead as in World War I, chose to make war against the more progressive German competitor which brought about Franklin Roosevelt's globalist war for finance domination of the masses.

The world  has now been pushed to the threshold again as the Donald Trump of 2016 has become the Hillary Clinton of 2019 AD in the year of our Lord in effervescent bubbling of not only making worse enemies of Russia, China and Iran, but moving onto attack pro American allies.
In what has emerged from the Reagan Euphoria of  the liberation of Eastern Europe, has from HW Bush looting Slavic peoples, Clinton bombing Slavic peoples. W.  Bush antagonizing the Russians, Birther Hussein allowing the Polish nationalist leadership to be wiped out as he installed John the hero McCain Nazis in Ukraine, has devolved to Donald Trump bitch slapping legitimate nationalist leaders as illegitimate.

What was the Ugly Briton of 1938 has now become Edward Lansdale's Ugly American in Eastern and Western Europe. The American policy is to Balkanize or slip united Europe to dominate her, but the reality is these attacks on Slavic Peoples will produce one of two results.

First result it will so weaken Europe  that Russian will move to annex eastern Europe.

Second result it will so weaken Europa that Sebastian Kurz will weld together a super state of military, resources, and finance which will obliterate the need for a United States petro dollar in the world.


America will become a pasture where the genocided America race will be replaced by a tawny cloth of the land of two legged Jesuit vermin, answering to Melania Trump's Vatican, and this cloth of the land will graze like a cancer upon America, until it resembles  the deserts of the once productive Holy Land.

The absolute abuse which Secretary of State Mike Pompeo unleashed on Hungarians was vintage Winston Churchill as suddenly the delicious chocolate cake China and my friend Putin has become the nemesis to the world and it all centers on Hungary.

What Hungary scolded the Americans over is posted below, what Hungary did not state is that Hungary does not have a petro dollar to rob  poor nations like Hungary with in expensive American socialist debt in the trillions. Hungary is a nation which must survive in a real world, with real trade, and two nations Hungary must trade with are Russian and China as they are the Eurasian world.

Szijjarto retorted to Pompeo's lecturing that "the world is not going to be a better place if some countries spend their time intervening in the internal political affairs of other countries." He insisted that Budapest can have transparent relations with Moscow and Beijing and the West, and said it was an "enormous hypocrisy" that Hungary is singled out for its ties with Moscow.

None of this Big Energy Saudi Muslim policy set by American Jewish banking set well with the Hungarians and they were furious at the Ugly Americans who they used to adore. Yes for a review in this, Saudi Arabia lent money for fracking in the United States to American companies, who are in massive debt and they are then by Trump policy  robbing Americans BY SELLING THE AMERICANS THEIR OWN OIL AND GAS, and attempting to blackmail Europe into buying expensive American energy while Russian energy is cheap and dependable, not an ocean away.

US State Secretary Mike Pompeo's quest to scare Hungary away from dealing with Russia and China appears to have turned sour, as Budapest said it's fed up with lectures about its foreign policy.

I keep returning to the work of Australasian David John Oates in the waning years of image Obama, in his finding comments about Europe as scorched earth from Birther Hussein, Jeb Bush and Hillary Clinton. I return you to the opening statement in this article that what Donald Trump says is not what Donald Trump is engaging in. Everything about American policy is equal to British policy of 1938 to destabilize Europe for a war. The British were attempting to unload their empire on Americans, and accomplished this with great suffering to the British colonial remnant. America in an attempt to keep this plantation is engaged on a policy with this President's name on it in nationalism, to create an environment where the Great Eurasian War is in the process of being generated.

In the several years study of the world war, based from the German experience in Russia, only this blog has revealed that the coming policy is not to attack Russia, but to draw the bear out of her den. For if mother Russia remains in her den, she kills all who enter that expanse in the Rasputitsa or Russian mud twice a year. The Bavarian Seers foresaw a time when the Balkans again would trigger a global war with Russian invading Europe, and America using a hybrid biological, chemical and nuclear dust to slaughter the Russians in their tanks. Think of it as an Ebola Cancer which rots the flesh off the living human in a ghastly death.

It should be evident now by the evidence that even the tard can see what seemed impossible in what is now being engaged in by this attack upon the Hungarian People. This is a prelude to war and instability which leads to war and that is the only reason to embark upon this policy, and you will notice not one democrat is against this, as this is the cartel policy. Hillary Clinton or Jeb Bush would  both be embarking on this same scorched earth diplomacy.

While Pompeo Pouts In Poland, Putin Pushes Peace In Syria

Pence Scolds Nations "for undermining the drive for war with ...


This is the reset. Donald Trump just signed amnesty and the further looting of America against his voter's will. His first act was to begin stockpiling crucial American war supplies in steel. Upon the Bush and Obama doctrine the United States is in process of dial a nukes which have only one purpose and that is for battlefield use and not ICBM deployment. One requires this type of firepower to obliterate 200 million men armies which Asia produced.

The preparation of the battle zone is coming to a completion. The Prague field is where the first stand will take place, and the Slavs are to be fodder for this epic line battle, where the Americans are now arming the Slavs to use up a portion of the Russian armament in a pitched battle which the Slavs will lose, because they will not be able to hold out a week, and it will require a year for the United States to produce a conventional military on the Churchill timetable.


The trip looks like a massive lobbying campaign aimed at advancing the interests of Washington as well as those of the all-powerful US military industrial complex. Budapest has pledged an unspecified deal to buy more US-made weapons.
Pompeo will then go to Slovakia, which recently "selected the F-16 as its next generation fighter." He will also visit Poland, where he will, among other events, take part in a conference on the Middle East, an effort to build a coalition against Iran.


These weapons will not thwart the advanced  Russian technology as the F 16 is a 1970's era aircraft. The end point is in this from a European standpoint, is that Europe must gather in the central and east behind Chancellor Sebastian Kurz, to keep a Balkan war from beginning with Russia. In Putin Kurz alliance, the majority of Europe would then be spared as it would have been if Stalin was not the same internationalist as FDR was.

If America then desires a pitched battle, it seems the Poles in their intrigue with the English would be the zones for battle, and limited there, if France can come to her senses and remove by ballot Emanuel Macron who has a passion for slaughtering innocent Russians as he proved in the Mediterranean.


The United States policy must be peace with Russia and cooperation with Chancellor Sebastian Kurz. Gaining that, China will implode upon herself in population and resources to become a managed three state democratic national structure free of nuclear weapons and projections of power.

Once again, this blog is about peace, and if you do not like the projected outcome of actions which the American White House is engaged in, it is not my responsibility for the sun  setting. Fracture Europe as is deliberately being accomplished and war will follow as it did under British and French intrigue thrice before, just as dropping an apple, it will always fall to the ground.