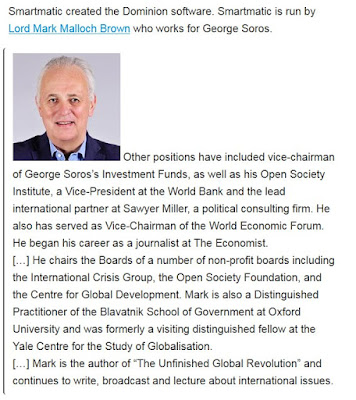 Dominion Ownership was elusive and now seems
like Communist China owns them!

What do you get when you cross an MI6 frontman, Lord Malloch Brown, Mosaad George Soros investments, with British Birther Obama and Islamocommunist John Brennan, the George HW Bush family, and their Peking money laundering girls?

You get the overthrow of the United States elections in 2020, twenty years really as the Bush family have been practicing election fraud on small and large scale for decades.

Just so you understand this, Queen Elizabeth in her Rhodes Round Table, acquired the Venezuelan fascist vote hacking machinery, and backed it with George Soros money, set it up in Justin Trudeau's Canada (Trudeau stole the election there) to re establish British Dominion over the world.

You are going to get the joke in this in the next few Lame Cherry exclusive paragraphs, but it just shows you how this group has no national loyalty and is still the backstabbing dope running slave traders they were in past centuries selling each of us as threads of the cloth of the land.

Who owns Dominion voting systems? None other than the People's Liberation Army of communist China. Peking counted all those crooked votes for Pedo Joe Biden, as Biden is Peking's man in America.

COFCO Group is a state owned enterprise under the direct supervision of the SASAC.

The tracking of this, including patents out of British Hong Kong, are the complete control of Dominion, through a Swiss banking front, owned by the PLA.

The information source of origination came well-documented from the U.S. federal government as mentioned by the United States Patent and Trademark Office ( USPTO ), and elsewhere, including:

The ‘Security Agreement’ pertaining to all Intellectual Property Rights pursuant to those 18 Patents listed in ‘Schedule A’ was signed by, Michael McGee, Authorized Signor on behalf of DOMINION VOTING SYSTEM INCORPORATED ( DVS ).

What you are missing in this is, MI6, Mosaad, Bush fam CIA and Obama, built this election fraud system, installed it across America, ran it out of Scytl and a ghost CIA server in Frankfurt Germany, but on October 8th, 2020 AD in the year of our Lord, UNLOADED THIS VOTE HACKING PLATFORM, infused with CIA Hammer and Scorecard, to the communist Chinese for 400 million dollars, after an initial investment under Obama Inc for 200 million dollars.

Remember Bush fam built communist China, that the British had run a monopoly on in trade through their ports of Hong Kong. They suckered Peking to give them 200 million in finance, then just before the election, unloaded Dominion on these idiot Chicoms for almost half a billion dollars.

Who is getting blamed? Those moron mullahs of Iran, Putin's Moscow boys and the Chicoms, as was intended all along. The original group sowed the chaos and the suckers are getting blamed.

@LLinWood
PATRIOT ALERT: Information being received NOW that Communist China purchased Dominion Voting in October 8 for $400M. Efforts underway to verify. If true, this confirms other evidence that Communists intend to overthrow our government to get our precious land. NOT ON OUR WATCH.
10:51 AM · Dec 1, 2020·Twitter for iPhone

Above you are reading something called EVIDENCE, something the FBI in Christopher Wray can not find. Below you will read links of EVIDENCE in DOJ William Barr can not find either in all of this international criminal election fraud.

Joe Biden is a creature of absolutely no moral character. He is equal to the conspirators above, as literally any of you reading this would be sick to your stomachs if you had just taken part in an election which was fraud, that the people did not want you, did not vote for you, and the only reason you are where you are, is that you are a fraud and the criminals who treat humans like animals to be bartered and slaughtered, stole an election, not for you, but to destroy America first and then the world.

Peking, just engaged in an act of war against the United States. So you understand this, the international cartel behind this, just created the Great Eurasian War scenario, of Russia, Iran and China, in acts of war, on top of the biological act of war, which Birther Hussein Obama engaged in, in building a biological warfare lab in Wuhan China.