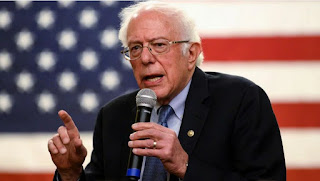 For a Marxist who used to write rape fantasies back in the day, I actually like Bernie Sanders.........even though he twice was the Mockingbird stooge to fall down before Hillary Clinton that got fellow Jew, Seth Rich murdered over revealing Sanders part in the coup against leftists, and then he did the same thing again with Biden in 2020........all the same I like the guy, mostly because CIA asset Alexandria Ocasio Cortez hangs around him.

Anyway Bernie was going prophetic and was actually historically accurate about when democrats control the Congress and the White House, America rejects them. Granted what America rejects them for is more GOPliter liberals who vote for the same socialism, sabotage a guy like Don Trump and then prosecute their own voters for standing around while others Wilded the Capitol.

There are realities in Bernie's world though about losing in 2022 which do not add up.

Sanders predicted the Democratic Party will be "wiped out" in the 2022 midterm elections if they squander their opportunity to improve American lives.

"Given all that we face, now is not the time to think small. It is time to think big, very big," Sanders said on Thursday, according to McClatchy reporter Francesca Chambers.

"With Joe Biden as president and Democrats controlling the House and Senate for the first time since 2010, we will be judged on what we deliver for the American people in their time of need. The people want action, not excuses," Sanders explained.

"And let me be very clear. I have zero doubt that unless we significantly improve the lives of the American people this year, Democrats will get wiped out in the 2022 midterm elections," Sanders predicted. "That is what happened when Democrats had the House, the Senate and the presidency under Bill Clinton in 1994 and that is what happened under Barack Obama in 2010."

First, there is the reality that Joe Biden with foreign regimes stole the 2020 election.

Second, there is the reality that Joe Biden is going to add 22 million foreign vermin as voters.

Given that reality, Bernie Sanders should rest in peace, as no one on the right is going to vote for those Pence Whigs in 2022, no more than they voted for that shit, when Jeb loaded the field with strawmen so he could win, but Trump kicked his ass with Shin Bet and the DIA, for what was really not an ass kicking but a punting. Trump was put into office over Obama Bush election fraud, so the nationalist movement would riot and be named terrorists by Biden Organic Terrorism and destroy the right wing in America.

So Third, no one is voting for Mitch Connell or his sock puppet John Thune. It is hard for democrats to lose an election when the Republicans are done with the GOPliters.

That is not to take Sanders lightly in this. The reality is the same folks who installed and uninstalled Trump, can just as easily flip Congress back to McConnellites in vote fraud favoring them.

Look at the Biden victories so far. Biden has wiped out Trump executive orders, so America is back to Obama Super Depression and Obama dictatorship. The result is gas at the pumps shot up in price immediately, which means inflation is setting in, as Biden spends more money, shuts America back down.......that 100 day mask thing is going to shave 20% off of the US economy in people will stop traveling for business. Furthermore, we have the reality that Joe Biden keeps telling everyone that the worst death tolls are still to come. Fear keeps people from working, keeps people from spending, so the US economy in what is left of it will tank, just like under Obama with his Obamacare  rationed death.

So Bernie wants more Big Government. I have no idea what else he can get, unless he hires more law enforcement so Americans have two FBI agents spying on them, instead of one. Seriously, the age of Big Government has come and gone, all that is left is Bernie to confiscate everything from farmland to children for pedophiles.......if that is what Bernie is saying, then sure that can happen, but it is not going to cost anything to seize land and kids.

So you keep yourselves from going over the abyss. The only way that 2022 has the GOPliters in power, is because it is cover for the 1%, and you are supposed to fall for the ruse that voting still works, and that the GOP won with 22 million more votes for democrats in 2022.

So if this is Bernie's crystal ball, you have already been told the scam, and Steve Bannon is pushing Trump in 2024, which if Trump is not in jail and bankrupted, you know he got a deal from Biden and Trump is now in on the game too. I have stated that I have no interest in voting for anything Trump again. Trump proved he could throw an election and abandon his voters, he had called out. Women were beaten, arrested and murdered at the Capitol, and I'm not looking for a repeat of following something like that again, no matter if they steal the election for him over Kamala Harris.

I figure war is coming sooner than later. China is already grabbing Biden by the nuts and intimidating him. NATO is getting Biden on his knees for a war with Russia, so with the wonderful DIA getting it's world war, free elections over, I really at this point do not like Bernie Sanders, in spite of his being a literorica pervert that AOC makes excuses for.

Forget the federal, it will implode on it's own. You organize and get yourself elected in taking over your towns and counties, and pass laws which state that no federal officer or project can operate in your community without the all the Sheriff's and Mayors notified and signing off for a two week expiration window.

You care about your water, your lands, your places to dump garbage, not being fined for driving to fund your local whorehouses, and not being impoverished on taxes. Your answer to tax the hell out of the Mexican employing businesses, tax the Mexicans and whatever else Lutheran Social Services and Catholic Charities dumped into your communities to turn it communist, and that is how you start winning and not be bothered by the propaganda coming out of Bernie Sander's mouth.

Democrats might not get elections stolen for them and Mitch McConnell stolen for him, but elections do not matter shit any more on the national. So you get your paper ballots, VOTER ID, and you take control of what matters to you, as I doubt China or Russia re going to nuke your middle of nowhere. That is what they will do to the metro city states which overthrew America.

Just don't fall for this shit, as it is meant to be easy and make you Obama settle in again, to the American Genocide.