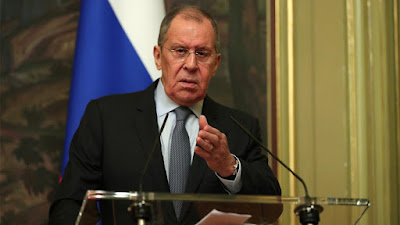 As the FBI continues to hunt down Americans for the 1% and now has moved to selling faux bombs to them to frame them, this blog warned that the Russians would exploit this schism, and Moscow is now leveraging this in an attempt to disrupt the global machinations of Bidencon.

The Russians suffered from this the last time the Americans went woke in sponsoring Chechen terrorists to slaughter Russians. So they have reason to be concerned about international wokeism.

There is a coming global cultural revolution or genocide war of tans against whites, out of the Obama era, and what is taking out Americans, will take out Russians and Europeans.

It is in Russia's interests to back 100 million armed Americans, in order to protect their own White populations. We are witnessing the genesis of global race wars, but this is intended by the 1% to be fought in Europe to wipe out the Slavic Peoples.

Russian Foreign Minister Sergei Lavrov today warned of wave of anti-white racism in the United States is building. He made the comments on national television with during a live interview.

“We were pioneers of the movement promoting equal rights of people of any skin color,” he said.

But Lavrov stressed it was important “not to switch to the other extreme which we saw during the ‘BLM’ (Black Lives Matter) events and the aggression against white people, white U.S. citizens.”

Lavrov accused the United States of seeking to spread what he called “a cultural revolution” around the world, reported AFP.

I have been proven right again. The FBI knows all of this, but the 1% believes they will succeed in their agenda. So this is not a surprise to those behind this, as this is by design. The FBI is a police state which is expendable in numbers as they are conditioned to believe it is "the FBI against those Americans", and a few dead agents simply binds them together more and spurs them on for the 1% agenda, as their superiors are behind the high walls, in dealing with those Americans.

The Russians though comprehend what wokeism is and why it is in their interest that those Americans rise up and fracture the federal. Everything from South Dakota's whatever, Florida's whatever, Texas' whatever as they become  targets for the federal and begin the process of fracturing the United States........again by design with China cracking the Tree of Liberty and Russia to make kindling out of that tree.

Americans are being exploited by every group on the planet, and that includes the 1% inside America.