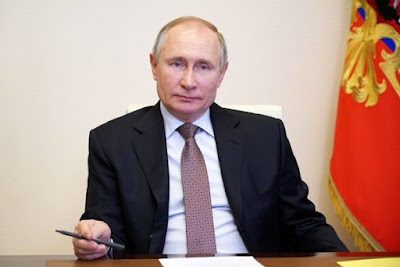 I was surprised by a photo release of President Vladimir Putin, because the first time in the decades of his public persona, he looks old. Putin has not changed since the KGB had him bump into Ronald Reagan in Moscow in the late 1980's, but in 2021 AD in the year of our Lord is is beginning to look old.

His skin is sagging, he had put on weight, his eyes are dull, hair greying, and he appears to have a slight water build up, meaning the beginnings of heart or kidney problems. None of this is to celebrate as Pedo Joe Biden stokes the Obama War in Ukraine, because it will mean that Vladimir Putin will begin deferring more power to the military and intelligence.

Vladimir Putin can not lose Crimea or appear weak in Ukraine, or he will lose his head. This does not mean a coup by the military or FSB, but it would mean behind the scenes power, as what installed Biden in the 1% with the trolls at the Pentagon, DIA, CIA and FBI really in charge as the NSA network blunders along. This is a disaster for America, but for Russia it will point to more nefarious and militant actions, unlike the well crafted diplomatic actions of President Putin. This is not to state that Russia will suddenly become the Soviet Union, but it is to point out that use of force will be more evident, including backing adversaries in the American hemisphere against America again.

The indication of the FSB and GRU asserting themselves was the tucking tail and running of Joe Biden and his Pentagon Navy, after threatening Moscow with entry into the Black Sea, with NATO, suddenly Biden stood down. The fact is two things happened, Biden blinked and Brussels blinked. Provoking Russia to a military response in Ukraine exposes NATO weakness at it's fat old European pedo soldier worst. Without a massive war, in which Russia will reach the Rhine in weeks after obliterating the eastern frontal lines, Europe will have to fight back with WMD's from the Rhine to stop Russia.
While London and Obama New York relish  the idea of using Eastern European Slavs as fodder and turning their nations into death zones, Europeans view their eastern workers and trading partners as necessary. Brussels and Vienna are not going to back a war in US gunboat diplomacy begun in Crimea. NATO and Biden just informed not Vladimir Putin, but the Russian intelligence and military that they will not fight. That message resonated in Peking over Taiwan.

The Lame Cherry is not stating that Putin lost control. That is not what took place. He is not as weak as Birther Hussein Obama when John McCain seized control of military policy in the Mideast and Ukraine, but Mr. Putin understands he can not appear weak over Ukraine and never lose Crimea. That means the Russian military and intelligence are going to become more active in protecting that interest as the line has been drawn in the sand.

The Kremlin knows the American political system is finished. They know the FBI is hunting down 100 million Americans and making criminals of them. They know what the 1% and China unleashed in the Coronavirus. They know Biden is not capable nor is Harris. They know the US economy is a house of cards. They know America is incapable of thwarting Russian defenses in conventional and WMD's.

The politicians, the generals the directors all know they have a more liberal hand to draw events to their own dictates. This is the entire process surrounding Vladimir Putin and the system wants Mr. Putin to remain in power as it is mutually beneficial. The whispers of the old empire, not so much Soviet, but of a greater Russia are manifesting. While it is a cat and mouse game with the treacherous Chinese, in China desires Russia to die for Chinese gains, and Russia desires Chinese fronts to tie up America for Russia's uncompromised  advancement, the fact is both will move, with China being the most exposed, and Russia will always keep their battlefields secure and neat as they advance.

America Soldiers in front positions will die as intended, in order to rally political support for this Biden war. In assessing this, I do not believe that the 100 million hunted Americans by the FBI and Bidencon criminalizing and terrorizing Americans over guns and vaxes, will be drawn in to fighting this Obama war. The US military is at war with itself in purging Americans. America is facing the same lackluster response of Vietnam and that does not win wars, as people just fire off their weapons and go home and run their deployment out.

So America proper is not going to support this. Moscow and Peking do not need an American police state pointing weapons at them, so if it came to defeat, Moscow and Peking have enough ethnic loyalists to police the population and enough military governors that Pedo Joe or Director Wray will be removed, just like Bill Gates will only be around long enough like the other trolls fronting for the 1% until the Chinese and Russian bring in their masters to crack the whip.

This situation is what it is. It was deliberately constructed, and there are no offerings in how to rectify it as the FBI enjoys hunting down Americans too much in bullying them, politicals and tycoons all think they are immune to the effects of war, and the police state has concluded it has enough firepower to stop the Eurasians in this great war.

The fact is without a Donald Trump sucking the life out of the energy pool, the great leaders are all in Eurasia. They are the power and an anti Christ in Europe should arise to join in this end times energy surge. America has nothing for leadership and will have nothing but appointees who are weak, as that is why they will be appointed. America is without leadership, and that means without Jesus. America has no industry and rots from Mexican slave labor and worthless Chinese parts as the Jew controls commerce and the police state is at war to erase the Protestants. That rot will bring defeat and this will be America's epitaph. 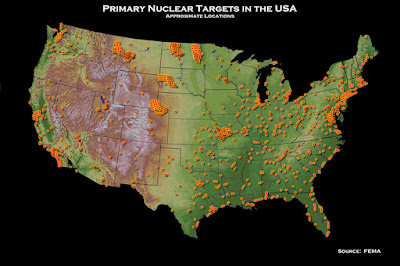 George Washington stated he was shown in his epic vision that America would begin again in cottages and cottage industries as the world assembled against her. Just remember that in the above, that Russia, China and Iran have hydrogen bombs. Hydrogen bombs convert cobalt which is in all your wonderful batteries and stockpiles across America into a death poison which radiates for 5 years, killing every living blooded creature.

An aging Putin is nothing to celebrate, no more than a feeble Biden and incompetent Harris propped up by the woke police state is nothing which will bring but an end to civilization by design as we experienced it.