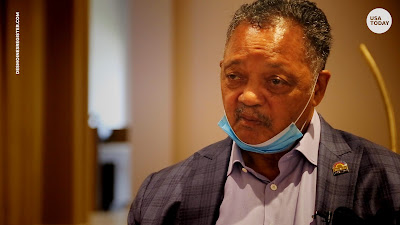 It is cold in Minnesota for a Black man. Why doesn't Obama get his ass over here?

You read here the Viking's on ground reporting in Minnesota of the mayhem there in the helicopters come out at 8 pm to watch the 1% ignite the Twin Cities, and you now see Maxine Waters getting National Guardsters shot as Jesse Jackson was rolled out for his whore's wage as image Obama needs a skin change before he trolls out of the mansion lab, which means this is jury intimidation and the jury is logically not going to convict Derek Chauvin as the testimony stated he followed training. he did not abuse George Floyd and Floyd died of a dope overdose and coof, not anything Chauvin did.

What I desired to share in this update in I was talking with a friend yesterday whose business partner's daughter lives in the Twin Cities. She phoned home, and said she is coming home for 3 weeks, as she lives in a high rise and if that mob starts burning down apartments allot of people are going to get killed.

Her area is not in the inferno zone when this started, but it is progressing outward.

TC is going to riot as the Afroids are paid to riot by Buffett and Soros. This girl who is leaving for a few weeks, was describing watching from her window the breaking into liquor stores and their being looted. There is not any law or order. It is open chaos, and the only way to send the message in this Obama Marxism is to unleash, and the way to unleash is to follow the law and acquit Derek Chauvin so all of this staged violence can unleash and burn more of America down.