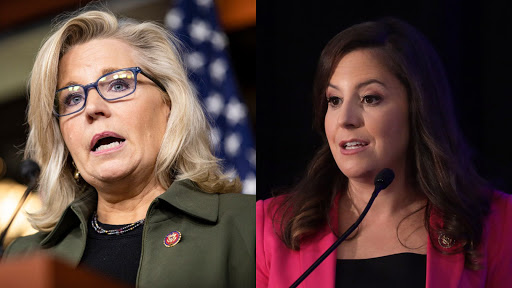 It is a shame that "like father like daughter" does not pertain to Liz Cheney, the squatter in Wyoming politics, in this woman has now brought utter ruin to the Cheney legacy, of Mr and Mrs Cheney who accomplished so much for the American Right.

The Lame Cherry agrees that Liz Cheney has woke, to the Mitt Romney and Bush fam extremism. The strange part in this is, that Bush fam was destroyed by Jeb and George, who have ruined Jorge Bush's political future, while in the Cheney household it is that sodomite daughter and now Liz Cheney suffering from Trump Derangement Syndrome which has ended the Cheney name.

As she desires like most of the GOPliters nothing to do with the Tea Party turned MAGA, it is time for Ms. Cheney to be ousted as she does not serve the Republican Party nor can she serve this party. The fact is, there is more reason in Chuck Schumer and Alexandria Ocasio Cortez to the Republican Party than there is from Liz Cheney.

Whether she like John Thune and Dusty Johnson of South Dakota, turns her Noemland over to democrats remains to be seen, as all of these GOPliters have deliberately placed Republicanism in jeopardy by mocking their voters, allowing them to be hunted down by the FBI and relishing in fist bumps with election thief Joe Biden. The troubling part of this is in 1864, Abraham Lincoln had his own nutty and delusional party members, but for the good of America, they backed  Lincoln in his overreaches, but not this group of McConnellites who have gone with the very antagonists to America. America has been turned over to the same radical nuts which backed General McClellan. McClellan was an honest democrat and a fine man, but with the Pedo Joe in the White House with his illegal Kamala Harris who can not be President as she is not native born, the lunatic left fringe is now in charge of the United States.

These are not communists nor nazis. They are feudal corporatists whose ideology is board room control in absolutism, treating humans like sheep on King George's farm. They may spout giveaways, but their entire focus is using debt, inflation and erasure of Americans, enforced by the police state to serve the 1% in their quest for immortal control.

Ms. Cheney has played her part for her pound of flesh and 30 pieces of silver. She has performed well for the 1%, but her time has come to an end in politics. She has no party. She has no appeal to the left. She is Mitt  Mormon Romney and George W. Bush, a big portfolio, but no audience which wants to listen to their lies anymore.

She can now do what these portfolio prostitutes do when they fail at usurping  the bleaters in politics, and being Jeb Bush, someone who is a man without a country, as he helped erase the country.

It is time for others to replace Liz Cheney who can rally support while America is covered up with the sediments of Obamaism in the abyss, to promise more lies, more elections and more things to cling on to as the new QANON of the DIA CIA. The Cheney Thune caste though hate the party they were elected by and with venom do all they can to destroy what is thee American Dream. They have sold their souls and now are the savage cat eating their own.

Liz Cheney has not one word of sympathy for Americans set up on January 6th. She shares a great deal more with Donald Trump than she cares to admit. The only difference between them is one says the election was stolen honestly, and the other says the election was stolen crookedly. Other than that, they are both billionaires, both abandoned the people who trusted them, and are now both jockeying for the 1% in their roles of fragment couch leadership as the ivory tower collapses.

I'm thankful for what Mr. and Mrs. Cheney did for America, to the point where they woke and chose sodomy, but their daughter has ruined all of that, as the biggest wound in America began with the instillation of these Jerry Ford people and the patrician legacy of Prescott Bush bringing ruin to America.

As we look back, the fault of this lies with Ronald Reagan. He chose George HW Bush as his Vice President, and it almost got him murdered. He then was hands off in not promoting Senator Paul Laxalt to be the next President, which ushered in the kinder and gentler wokeism of Bush extremism.

If only eh? But the dice was cast and the genocide mistake was made and most Americans now would rather have politicians lying to them in stating they support them, than the Liz Cheney types who is calling you a son of a bitch.

In that democrats are more fortunate as AOC pretends to love her people, if only the tan skin ones.

Republicans should not have to have elections to get rid of these trolls. If these trolls had any honor, several dozen of them would resign and allow the Republican Governors to replace this wokesters with Republicans who are genuine.

It is time though for Liz Cheney to be scapegoated so we can all be told how nice the crematoriums are compared to summer.