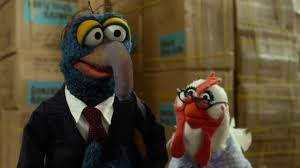 I was thinking of that happy Muppet Show song, sung by Gonzo, who was in love with Camilla the Chicken. Gonzo penned lots of romantic songs like:

Camilla, you're sweeter than wine or vanilla, Camilla....

So you see that men are just swept away by the name Kamala. Kamala Harris has had lots of swooning men who tasted her not so forbidden fruits, and why not, she is an attractive woman, and after that horrid puffy face injections which made her look like a monster, she recovered and is her lovely self, even if she has cackling binges in trying to control her psychology to the bad things she is told as Vice President, as he delicate nature has not prepared her to handle this real political life.

She has been the daily negotiator with foreign leaders. It seems that the Chief of Staff runs Bidencon with Susan Rice, but Fag Blinken puts his gay seal on foreign policy, as Merrick Garland hunts down Americans at DOJ and Joe Biden recovers from his treatments and few hours outings, as he gets stronger as Obama influence gets weaker in the Biden regime.

As this blog noted though Kamala Harris for some reason vanished in the month of May. Stories leaked her staff was aghast that Bidencon was sending her to the impossible border situation with all of it's dangers. She rightly hid behind her Secret Service screen as she is President in waiting.

There is something though in Bidencon is once again sending out Kamala Harris into the public. It is another impossible situation as was the border in Kamala Harris is being sent out to ReVaxNiks to convince them to get the vax which has shown Anthony Fauci has been lying and that synthetic prion is a real killer as no treatment is available.

President Biden on Wednesday claimed credit for the success of COVID-19 vaccinations in the US while assigning Vice President Kamala Harris to lead a “tour” of the South and Midwest to win over stragglers reluctant to take the shots.

It would seem a prudent thing for Vice President Harris to once again choose to shelter behind her Secret Service wall of security as this is a mission which is a political no win for which she would be blamed. It also is the reality of areas of America which are not democratic voting areas, meaning she could be endangered, and that is one of the last things the United States needs at this point. For the Right it would unleash Domestic Terrorism laws just waiting in Congress and unleash AR 15's weapons bans if some frustrated nut acted out.

This is an odd political plan from Bidencon which is coming from the Chief of Staff, Susan Rice and is signed off on by Joe Biden. Kamala Harris is best suited to the urban, intellectual and elitist groups. She is not a product of the hayseed and backwater.
It would be better in these times for Pedo Joe to send in trucks of Budweiser as he is doing that, open up NBA and NFL venues already doing that, and having Kamala Harris do a virtual presentation from her home thanking those who attended.