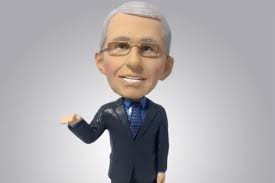 I happened upon the Podcast, yes Podcast of Chelsea Clinton, a woman who really has not amounted to anything in her life, except for being more morally sensible than her adopted father, Bill, and her birth mother Hillay. But in this Podcast where you do not have to look at her, she has a really good broadcast voice and she interviews Dr. Anthony Fauci with skill. Granted Chelsea has prepared questions and allows Fauci to sell his propaganda lies, but all the same, Chelsea Clinton did a good job. She certainly outclassed Meghan McCain, who is about as worthless as John the hero McCain as a Senator for America.

It was this interview with Fauci, that Chelsea Clinton admits she is a dead end for the biological weapon out of Wuhan as she has been vaxed as are most of the lemmings of the East Coast. The problem in the interview is not the admission, but the things Fauci states unchallenged.

“I’ve been the object myself of a phenomenal amount of hostility merely because I’m promoting what’re really fundamental simple public health principles.That seems astounding that that would generate a considerable degree of hostility, but it is.”

I took a few moments, which Chelsea Clinton could have engaged in, and found a few of the problems with Anthony Fauci. This man has emerged as the spokesman for American and world health, and in each of the stories like wearing a dozen face masks, when states like Florida and South Dakota had proven that open contact was not causing problems in those states compared to lockdown liberal states like New York and California. That is how distrust and anger built in Americans against Anthony Fauci.

Anthony Fauci May Not Have 'Lied' About Face Masks, but He Was Not Exactly Honest Either

The COVID-19 adviser's unsatisfying explanation of his conversion feeds skepticism about the value of a sensible precaution.

Fauci tells Chelsea Clinton that we are not going to be safe on this planet until this virus is under control. Fauci says RICH AMERICA must fund this program which again, he is earning a fortune off of in holding patents and promoting those vax centers which are raking in billions.

It is the addition of Fauci being a spending whore, when the world is recovering from this virus, not from the vax, but from natural progression. In fact, the only thing Anthony only said which was honest was that this virus would be gone in 2 years. That is because this virus is downgrading as viruses do, even weaponized viruses as that is the law of nature.

Behold though more of Fauci's advocacy. First children do not die from this biological weapon, Yet Fauci wants children vaxed and the vax is causing horrid reactions in children as well as adults.

Fauci covered up that Chloroquine was a treatment. Fauci states that 590,000 Americans died from the Covid. If that is the case, the use of Ivomec or Hydrochloroquine with zinc would have saved the majority of those people. Yet Fauci with Big Pharm suppressed these treatments for worthless expensive anti viral treatments.

Lastly, Fauci at the beginning of this, told President Trump and the world that there was nothing to be concerned about Coronavirus. That is 360 degrees opposite of Anthony Fauci today. That kind of being wrong destroyed economies and lives, and Fauci is responsible.

Fauci's future is to BUILD UP this medical infrastructure which failed the world, due to people like Anthony Fauci. Americans, or the RICH COUNTRIES should donate to poor countries, that is in the multi trillion dollar debt of America not a feasible programme. Yet this kind of Marxism is what drives Fauci ahead, spend more money, your money to fix something that nature is already fixed.

Fauci says "we should be encouraging" kids to get vaccinated, but ...

May 13, 2021 ... Anthony Fauci is urging parents to get their kids vaccinated against COVID-19 — but stopped short of saying they should be a requirement for ...

Jul 31, 2020 ... A Henry Ford Health System study citing progress treating patients with the anti-malaria drug hydroxychloroquine is flawed, and should not be ...

Anthony Fauci has a notorious history and a failed present. Most of the leadership of the medical centers have resigned, but not Anthony Fauci. He keeps talking in the hope that the revelations of his lies and deceptions and his failures exposed by Tucker Carlson and others, will be voiced over and this old man will maintain the fiction of his legacy.

Personally, on what I have read in actual information on Anthony Fauci, his connection to funding the Wuhan lab, his connection to Bill Gates and industry, his vendettas against researchers who did not bend the knee, his incompetence on masks and treatments, his knowing in emails that this virus was man made, and then lying to the public, is a reality that he funded research in China which killed masses of invalids and destroyed the world economy, and brought down a President of the United States. Is that the stuff of Nuremberg Trials?  Anthony Fauci was not stomping on pregnant Jew women to get them to begin delivery, but he certainly has been injecting synthetic prions which are stated are poisons and toxins and there are poisons and toxins in these vaxes.

Again is that Nuremberg Trials? The Lame Cherry would advocate such trials for the simple reason a Court should have evidence presented before it, to make a Judgment if Fauci and his cohorts created the first global holocaust in history.

Anthony Fauci is protected by the 1% so his ending up in a real trial is not a likely event, no more than Hillary Clinton. It is a reality though that Fauci is the man who kept saying the sky was falling and was pulling on the rope to bring it down, as he has an entire 1% propaganda machine attempting to drown out reality for the Fauci history which does not match the evidence.

In Reverse Speech on Rense.com, David John Oats, had a reversal on Fauci which appeared here, which proved that Fauci knew Coronavirus Wuhan was man made and used as a first strike biological weapon by the Chinese. That is the stuff of Nuremberg and Fauci lied to the US Senate and Rand Paul received death threats and white powder by Fauci's thugs in trying to shut up the Truth from coming out.

Chelsea Clinton, does have a pleasant voice, but with her Disney sponsors, where the CDC turned loose a measles outbreak at Disneyland for funding, is a most unpleasant reality that this daughter of Bill and Hillary is propping up a regime official who has endangered Americans and the world.

If Chelsea Clinton will not do her Podcast job, then let there be a Grand Jury, to see if Anthony Fauci and those was involved with belong at Nuremberg.