Your first lesson is, you need two pipe wrenches. First lesson is you can do more with a big pipe wrench than a small pipe wrench. It would be lovely you had a big vice mounted securely to help in your projects, because you are going to soon discover that fittings are corroded tight and put on by some Samson now long dead. For my work, I had a 3 and 2 foot long pipe wrench, and I can tell you that I lifted the table the vice was mounted on, and started ripping loose the bolts holding the vice down in this project as you are going to find out that fittings are tighter than your little muscles ever dreamed they could get. 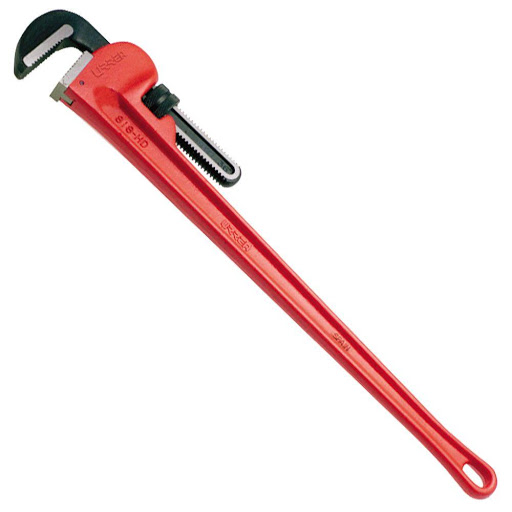 So  get two pipe wrenches, better in 3 foot long, but a 3 and 2 will work as long as the two is holding and the 3  the one doing the leveraging. To get an aluminum nozzle loose from it's fitting, I litterally came to the point of, "I am gong to bust this damned thing or it is going to come loose". It came loose as gas corrodes metal horridly, but it should never have came to that.

Pipe wrenches come in steel and aluminum. as the ally is lighter weight. If you can afford the light weight aluminium, it will be appreciated as you will be carrying this to your spoils piles.

Now for some million dollar knowledge. To keep joints from leaking, you need teflon tape which is white. It also keeps threads from seizing up in trying to get 50 year old joints apart. Modern tape is shitty, but it is all there is, like China for now.
When you put the tape on, you have to have it laid on the threads the same way you are turning, so it feeds into the female end, or it will bunch up and turn out. You will get this the first time you mess up, so when it messes up, you have it on wrong, so put it on  the other way.

Here are some pictures TL took of our fuel barrel projects we got rented out to get into shape.

Getting barrels into shape, means draining out the crude inside. Save it, as it may burn to keep you warm or it may work as a lubricant, and just figure they not going to be distilling any more for ever.

Hot water works with soap, drain it, then flush it out with water. You still will not get it clean, as these barrels are old, and have crude, rust and whatever in. The secret is keeping your barrel at a small slant to the back, so the crud settles in the back. You can get a filter to put on the hose, if you can afford such things.

OK to start off with you need a valve to shut the fuel off and you will need and extender pipe, which most tanks will have in your rummaging the country or if it before the meltdown a junk yard or supply store. 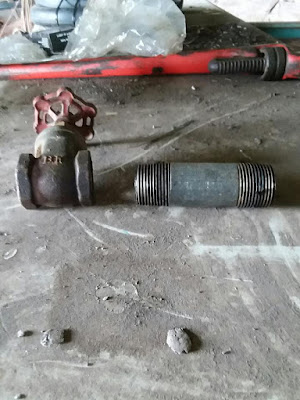 This is what it looks like put together into the valve, and taped for the other end, which MUST be an elbow to keep your hose from collapsing at the angle. Again more million dollar knowledge from the Lame Cherry 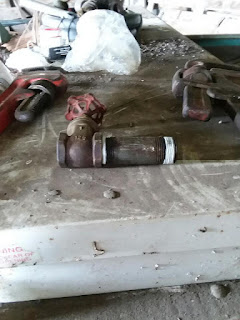 This is what teflon tape looks like. And so you know, I had to get from the junk yard two valves, and their assemblies came with as the valve top was off the one and the other was small opening as it was for fuel oil. You want at least a 3/4 inch to 1 inch size for things like fuel. It is different when it comes to fuel oil which burns in a stove, then less is better or things blow up. 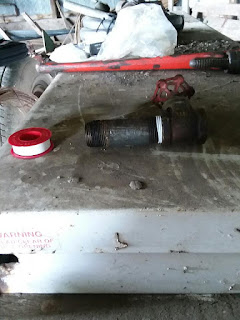 This is a close up of the hose having teflon tape on it, to be mounted into the elbow. 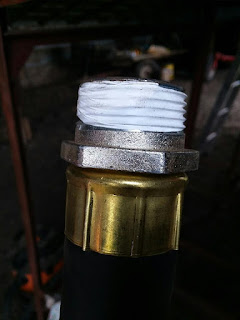 This is what the valve and pipes should look like on the tank, before the elbow is screwed in. Do not over tighten this or your valve will be at an angle. There is a knack in knowing what is too tight that your strip the threads and then you are jack shit done as the project is over and too loose so the fuel leaks out. Yes you are not as genius as you thought you were. 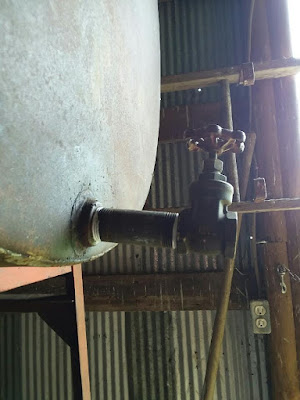 This is the finished project with the elbow on and the gas nozzle in place. Again you have to pay attention when tightening things up, so the hose is not kinked when you hang the nozzle up. All of this just does not happen, any more than barrels just line up perfect. For barrels I had to carefully rock them into place with 2 x 6's under then in case they dropped off the beds they laid in. 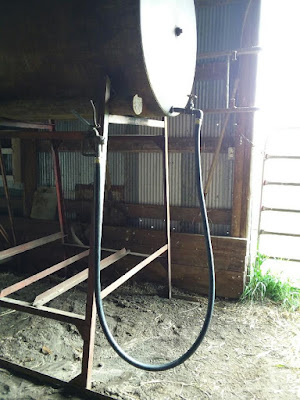 One more thing. You can put railroad planks under these barrels to keep them from settling in wet soil. Raising a barrel higher increases the fuel flow rate. Also the nozzle in the photo I found in a pile of junk on a junked truck. I had to take it apart, used WD 40 on the plunger, but so you know, the nozzle cap has a spring inside which is how the handle springs back, Yes DUH, until you let it fly out and get lost in the grass. It is not under great pressure, but enough you should pay attention. Inside the nozzle is basic, just the plunger which lifts a plastic plug to let gas in and out. Got this one working perfectly in a few minutes. New nozzles are 95 dollars, hoses are 45 so you can see why I use salvage parts.

Last million dollar knowledge, CAP the nozzle end. We use rubber caps for hydraulic hoses, or you will get wasps building nests, dust inside, bugs, and the wonder of rain, none of which does well in an engine or fuel line, which of course will plug up when you are running for your life or it as 500 degrees below zero.

That is your Gomer lesson in fuel barrels and fuel attachments.