When a Big Black Ass is a Political Anchor 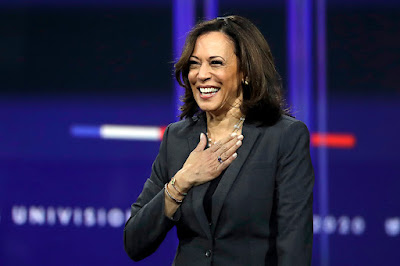 From the bottom of my big black butt, thank you

Kamala Harris, the birther who is not natural born and therefore can not be Vice President or President is now facing what the Lame Cherry began hinting at in the quatrain months ago, and as the tourists at DIA Breitbart are finally caught up that Kamala Harris is being sabotaged as this blog first reported, it is at this time to understand the diversion of Peter Buttplugs.

With Harris’s history of “mistreatment of employees and dissent” before entering the White House, the establishment media have begun reporting on the infighting and “sabotage” impacting the office of the vice president.

“It’s a whisper campaign designed to sabotage her,” Biden’s senior adviser Cedric Richmond said, admitting Friday to the Hill the infighting is real.

Axios reported Friday Harris’s aides are panicked that she is “fucking up” and perhaps “shouldn’t be the heir apparent” for 2024’s presidential race because she “could not defeat whomever the Republican Party puts up.”

On Wednesday, a White House staffer told Politico Harris’s aides “are thrown under the bus from the very top, there are short fuses and it’s an abusive environment.”

Other White House aides told Axios Harris’s office is a “shitshow” with “poorly-managed … people who don’t have long-term relationships with her,” an overall “operation sometimes visibly out of sync with Biden’s.”

The establishment media additionally wrote Friday, “2024 is the elephant in the room. … While Biden aides overwhelmingly believe he’ll be the Democratic nominee, they also know he’d be 81 when seeking re-election.”

For all of the whittling away at Pedo Joe Biden, this blog warned all of you that Joe Biden is not going to go quietly into the night. Biden via image Obama had Kamala Harris foisted upon him in this election theft as a placating bone to the soon to be erased Black culture in America and replaced by Mexicans.

Kamala Harris is a devious and cut throat politician who gets things, but she is also an incompetent air head in being lazy politically in not putting in the time to bond with the public.  She is simply a stupid woman like Obama was a stupid Birther who did well when other politicians were doing the hard work for their careers, from Willie Brown for Kamala to Nancy Pelosi for Obama.

Pedo Joe is also a devious and cut throat politician, who is stupid, but with Biden his horse is the criminal organization behind him. Biden has faced Obama who put him into office so Obama could get his protege Kamala Harris in. Biden has had Obama inc moving against him with the DIA, but Biden remains, and in fact in a counter operation, it is Biden who is winning that kampf, in Biden is getting rid of the Obama legacy and that includes Harris, as Joe and Jill going up the hill, want to fetch their own protege as Vice President for the Biden protection of Hunter and the Biden criminal legacy.

Pedo Joe Biden is not going away easily, nor is Kamala Harris. This is not couched in 2024 AD in the year of our Lord as the 1% will not allow this weakness to fester until more fake elections. The 1% will allow Biden to flounder around in order to entice Russia and China to attack, and keep Biden around for Buttplugs more looting of America, but they are not going to have surprise incompetent trolls appear like Buttplug as this is the total shift of the world in what is happening. You witnessed what a moron Harry Truman was in mishandling the victory of World War II. Yes American defeat is what the next world war is about, but not American annihilation as America still needs to be a piece on the board to wave at the other shattered nations.

One must no longer be American Centric, in thinking of things you would do. You must now comprehend the world in Wall Street bankers who sold out America to Rothschilds for Civil War and two World Wars, which had presidential brain bits of Lincoln and Kennedy in this foreign intrigue. America is Amerika, it is the reflection of relentless socialists and communists as Adolf Hitler and Joe Stalin who are not mad men, but cunningly shrewd, which in Protestant morals is evil, but it is what politics are in the outside world.

Joe Biden had a purpose and has a purpose. He was to have the election stolen for him. No other politician of note would have gone down with what 2020 was as their legacy. A stolen election set up to hunt down 100 million Americans in a purge. No normal democrat would want that, but Joe and Jill are accepting of it in their amoral state. So Pedo Joe has a purpose, to gain power for the 1%, criminalize 2/3rds of America, vaxicide the population and to install the overseer of this death camp called America as wars erupt. Biden has a purpose, but Joe and Jill's purposes are to pick their own successor, as stated to protect Hunter and the Bidens, not to further Birther Obama with Birther Harris, who is someone you could enjoy a light lunch with or have sex with, but she is not presidential, and only secretarial in delivering messages to foreign leaders.

The reason Kamala Harris is being difficult is Bidencon has been putting her into dangerous and lethal situations which were no win politically. Going to the border placed Kamala Harris in physical jeopardy and as Biden was not going to stop the invasion, but increase it, Harris would be blamed. The same with the vax intimidation. Sending Kamala Harris into redneck Midwest and South was not anything she would win at, in fact she was in danger as the FBI keeps it's moles active in promoting White Supremacists, and this places Kamala Harris in danger as this blog has warned, as no one who is truly Americans wants anyone harmed, but hat returns us to the fodder that socialists and communists make of their own people by making them expendable for a political dynamic in a gamechanger.

The Nazi were ready to reach shelf life on their Ambassadors to Austria and Czechoslovakia as the Soviets did Trotksy for political reasons. Those who would be blamed and intimidated have already been chosen as on the endless list of staged events which has become corrupt America as Oklahoma City, Waco, Ruby Ridge, Hutatree, Charlottesville, January 6th. Game changing politics require big events as the trump card for the final steps.

Joe Biden understands he has a purpose as he deludes himself to believe the autotron he is will still be parts functional by 2028 AD in the year of our Lord. After President Vladimir Putin met Pedo Joe, Putin's response was to tell the British that Russia was going to sink their navy and no one would care as America is a has been state. Joe Biden deludes himself into believing in 2024 AD in the year of our Lord, but the Eurasians have set a course by what the 1% have initiated to not have a world around for Joe Biden to have elections stolen for him or little children for Hunter Biden to perv on.

Biden's purpose is to remove Kamala Harris for Biden's "choice" by the 1%. That choice reveals that the Afroid is no longer viable as a political threat, so the 1% and Biden deem this West Indian Indian Birther in Harris a non event.

Viewed from the 1% time line, they never looked to Biden as long term. Biden has completed what his shelf life was intended and that was to steal and election and hunt down Americans. For the 1% Pedo Joe is as a thing of the past as Biden's view of Kamala Harris. So in the scheme of the intrigue of the 1%, Biden's purpose is to install an unelected replacement for the current Vice President, and once Pedo Joe has accomplished in installing the 1%'s selection to replace the Pedo, then all that is left on the progression of the 1% is to install their choice into the White House, as was intended all along in this election theft reality.

The tourists at the DIA Breitbart are conditioning you to expect Kamala to not be around later, so you believe this as the left is lusting after Buttplugs in feces penis scent, but no one who appears in media ever ends up or lasts in the positions, as it is always diversions and in the quiet calm of shock, the troll appears who has been the choice of the 1% all along.

There is a time line that resets and keeps resetting, in America will not have unelected people in charge, but appointed stooges in charge.

There is a compression in foreign events will soon overtake domestic events. While I would never vote for Kamala Harris, she is in the line of succession, and her gambit is to survive the Bidencon political macabery against her, hiding behind the Secret Service, as the clock runs out on Pedo Joe, as Kamala Harris has four allies who will give her the opportunity to  be acting Birther President, and that is China in Taiwan, Russia sinking the British fleet and increasing their boundaries to allies Germany and Austria, Donald Trump who the DIA is moving ahead politically in this stage drama, and the 2022 election theft which will expose Biden as feckless.

Kamala Harris just needs to hide behind her Secret Service, not say or do anything, and her big ass will shove queer ass Buttplug and all out of they way, because she is the Vice President.