The Taliban of Ice Cream Cones

Most people are concerned over the Taliban trolling Pedo Joe Biden on ice cream cones and I have seen disdain over the Taliban re enacting that Iowa Jima Marine thing. It seems to me the Taliban is acting more American than Americans, you know the wokesters.

You don't see the Taliban posing with bowls of rice and chopsticks from China. You don't see them posing with bottles of vodka from Russia. Nope the Taliban is really into America. Americans have killed those bastards, Americans re installed butt boy sex, and have turned their country over to starting World War IV, and those Taliban just love America. They have satire down better than Steven Colbert and all that other raisin nut sized sloppy Biden worshipers combined.

The Taliban is just fucking with ya,  that is what would be said in America, you know the areas that vote American, and not those Biden election theft metro areas. The Taliban is just giving America shit because the Taliban gets the bulge on for the United States. If people are giving you the business in real America, they like you. The problem is when they are not saying anything, That means they hate you.

Let's face it. The people with brains hated Joe Biden and never voted for him which was the majority of Americans. Now the rest of the world is coming to the realization that they hate Joe Biden too. The Taliban is showing America love in unity in mocking Joe Biden, because they hate Biden too, and that is after Biden gave them their country back, gave them like a zillion dollars of military equipment and is taking in all their anus sex scented homosexuals.

The Taliban simply can not be bribed and have joined with Americans in hating on Joe Biden. 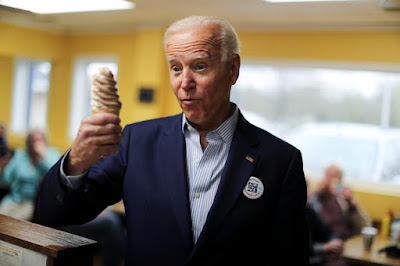 As I said I'm done with politics. Noper the Lame Cherry and all the readers here are not ever going on no protests, not being domestic terrorists as all we do is obey laws and pay our taxes as none of this control of America interests us at all.

The reality is though that myriads of people across the globe look to Lame Cherry daily, yes hourly on what they should think on subjects, so they are pondering things correctly. All this is unimportant compared to the problem of ice cream cones, in the sacred twist as something is extremely wrong in the Republican form of representation of chocolate and vanilla ice cream of an ice cream cone.

See the first twist I had, I ordered it myself. I was paying attention to things and someone said twist, as before all I ate 99% of the time was chocolate ice cream cones. Always the extra large as I love ice cream.

So I thought in Protestant contemplation if something so exotic is something that I would dare be a part of. I mean Neopolitican ice cream is nice, but they have their places, strawberry, vanilla and chocolate. I never had fear of Neopolitan, but this twist stuff seemed like something unnatural, but I decided to show true grit and order me an extra large one.
I think this was Dairy Queen. I always wanted Dairy Queen franchise and ours was turned into a Taco Johns or some other Mexican thing, but I  really liked the intimate swirl of the vanilla and chocolate as it was just pretty. Pretty foods all taste better. 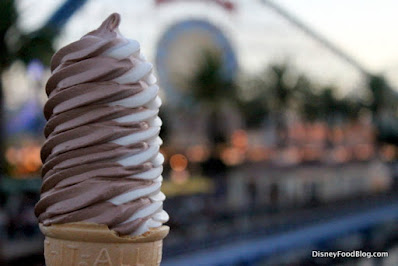 I ate these always, and sometime in the ordering and eating, I became upset as my pretty swirl became this half and half shit. I mean some psychotic was behind this, as if they ain't got this ice cream split up the middle then they got it blobbed one flavor on top of the other. 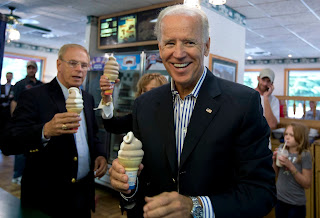 I mean I'm not going Biden senile, but I do not want to lick one side, then lick the other to get chocolate or vanilla. I also do not want to eat one flavor blobbed on top and then switch as my tongue will forget what the other tastes like after a few licks. I need reminders as the difference just enhances the experience.

When you are senile like Pedo Joe, you get a thrill out of pinching little girl nips and of course are pleased that you can even lick an ice cream cone. Biden is impressed with just the shape, just puzzled by it, like it is a Gordian Knot. It is just too complicated for him to understand so he just grins like a senile old man.

Then there is Biden not giving a damn what the ice cream looks like. Look at that below. I would no more eat an ice cream cone that looked like that, than I would vote for Donald John again even if Ivanka was making me homemade ice cream. 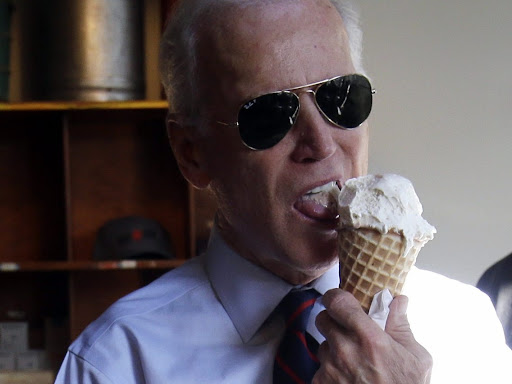 Thing is these sexual deviants all have no affinity for ice cream cones. Look at Biden below having one in each hand. No one eats ice cream like that as it drips and melts. It is just not normal. Look at Birther Hussein, cheeks bulging like he is coming off and African famine and his ice cream is droopy. That just is sad as ice cream should be proper. It is something of civilized peoples. You can always tell civilized people by their ice cream and how their cones look. See look at the Taliban. Perfect ice cream and perfect cones. You can tell allot about a civilization by their order and the Taliban has orderly ice cream cones. They are just like Germans in their precision. 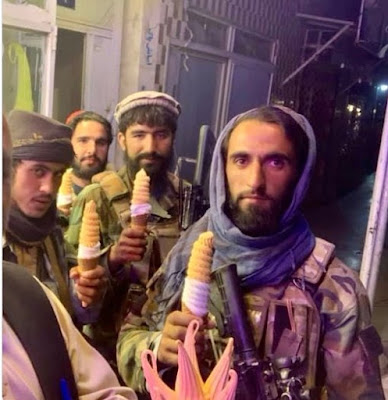 I do see a problem though with Afghanistan. Their Goddamn chocolate ice cream is orange. That ain't chocolate, not even Dutch processed chocolate that is sometimes red. No wonder the Taliban are holding out this olive branch or cone of peace, as they suffer like Americans in fucked up twist cones, and let's face it, America can come to the aid of the Taliban in their cones are pointy, like a vibrator or dildo. No one who is normal wants a pointy ice cream. You try and lick something like that and it will bend like a limp dick. You stick it in your mouth and you bite it off, and you think you been robbed as it is gone. Eat the chocolate off and all you are left with is White, reminding you how God loves White People best in God gave Jesus to Whites and only that wool wearing Muhammed to Muslims.
Ice cream needs to be plump, The Euclidean beauty of an ice cream cone is on a hot day you can lick that width and not bend it over.
The Taliban have bend over cones.
In that America should enter negotiations with the Taliban to unite in ending the ice cream deficiency they have. Their chocolate is wrong colored and their cones are too small and their ice cream is to narrow.
America has like problems as Biden's chocolate looks grey.  Chocolate must be pretty and smooth and the colour of like milk chocolate. None of this grey shit and I notice far too often that American chocolate looks like it is both white and dark, it just looks rough. That is just unpleasant, but primates like Biden go for such things as they marvel it is cold and think it is some magic.
So the Lame Cherry concludes that Americans and the Taliban have a great deal in common. We both do not want to be hunted down by the American police state. we both do not like Biden, as no one likes him, we both want Americans out of Afghanistan and we both are not pleased with the evil forces at work who have bastardized ice cream cones.
If both the Taliban and Americans do not solve our ice cream swirl problems there is going to be a world war which will not leave an Afghani of any race alive in those lands. You can't save radioactive glowing Muslims with Jesus. Can only send them to hell and hell only has ice cream cones that Pedo Joe and his kind would like.
Nuff Said